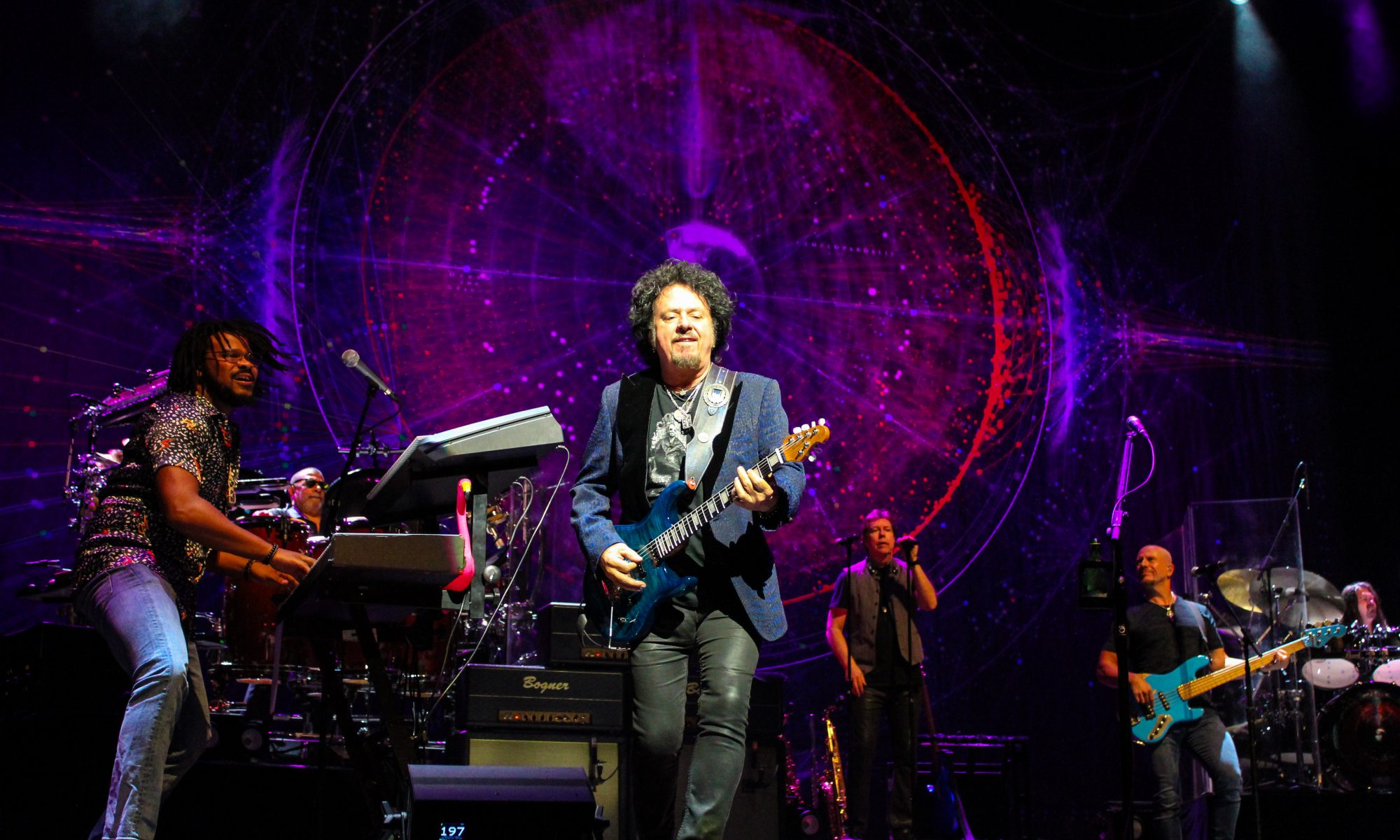 Toto brought their 40 Trips Around the Sun Tour to the Eccles Theater in downtown Salt Lake City on September 24, 2019. I felt like I was running late so I ran into the theater. However, when I got inside the Delta Performance Hall I could see the crew still working on the instruments so I knew I had more time.  As I made my way down the aisle to the front of the stage I could see and feel the excitement among the people.

When I got to the foot of the stage I chatted with the people in the front row.  I will usually tell them that I’ll only be there for the first three songs and I’ll be moving around in hopes to not block the view that I’m sure they paid handsomely for.  Over time I have felt the tension of, “Is this guy going to be in my way all night?” Or, “Oh no, I can’t see!”. So I’ve felt that just mentioning my photo gameplan usually eases the tension.  It also gives me an opportunity to visit with these fans before the show. I asked them if they had seen Toto before. Some saw them back in the 80s and for others, like me, this would be their first time seeing the band.

A man walked up to the stage and took a look at Steve Lukather’s pedalboard (for his guitar effects). I asked him if he played. He told me he’s played for years but his pedalboard was only one row. Lukather’s board looked like it was three rows deep but probably only two.  We discussed the artistry of how he was going to make his way through all of those pedals. In the middle of our conversation, the room went dark and Toto took the stage.

Toto opened with “Devil’s Tower”.  The audience couldn’t decide whether to stand up or stay in their seats.  This went on throughout this first song ultimately deciding to stay seated while cheering loudly. It was so surreal to be up by the stage and looking at this band that I’ve seen on TV my whole life.  Like I mentioned, I had never seen Toto until this show. The closest I’ve come was seeing Steve Lukather perform with Ringo Start’s All Star Band where he performed a few Toto songs.  But it was so cool to see him with his band and to see Joseph Williams strutting around the stage.

People didn’t remain seated for long.  The moment the first note of the second song was heard the entire audience leapt to their feet for their hit, “Hold the Line”. Take a look at this crowd shot.  I took this when people began standing up. Look at their faces. Look how happy they are! I usually don’t get crowd shots but I couldn’t help but try to capture the feeling in the room and of this concert.  People were so happy. Isn’t that part of what going to a concert is about?

Following “Hold the Line”, Lukather greeted the audience and welcomed everyone to the last leg of their 40 Trips Around the Sun tour.  He mentioned that at this point it was actually 43 trips around the sun now.  From there we were off and running. They blazed their way through songs like “Lovers in the Night”, “I Will Remember” and Jake to the Bone”.  I was amazed at how strong Joseph Williams’s voice still is. It was almost like listening to the album but in some ways better because the seasoning in his voice has made it that much richer.

It’s difficult to see a show at Eccles Theater and not comment on it.  Just days prior to seeing Toto I was at a totally different type of show and the venue fit the vibe perfectly.  Here I was at Toto and I can’t imagine having seen them anywhere else. I was really happy when Joseph Williams walked out to the wings of the stage.  No one seems to ever do that and I’ve always wanted to see it. I was delighted he did that and so were the people whose seats were off to the side.

When I was finished with my photos I found my seat in this show in Box F of all places.  Box F on the left side of the theater looking at the stage. My view was amazing. No one was in front of me and no one was behind me.  I could see down at all the people in the orchestra seats. I enjoyed looking at them and how much they were enjoying the show. The only awkward thing about sitting in the box seats for a concert is when it’s time to stand up and get into a song, it’s hard not to feel on display to the rest of the audience.  The truth is, no one was looking at me. Why would they be? But when Toto broke into “Rosanna” and I stood up and danced and clapped along, I quickly realized I wasn’t hidden among the rows of people but in an individual chair along the Box F railing for all to see. Fingers crossed there isn’t any embarrassing video of me out there dancing to this song.  I mean let’s be honest. It’s virtually impossible to not get into it when you hear “Rosanna”. Trust me, I wasn’t the only one lost in the moment of that song. How many times have you heard it? And here we were hearing it live! It was a really fun moment in the show. Fun fact, “Rosanna” was written about keyboardist Steve Porcaro’s one time girlfriend Rosanna Arquette.

Following “Rosanna”, Toto sat in chairs along the front of the stage for a “Storytellers” segment of the show.  They told us what an honor it was to be here “on this special night in this gorgeous theater.” They then told us they would share songs across the scope of their careers.  They began with “Georgy Porgy” off of their album Toto. Then original member Steve Porcaro told the story of the next song. He said he wrote it about his daughter being picked on by a boy at school.  When hearing the details he realized it was because the boy liked her. I was surprised when Toto then began performing “Human Nature” a hit song for the late Michael Jackson. It’s amazing that Toto has done so much as a band and yet written and performed for so many others.  Look it up, they’re all over the place. Songs you’ve loved forever and had no idea they had a hand in. It’s impressive.

The storyteller’s segment ended and the band fired things back up.  I again marveled at Joseph Williams’ voice and his dance moves. The guy can move! I’m sure this is old news to true Toto fans, but I was shocked to find out that Williams is the son of legendary composer John Williams!  During band intros, Steve Lukather mentioned jokingly that when they were kids he would ring Williams’ doorbell and it would always be to a new melody John Williams had been working on. Then he played a part of the Jaws theme.

A major highlight for me and the crowd was when Steve Lukather dedicated Toto’s cover of the Beatles classic, “While My Guitar Gently Weeps” to its author the late great George Harrison mentioning that it was he who inspired Lukather to learn the guitar.  When the song was over, the entire audience rose to give the band and particularly Lukather a standing ovation.

The moment finally came.  You know what I’m talking about.  Even Steve Lukather knew how much the audience was anticipating this.  He said to the audience, “Do you want to hear that one song? Are you ready for that song?”  We all knew what he meant and so do you. “Africa”. The answer was YES! Yes, Steve, we were all ready to hear “Africa”.  The song has had a huge resurgence as of late due to the Netflix show Stranger Things and Weezer’s cover of the song.  It did not disappoint. For one, the band sounded amazing. The crowd could not have been singing louder. Toto even extended the song a little to give the band an opportunity to shine and to give the audience their chance to sing.  It’s hard for this not to be the major highlight of the whole show.

Toto is an extremely talented band.  To have been around for over 40 years is no easy task.  Missing was original member David Paich who has decided to stay home from touring due to health reasons.  It would have been great to see him but we all hope he’s doing well and can join the band here in Salt Lake City next time.  He can rest assured that the rest of Toto are representing themselves brilliantly.