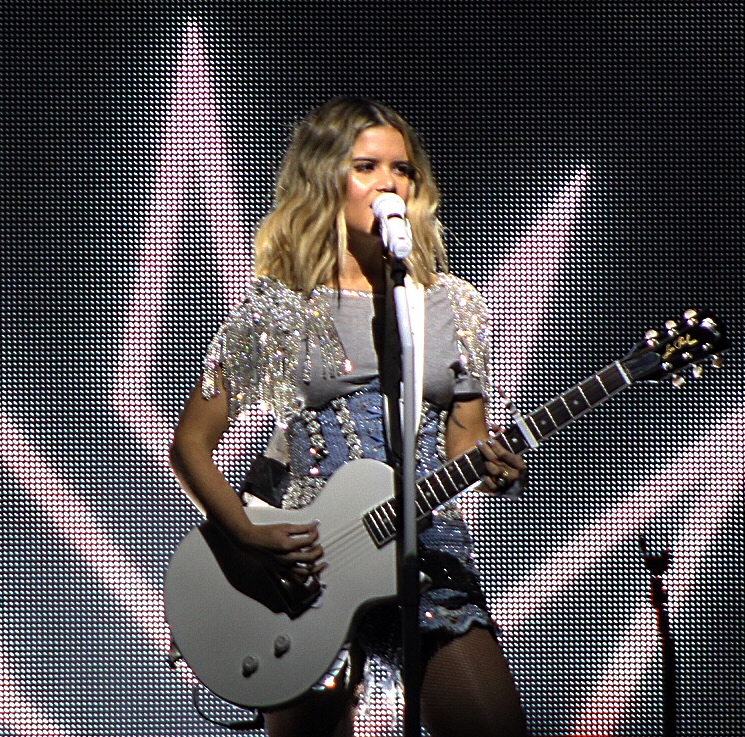 Just five dates into her second headlining tour, Maren Morris made her first stop in Utah as a headliner on Tuesday night, bringing her Girl: The World Tour to The Union Events Center in Salt Lake City.  Morris had made previous stops in Utah as an opener for Keith Urban and Niall Horan but never as the headlining act. Walking to the venue I could tell from those walking beside me that this was a really big deal for Maren Morris fans.

Now I don’t have a lot of history with Maren Morris.  I know she’s a huge star. I know she sang with Dolly Parton at this year’s Grammys.  And I know she has a bunch of country hits, and of course her crossover hit “The Middle”.  But to be honest, that was about it. So I was really excited to see what was in store for me at a Maren Morris concert.

As I walked through the gates of The Union, I ran into an associate of mine.  She is employed by another venue here in town so it was a surprise to see her here because well, I’ve never seen her anywhere else other than inside the venue she works at.  We exchanged pleasantries and I asked her if she was here for work or was she a Maren Morris fan. She told me that she was a huge Maren Morris fan. I asked her what I should be looking for at this show since I have limited Maren experience.  She told me that anything off of Maren’s new album would be awesome. She told me that her new album was excellent so expect to hear a lot of it. She then stated that she really hoped Morris would sing “The Middle”, a song she collaborated on with DJ, ZEDD and EDM duo, Grey.  I stated that there was no way she wouldn’t do that song. It is such a huge hit for her that she had to play it. We crossed our fingers and went our way into the show.

My associate was correct, Maren’s album Girl was heavily featured in this concert.  In fact, I think all but one song off of the album was performed.  Justifiably so. Girl was released on March 8 of this year.  And from what I understand it is smashing digital streaming and download records for a female country artist. Every time a song from Girl started, the audience went crazy.  So it was pretty obvious that the album is a huge success.

The show began appropriately with the title and opening song of the album, “Girl”.  At first, Morris appeared in silhouette, and when the spotlight hit her the crowd roared.  Almost to the point of drowning out Maren’s vocals. She appeared at the top of a stage riser with a white electric guitar.  She stuck to the album track listing for the second song performing “The Feels”. She then broke into one of her singles off of her first album Hero, “80s Mercedes”.  The female dominant crowd sang along as if the song was written about them.  Even if they weren’t born in the 90s like the song indicates.

I was surprised at the broad range of the audience.  Sure, college-aged to preteen females dominated the room, but there were fans that ranged from eight-year-olds to folks in their seventies and everything in between.  I even saw groups of men there together singing along to each song. So it’s safe to say that while the audience was female dominated, Maren Morris can draw fans of all ages and genders.

When Morris performed the song “All My Favorite People”, a song she recorded with Brothers Osborne, she invited her opener, former contestant on The Voice, Cassadee Pope on stage to sing the duet with her.  They sounded awesome together! They looked like they were having a blast on stage and their harmonies were really tight. There’s something exciting when a surprise duet happens on stage. I remember seeing Stevie Nicks a few years ago, and she brought Chrissie Hynde of the Pretenders on stage with her to sing “Stop Dragging My Heart Around”.  A duet Stevie originally recorded with Tom Petty. No one in the crowd expects it to happen, and when it does there’s euphoria in the venue.

While songs from the new album sounded great and were more than warmly received fans still wanted to hear their favorite songs, even if they were from just a few years ago.  So the hits off of Morris’ debut albumHero seemed to get the strongest reaction from the crowd.  The two songs that stood out to me were “Rich” and “My Church”.  Two very different songs, but both very high energy, and both very worthy of a sing-along. Which the audience did very loudly.  I’ve said this before and I’ll say it again, that has to be the best feeling in the world having an audience singing every word of your song back to you.  Maren definitely seemed to enjoy it.

Throughout the concert, I wondered to myself ‘Is this pop or is this country?’.  The truth I settled on is it’s both. Maren rose to fame in the Top 40 Country world.  But as I mentioned earlier, she has had success in crossing over into the Pop world. Maren creatively and successfully dances on both sides of the very thin line that is Top 40 Country and Pop music. There are songs that are very much a country song, and there are songs that are 100% Pop.  But then she has these songs like “The Feels” that share elements of both. I think she’s found the perfect marriage with both genres of music. And from the way the audience reacted to these songs, I think they approve.

Maren closed the night with what has to be her biggest hit, “The Middle”.  The crowd, of course, went nuts when they heard the first note. Because Maren has a full band behind her, an extremely talented band at that, she can perform this song with more than electronic way it’s originally recorded.  I’m not saying it was better or worse, it was just cool to hear a live version (in every sense of the word) of the song. The song ended, bubble machines shot out thousands of bubbles and just like that the show was over.

It was clear that this was a huge deal for so many fans.  I usually linger a little after a show to see everyone’s reaction and hopefully get a photo of the setlist (which I was unsuccessful in doing for this show.).  While I lingered I was asked at least ten times to take photos of groups, duos, or a kid with their parents at least ten times. I was happy to do it. I was able to ask them what they thought and I received reactions like, “Best show ever!”, “She’s so good!”, “OMG, I love her so much!!!”, and “I didn’t think I would like it, but I had a great time”.  The last comment was from a father who had taken his 11-year-old daughter to her first concert.

I wasn’t sure what I would think about this concert, but I left feeling impressed with Morris’ talent both as a performer and a singer.  I have a feeling she’ll be back to play Utah many times in the future. And if she’s not a headliner every time, I’ll be very surprised.

A Song For Everything

I Could Use A Love Song

Make Out With Me