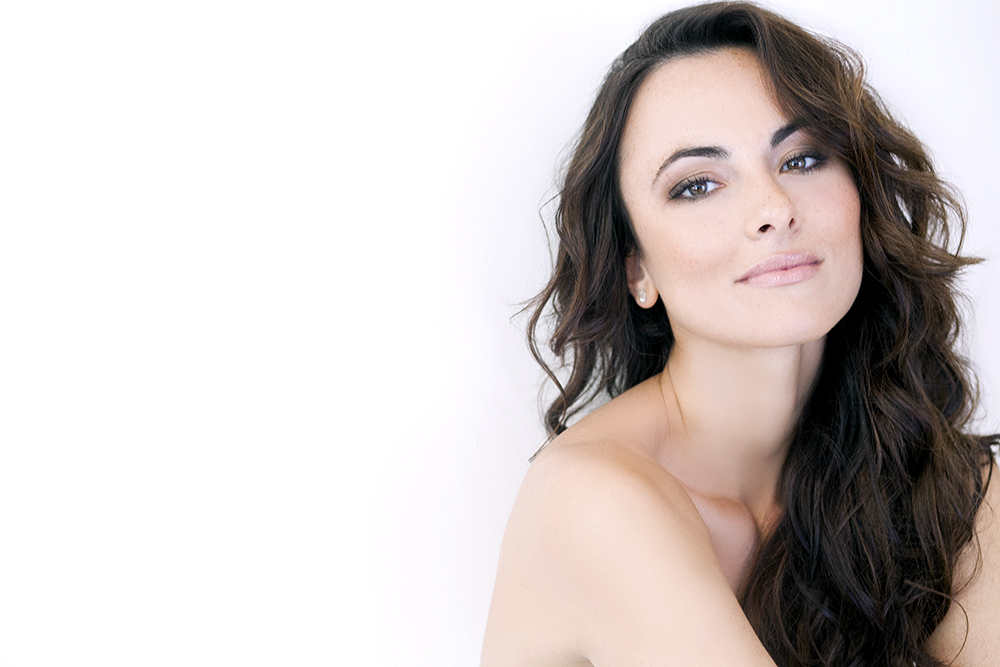 Isabel Leonard is a two time Grammy Award winning mezzo-soprano who has appeared all over the world from the Metropolitan Opera in New York to the Vienna State Opera in Austria.  And there she was Thursday evening, with our own Utah Symphony, on the stage of The Noorda Center for the Performing Arts in Orem, Utah. I don’t think we realize what an honor it is to have Isabel here in our state.  Not only did Ms. Leonard perform last night in Orem, but she will be performing at Abravanel Hall in Salt Lake City tonight (January 10) and tomorrow evening.

The lights dimmed and Executive Director of The Noorda, Alex Malone walked onto The Noorda stage to welcome us to the beautiful performing arts center.  He also informed us that Isabel Leonard was under the weather. I was immediately worried that we wouldn’t get to see her at all but my fears were quickly put to ease when Malone informed us that she would still be singing albeit in a condensed fashion.  I would imagine Leonard was disappointed to not be able to share all of the arias that she had planned on performing, but as we were later informed, she insisted on performing at least the arias she gave us. I’ve known other singers to cancel for less, so it was much appreciated that she still made sure to perform for us.

The concert began with the Overture from Mozart’s The Marriage of Figaro. The Utah Symphony was beautifully conducted by Bernard Labadie.  Labadie comes to us from Canada where he formed two ensembles, Les Violons du Roy and La Chapelle de Québecn which specialize in Baroque and Classical repertory which is what Labadie is known for.  Again, what an honor to have him on the campus of Utah Valley Univerisity conducting this great symphony orchestra with a world renowned mezzo-soprano featuring some of the great works of Mozart and Mendelssohn.

Isabel Leonard was welcomed to the stage with generous applause.  I understood that the reason we were informed that Ms. Leondard was not feeling well was to tell us that the show would be shorter. But I almost wish they hadn’t because when I heard that it put me on high alert!  I was nervous for her and curious to see if I could tell what was wrong with her. But being the true professional she is, Leonard showed no signs of illness.

She opened with “Non so più” also from The Marriage of Figaro. It was immediately clear why Isabel is so revered. The color of her voice soared through the hall and as I looked around I could see faces of everyone just totally entranced by her voice.  What was most impressive was how poised she was. If she had a cough or a sore throat I’m sure it was unnerving to be out there performing. But she was flawless. Both with “Non so più” and her next Mozart aria, “Voie che sapete”, a personal favorite of mine and I’m sure many others.  This may have been the highlight of the entire evening for me. The aesthetic of the orchestra, with all of the strings being plucked rather than played with bows and the smoothly delivered vocals expressing feelings ranging from vulnerability to curiosity, to confidence totally drew me in. Isabel returned later for her final aria of the evening, “Deh per questo istante” from La Clemenza di Tito, a piece Mozart composed while he was taking a break from composing The Magic Flute.

People have asked me over the years, why I like opera, or what is it I enjoy about opera singers.  I think to many is this old style of singing or a high society type fo music they don’t identify with. I think if people gave it more of a chance they’d see how truly amazing it really is. And as far as why I like opera singers, well, Isabel Leonard is a perfect example. You’re able to see the human body function as a musical instrument. Leonard was out there, with a huge orchestra behind her, with no microphone, no effects, just her instrument, her voice.  The next time you go watch an opera singer perform, and I highly recommend you have that experience, don’t just listen, watch. If you go to Abravanal hall tonight, look at Ms. Leonard’s neck and shoulders. They’re totally relaxed. Look at her jawline.  There’s no tension, even on the big notes. Then look at her torso. It’s like a machine. Watch how long she sings without taking a breath. Her ribcage is extended, air pumps through her diaphragm and into her lungs, therefore, allowing her to have full control over the dynamics of her voice and the phrasing of the piece.  Her chest only moves when quick breaths are necessary. Then look at her face, all the emotion is there. The instrument is doing its job and her face conveys the emotion of the aria. It’s an incredible thing to observe. Compare that with contemporary vocalists and you’ll see a major difference. The neck is tight, the entire body moves to get the big note out. Not that I’m bashing them or their style. It’s totally apples and oranges, isn’t it? But to see a voice as a true instrument like you’d consider a flute or viola, you need to see Isabel Leonard or someone of her caliber.  There’s nothing quite like it.

When Leonard departed the Utah Symphony concluded the evening with Mendelssohn’s “Italian” Symphony.  Conductor, Bernard Labadie shared with us that he liked doing Mozart and Mendelssohn together because their lives were similar in that they died so young yet produces so much music. These pieces were written towards the end of these men’s lives when they were composing music at a frantic pace.  He felt like Mendelssohn’s Symphony No. 4 in A Major or, “Italian” Symphony was his piece most like Mozart’s. I love looking around at the audience during performances and the moment the familiar melody of the first movement, “Allegro vivace” was heard, I could see smiles appear on audience member’s faces.  It was a look as if to say, “Oh I know this one? I like this piece!”.

The show ended with a standing ovation which I believe we intended not only for the amazing work by Labadie and the Utah Symphony but for Isabel Leonard as well.  I can’t imagine staying away from the opera or The Noorda for long. It was my first time seeing the young performing arts center, but judging by the talent they’ve had and have scheduled, I think I’ll be frequenting its halls quite often.

You have two more chances to see this amazing concert here in Utah.  Click here for tickets to see Isabel Leonard with the Utah Symphony at Abravanel Hall this weekend (January 10 & 11).