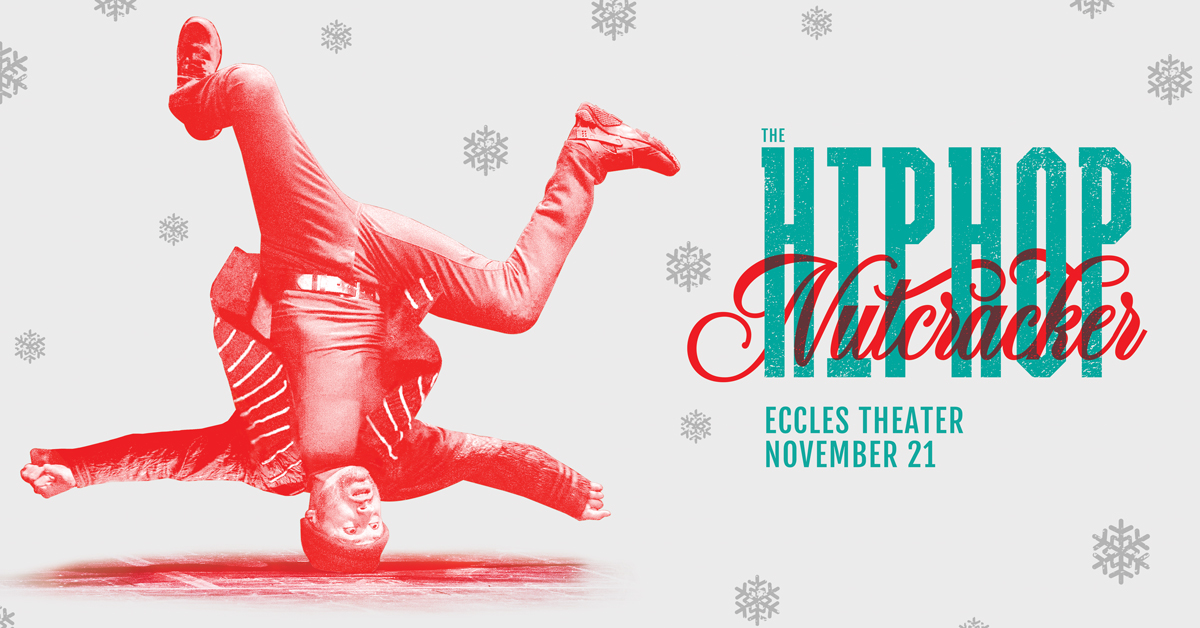 “The Hip Hop Nutcracker  is a contemporary dance spectacle set to Tchaikovsky’s timeless music. A unique and joyful event, this evening-length production is performed by a supercharged cast of a dozen all-star dancers, a DJ, a violinist, and MC Kurtis Blow, one of hip hop’s founding fathers, who opens the show with a short set.”

I was intrigued and excited to see what this show had in store. I love Tchaikovsky’s masterpiece so I was nervous that this would water down or ruin a ballet that I absolutely love. My daughter has taken dance classes for many years so I thought she would love to see a show like this. She agreed to become my review partner and off we were to the Eccles Theater in downtown Salt Lake City.

The city was buzzing because this was also the same evening a certain man with a white beard and red suit was going to be making his first appearance of the season across the street at City Creek. Children of all ages were hustling over to the downtown mall to get a glimpse.

The night began with our host for the evening, MC Kurtis Blow taking the stage. It was really cool to see one of the founding fathers of Hip Hop on that Eccles Stage. He’s most famous for his 1980 hit, “The Breaks” which was the first hip hop song to be certified gold and the first 12″ album to go gold in music history. He went through a short set of hip hop songs and then it was time to countdown New Year together. It was so fun!

I think one of the major highlights for me was seeing DJ Boo and violinist Jarvis L. Benson perform together. Benson would follow DJ Boo as he scratched his vinyl while Benson would masterfully play his violin. It was impressive, unique, and a stand out part of the show.

When I saw DJ Boo set up, I thought this entire show was going to be a DJ playing hip hop versions of The Nutcracker. Not so. DJ Boo only played during the breaks between scenes. The ensemble danced hip hop to Tchaikovsky’s original arrangements. And somehow, someway it worked! The majesty of the music and the elegance of the composition mashed up with the popping, locking and breaking elements hip hop dance is something I never thought I’d see or appreciate. This ensemble really surprised me and my daughter. I could see other families in the audience with mouths wide open as the dancers flew through the air, flipping and flying as if it was nothing.

As we left the beautiful Eccles Theater, I asked my daughter what she thought of the show. With a big grin on her face, she told me, “I loved it! It was so much fun.” It was a lot of fun. This show might not be for the truest of the true fans of Tchaikovsky’s Nutcracker. But if you love that music and that show, but are willing to enjoy a modern take, I think you would really enjoy the Hip Hop Nutcracker.