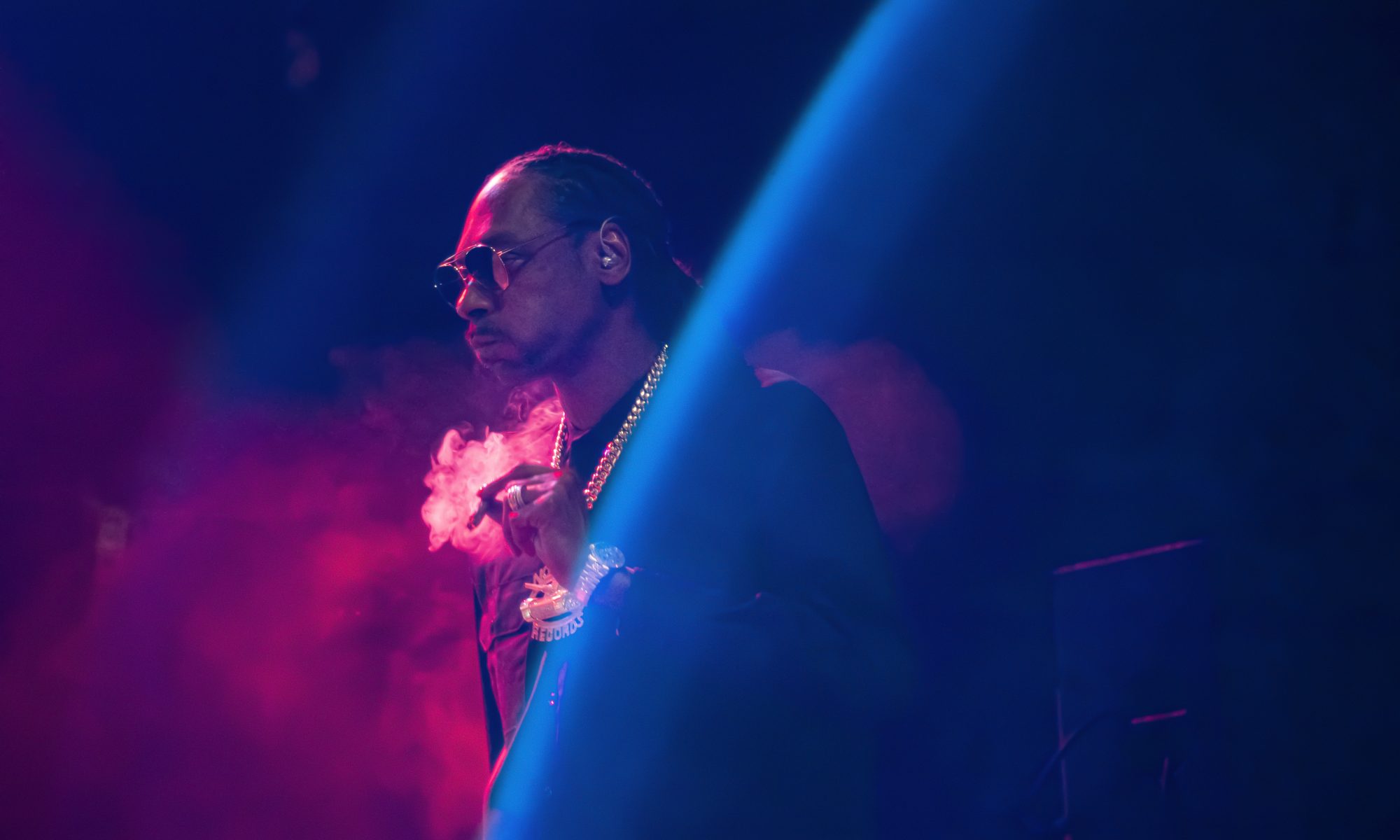 Dada dadada it’s the mofo D O double G, Snoop Dogg! Hip-hop heads were in for a treat at The Depot on Thursday evening. Rap royalty Snoop Dogg and Warren G stopped in Salt Lake City on Snoop’s I Wanna Thank Me Tour.  If you know anything about old school hip-hop you know that both these guys have had huge influences on helping rap music make its way into the mainstream and now it’s the most popular genre!

Most rap shows I attend have pretty young audiences with teens and young adults ranging from 15-25 years of age but this show was 21+ and since Snoop Dogg is old school, a much older crowd was in attendance. It was a pretty unique experience to see so many grown adults so excited to see an artist that so many have listened to for years!

Trae tha Truth spit some bars for a pretty short but impressive opening set. He had extremely smooth flow and intriguing lyrics. He was followed by artist RJ Mr. LA. RJ had amazing stage presence and his Jazzy R&B style mixed with impressive rapping and dance moves had all the attention of all the ladies in the room.

Warren G was next up. The triple platinum artist formerly part of 213 (a rap trio consisting of him, Snoop Dogg, and the late legend Nate Dogg) was welcomed by the loudest I’ve ever heard a crowd go for an act that wasn’t the headliner! Although Warren is now older and no longer in his prime, he didn’t lose a drop of his swagger.

As the 49-year-old performed songs from his impressive discography, I could see many people in the crowd being brought back to their younger years. Everyone knew every word. After taking photos fro the first few songs I watched the remainder of his set from the side of the stage by the security. Normally security guards at most of the concerts I attend focus solely on their jobs and often times don’t even know the artist performing, but I noticed a few on the security team jamming out and rapping along all with smiles on their faces. Although I might have been a little young to listen to Warren G growing up, I could still feel the nostalgia in the room as smiles were seen from front to back! He performed classics such as “I Need a Light” and “Regulate” with a tribute to Nate Dogg. It was old school hip hop at its finest.

The production didn’t change much for Snoops set, the only additions were some red and blue bandanas being hung from the Dj booth and two strip poles being brought out. The lights dimmed and Snoop came out in perfect Snoop fashion, smoking a joint, sunglasses on, and followed by his crew as well as two beautiful dancers. Snoop is the perfect embodiment of what you think of when you think of 90s hip hop. He carried the same pimp like attitude that you know he has from his younger days before becoming famous.

It was surreal to see one of the most recognized rappers of all time performing his classics. During “The Next Episode” there’s the famous line “smoke weed every day” and when snoop sang that a huge cloud of smoke came from the crowd. It was pretty much exactly how you would picture a Snoop concert.

Snoop continued through his set crip walking to “Drop it Like it’s Hot” and “Still Dre”. His dancers would pole dance on some songs like Snoop’s song with Akon “I Wanna Love You” and on other songs, he would have his whole crew come out to sing and rap background vocals. As I watched the show from the back of the room I looked around and saw just an absolute party! The stage was much lower than most concertsI’ve seen, so Uncle Snoop felt like he was right there with the crowd! He never stopped smiling the whole time. He looked like he was having just as much fun as the crowd!

Snoop Dogg has been featured on so many hits over his long career and so every song he performed was a well-known tune! Most of the people in the crowd rapped every word on every song! The Doggfather invited his cousin, Warren G to come back out and they rapped a couple of songs together (along with the Snoop Dogg mascot). During “Gin and Juice” Snoop pulled out a money gun and shot cash into the crowd! Snoop ended the show with “Young, Wild, and Free” from his Comedy movie with Wiz Khalifa Mac and Devin go to High School. It perfectly summed up the night with its message to live carelessly and free! Thank you Uncle Snoop for years and years of contributions to the hip-hop community.