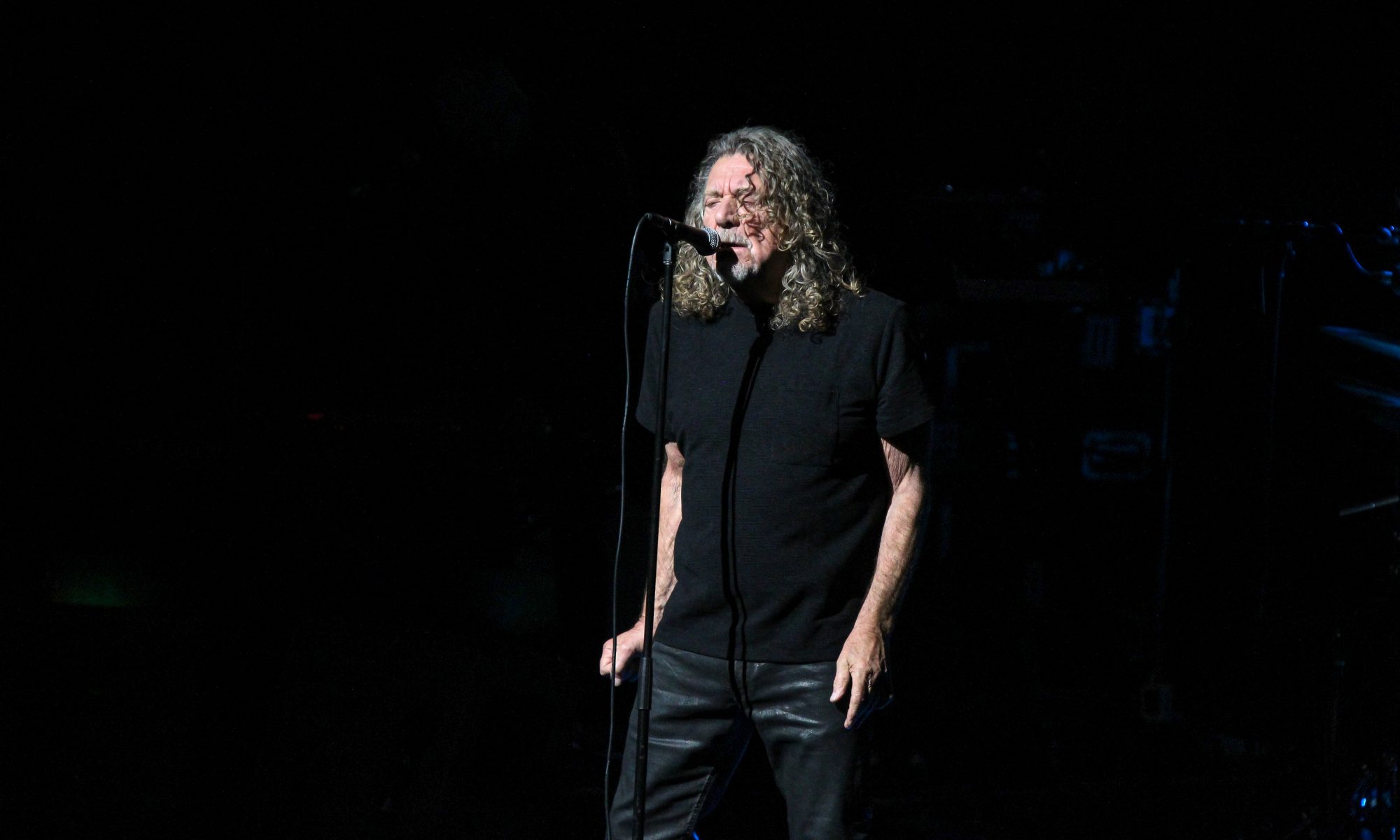 Robert Plant.  When you just read that name, how many things came to mind? Led Zeppelin, of course.  How about, legend, rock star, songwriter, singer, amazing singer, legendary rock star singer of Led Zeppelin?! In just writing his name, so many thoughts instantly come to fly through my brain.  You can’t see his name without instantly hearing his voice. Just in the short time you’ve been reading this, how many Zeppelin songs have run through your mind? Now imagine getting to see this man in concert and getting to hear that voice in person.  Right? Crazy! Then imagine trying to write down the experience to share with everyone. Not so easy, is it? I gotta be honest with you fine readers, this review was one of the hardest for me to write. Robert Plant is just so massively huge in Rock music lore.  How do my words do this show justice? I’m not sure if they will, but you’ll definitely get a sense of just how epic the evening was. It was one I won’t soon forget.

The night began meekly with Americana singer, Lillie Mae.  I walked into the Delta Performance Hall of the Eccles Theater and Lillie had just taken the stage.  I noticed a respectful and silent audience as she performed. Lillie Mae shifted between guitar and fiddle with her lone stage companion, guitarist,  Misael Arriaga Arriaga. I thought her voice was beautiful. It was so clear yet resonated powerfully throughout the theater. The audience loved her. In fact, one audience member loved her so much he had to shout out, “I love you!”. I thought it was hilarious when Arriaga responded for Mae with, “Prove it!”.

Between Lillie’s and Robert Plant’s performance, I spoke with an usher who had shown me where I would be taking photos for the night.  I asked him if this was a show he was excited about. “Oh, yeah!”, the man said. He had never seen Led Zeppelin or Plant before and was excited to be working at this show.  Just then a man in the row in front of us and got up wearing a worn-out Robert Plant shirt and told us we were in for an amazing evening. He shared with us all the times and places he had seen Plant perform.  Needless to say, anticipation and excitement were high. The only concern I had was when the usher told me that he was informed the setlist was only 12 songs. Now, I had always been told that Robert Plant will do some, but not a lot of Led Zeppelin songs in his set, so I was prepared for that part, but 12 songs seemed short.  But I told myself not to worry, that I would take whatever I could get. I didn’t think I’d ever get the opportunity to see Robert Plant in concert, let alone review the show. So I was good regardless of the length of the show.

The lights went out, and the audience jumped to their feet and roared with excitement.  It was here! The moment was finally here! Before Robert Plant took the stage, however, he played a video of the now infamous UN speech from young Climate Activist Greta Thunberg.  I have to admit I kind of chuckled when this video came on. Not because of Greta, or her message. But at what a brilliant strategy this was. Captive audience waiting for you to take the stage?  Well, play a video of something you’re passionate about. They’ll definitely watch. I thought it was a great way to share a message about something that is clearly important to Robert.

The band and Robert Plant took the stage.  At first Plant’s back was to the audience, but as the music began he turned and faced the crowd and the place went nuts.  This doesn’t happen to me often, but when it does I really feel it. I looked at the stage and thought, “It’s him. It’s really him”.  I just couldn’t believe I was in this beautiful sold out theater seeing the lead singer of what many would argue is the greatest rock band of all time. He started things off with a cover of the  Memphis Minnie & Kansas Joe McCoy song, “When the Levee Breaks”. Ok, be honest, who even knew that was a cover? Not me! So in my mind, I thought, “Woah! A Zeppelin song straight out of the gate!”  Eccles Theater was moving! People were so happy to be hearing this song and it was clear from Plant’s face that he was happy to be on that stage.

The next thing that struck me was Plant’s voice.  I thought he sounded amazing. Not for a 71 year old man, just amazing period. Yes, his voice is seasoned, yes his voice is lower, yes doesn’t sound exactly like he did in the 70s, but he definitely sounded like Robert Plant.  I was actually really impressed with his range. I think a lot of people assume he doesn’t reunite with Led Zeppelin because his voice has lowered over the years. I think he’s just not interested in that kind of reunion.  He has so many other musical interests and I think he’d like to leave that part of his career where it is. But when he sang “Black Dog” I don’t think anyone thought twice about how great he sounded. There’s a weight and color to his voice that no one else will ever have.  You know who’s singing when you hear his voice. The audience sang along to one of the biggest Zepplin songs out there and as I sang while taking photos I could see the joy in the faces in the crowd. Following “Black Dog” Robert said to the audience with that wry look on his face, “There’s another song from Greta Van Fleet.”

I was so impressed with Plant’s band, The Sensational Space Shifters.  What an eclectic group of talented musicians. The show consisted of varying styles of music from Americana, to Blues to Hard Rock, and they played every style brilliantly.  The two standouts for me were guitarists, Justin Adams and Liam “Skin” Tyson. Their jaw dropping solos impressed the thousands in attendance. Robert Plant himself, who sees these guys perform every night still seemed to be impressed and in admiration of their talents.  There were times where he would just sit back and watch them go. Justin Adams played great all night, but in a totally unassuming way. Then all of a sudden he broke out of his shell and just started shredding and hamming it up for the audience. He was incredible. And I have to give them both credit for standing in for Jimmy Page on the Zeppelin songs.  Those are big shoes to fill and they did an exceptional job. It was good to see Lillie Mae join The Sensational Space Shifters on stage from time to time on the songs with more country roots.

When all was said and done, twelve songs turned out to be just the right amount for the over 90 minute show.  Don’t get me wrong, everyone would have been totally fine with Plant and the crew going another 90. But I would think everyone left satisfied with this show. Ultimately, there were seven Led Zeppelin songs in the set.  Some of the songs like “The Rain Song” “Gallows Pole” or “Babe I’m Gonna Leave You” were unexpected surprises. I thought they mixed in perfectly with songs from Plant’s acclaimed solo career. Songs like “In the Mood” or a newer release “New World…” were welcome and enjoyed inclusions to the set.  Robert has insisted that he’s not interested in doing a greatest hits retread of old songs. I think he’s done a great job of still doing songs people want to hear, in particular, the Zeppelin hits, while giving them a creative and vibrant spin. Many of the songs are more rooted in an Americana sound than their former British hard rock style, but they were enjoyed all the same by this audience.

The night ended with the crowd roaring as loud if not louder than they had all night.  I have to admit I was pretty excited to hear “Ramble On”. It was fun to watch Robert smile at how excited everyone was.  He really did seem to be enjoying himself the entire evening. We most certainly did. People were moving and dancing and singing and carrying on with their friends as if they wanted to make sure to get out any remaining energy they had.  When I heard the lyrics “ But now it’s time for me to go, The Autumn moon lights my way” I thought it was as appropriate a show closer as you could get. Robert and the band bowed and waved as they left the stage to thunderous applause. The crowd was buzzing all the way into the streets.  I heard people talking about how long they’d been waiting for this night. I heard a couple of young guys at the crosswalk trying to make sense of what they had just seen. “I can’t really wrap my head around what just happened.” One guy said. The other followed with, “I think we need to come to terms with the fact that we just saw a legend.”  They looked at each other content with that sentiment. We really did see a legend. He keeps a low profile these days, so I think sometimes we forget just how major Robert Plant is in the history of Rock music. I don’t think I’ve been happier to check someone off of my “Must See Live” list.