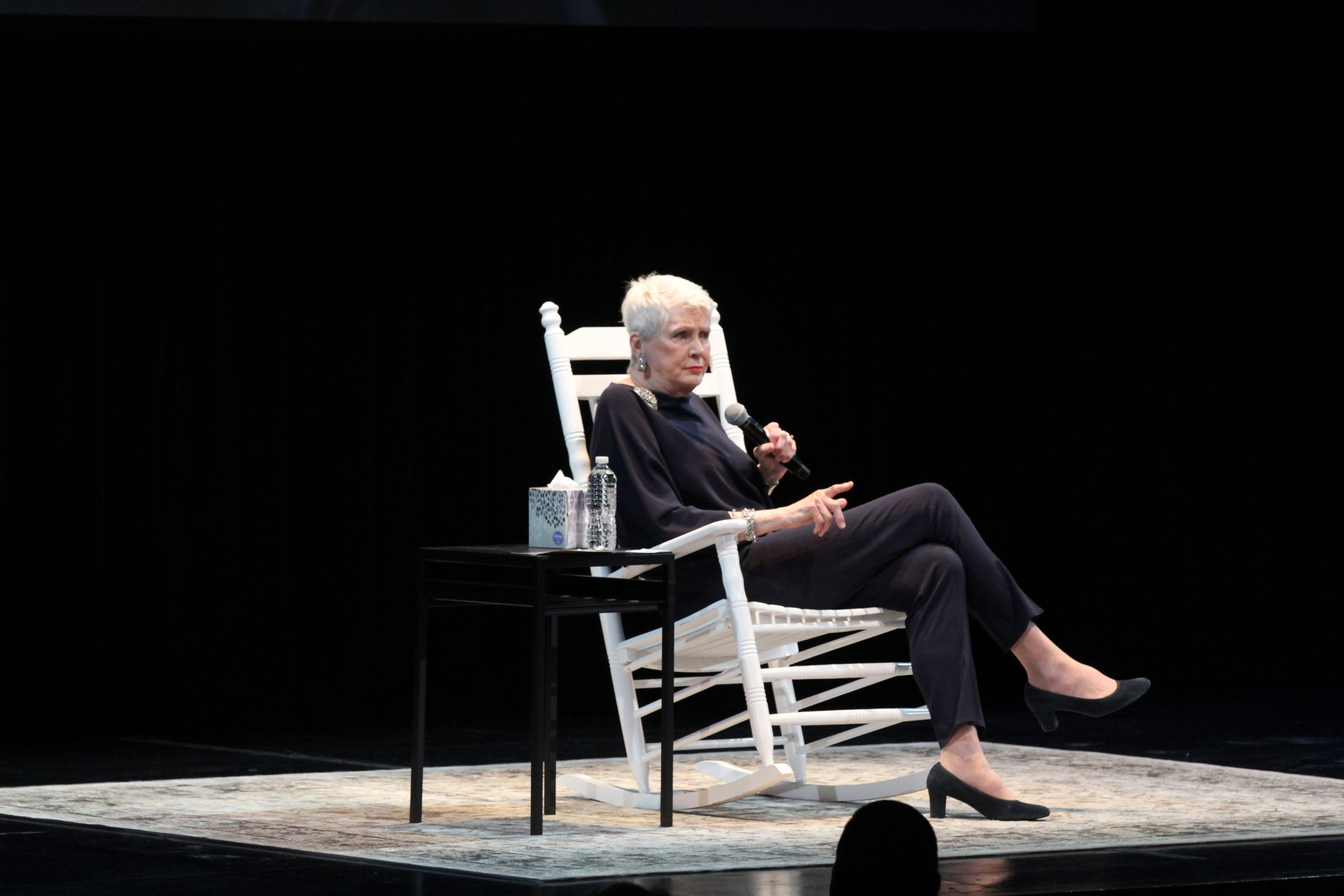 Finding humor in the every day is easier said than done, but Miss North Carolina 1963 (better known as Jeanne Robertson) makes it look like a breeze. This isn’t a product simply of age experience, it’s the result of a finely-tuned analytical perspective sharpened by wit and just the right amount of wackiness—specifically, the type of wacky that decorated the lobby of the Eccles Theater with signs encouraging the night’s attendees to enter a drawing to win a “JEANNE ROBERTSON SIGNED AND SAT-ON ROCKING CHAIR.”

Sure enough, the stage in the theater was adorned simply with a large white carpet and a single white rocking chair (the prize). After a short warm-up from musician Al McCree, who encouraged the crowd to sing along with lyrics such as butter beans and collard greens, Jeanne took the stage to thunderous applause. She greeted the packed room with a southern drawl and began to ask the audience where they may have seen her before. If it wasn’t the 1964 Miss America pageant, maybe people recognized her from the 12-million-hits-and-counting YouTube video, or had heard her voice on Sirius XM Radio’s Channel 98 (Family Comedy Radio, not to be confused with Channel 99, Raw Dog Comedy).

At 76 years old, she definitely attracted a crowd that found a camaraderie in her comedy, the same audiences that may have grown up with the likes of Johnny Carson and Carol Burnett. At one point, she made a reference to The Andy Griffith Show and apologized: “Sorry to you younger people in the audience. You probably walked in here thinking you’d stumbled into an AARP meeting!”

Robertson’s stories revolved around this kind of self-deprecating humor. Robertson took a seat in her rocking chair and recounted a fall that left her in the hospital for three months after incurring a broken femur. “This will be the second hardest thing I do all night,” she told the audience. “The first hardest will be getting up.” Robertson’s delivery of such lines was spot on, often building the suspense with pauses that she would tease was simply the consequence of old age.

Robertson is actually a member of the National Speakers Association, a group founded in 1973 that is made up of speaking professionals certified in training, educating, humoring, and motivating—among other talents. Though Jeanne now tours as a humorist, her professionalism shone through in her storytelling, which touched on the growing pains of a teenager taller than all of the boys in her class, the trials of having a husband who should never be sent to a grocery store alone with even a simple shopping list, and the rise of the TLC television programming. While some comedians find success in seeking out a punchline, Robertson has perfected the art of vivid imagery to reel in the audience with laughter and leave them with a message that also encourages them to think. “All I do is go around the country talking to people and listening to their stories, and then I go around the country and tell those same people those same stories.”

After entertaining the crowd for two full hours, it had become clear to those who weren’t already Jeanne’s fans that to recognize the sometimes sheer absurdity of the normalcy of our every day takes a special sort of person. Whether in doctors’ waiting rooms, while interior decorating, during times of loss or dates at the local fast food joint, finding humor in the every day is a skill that only talent, patience, and maybe a dash of some “Grandma Gone Viral” charisma can create.