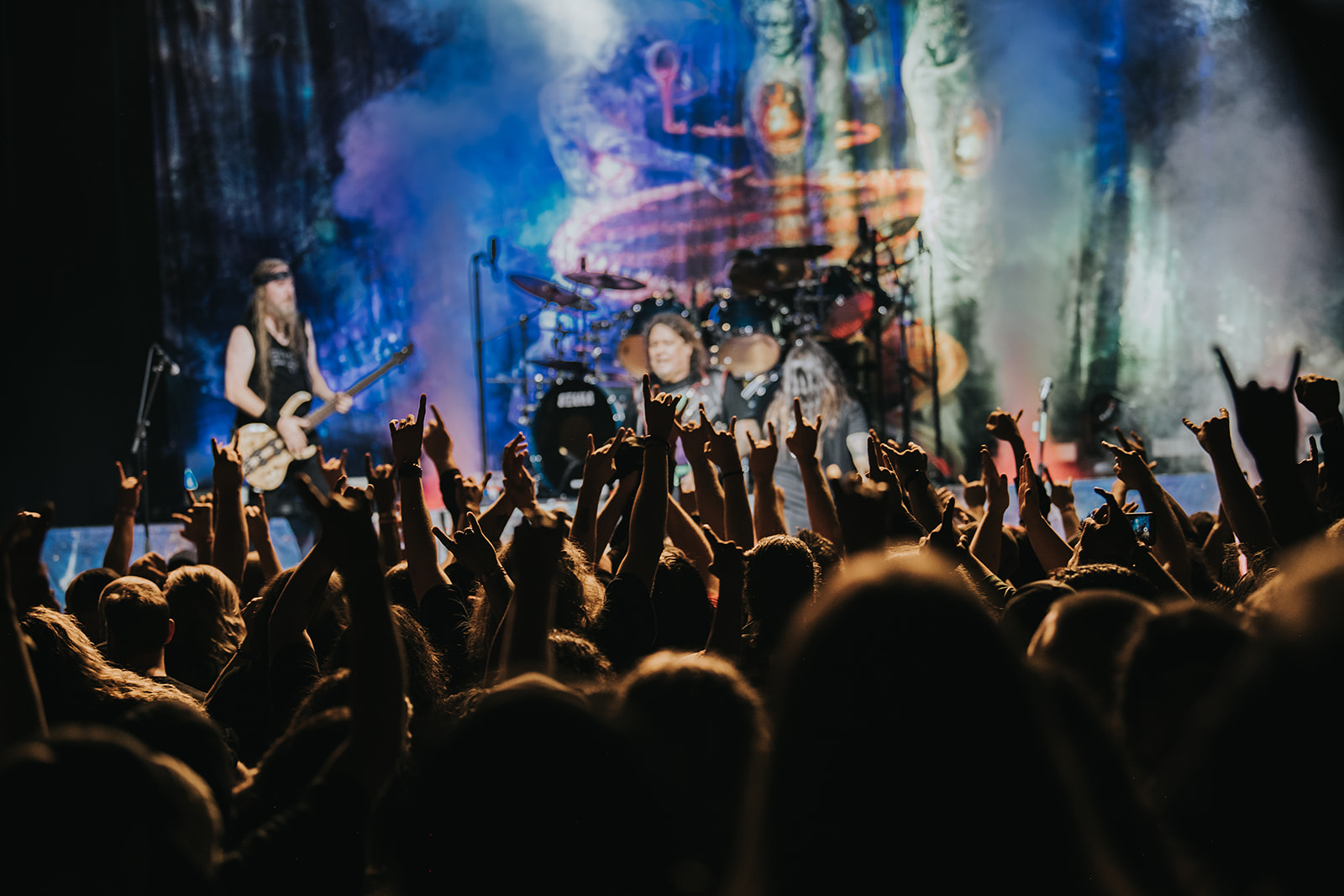 Near the front of the line, I heard a guy telling his friend that Testament was the first concert he ever went to way back in 1985. I knew that if a band could keep fans coming back for almost 40 years they must know how to put on a good show. Inside the venue, I found multiple lines at the merch table almost as long as the outsides of the lines. With tons of options, the table stayed consistently busy the entire night.

Death Angel opened the night to an eager crowd ready to be entertained. They did not disappoint as they started into their high-energy setlist. I immediately picked up on how much the crowd loved Death Angel. They were receiving more support than I usually see with opening bands. The audience was fully invested in their entire 50-minute set. They played both new and old songs including “The Ultra-Violence,” “Evil Priest,” “The Moth,” “Humanicide,” and “Thrown To The Wolves”.

Lead singer Mark Osegueda took a moment to address the crowd. He shared his appreciation for Salt Lake’s devoted heavy metal fans.  “We are about 5 and a half weeks into this tour. And you would be surprised how many places I have to remind that they are at a thrash metal show. So many places can learn so much from you Salt Lake City”. He talked about the band’s history with Utah which stretched back to the 80s and the local venue Speedway Cafe which closed its doors over 30 years ago.

At the end of their set, they threw guitar picks and drumsticks out into the audience. Death Angel walked off while the crowd continued to cheer and chant their name. The band has been around since 1982 and consists of Rob Cavestany (lead guitar, backing vocals), Mark Osegueda (lead vocals), Ted Aguilar (rhythm guitar, backing vocals), Will Carroll (drums), and Damien Sisson (bass).

Exodus came on next and kept the high energy of the night going strong. They started their 11-song set with “The Beatings Will Continue” from their most recent album Persona Non Grata. Lead singer Steve “Zetro” Souza also took the opportunity to express his love for the Salt Lake crowd. “It’s great to be back to this amazing heavy metal city. You guys have always supported Exodus!” He then introduced drummer Tom Hunting, who was diagnosed with cancer in 2021. Hunting received the most passionate cheers of the night. He told his fans, “I want to thank you so much for helping me on my journey, I hope you’re all doing f*¢king killer on your own journey. f*¢king life is amazing, live it with gusto mother f*¢kers!”

I watched from the balcony above as the band directed the crowd to divide down the middle to create a “wall of death” for moshing. They reminded everyone that this is supposed to be fun and everyone needed to look out for one another. If someone falls, everyone around should immediately stop and help before continuing. It was nice to see how quickly people stopped and offered assistance anytime someone went down. Exodus finished their hour-long set with “Bonded by Blood,” “The Toxic Waltz,” and “Strike of the Beast”. Exodus was originally formed in 1979. The band currently consists of Tom Hunting (drums), Steve “Zetro” Souza (lead vocals), Jack Gibson (bass, backing vocals), and Lee Altus (guitars).

During the downtime between bands, the house speakers started playing “Bad, Bad Leroy Brown” by Jim Croce. It was strangely beautiful to watch that heavy metal crowd all sing the chorus together.

At 9:30 it was finally time for headliner Testament to entertain the crowd with their own version of exhilarating thrash metal music. They started with “Children of the Next Level” from their 2020 album Titans of Creation. The crowd was going wild as they threw out guitar picks to the audience. Between snapping shots I was able to grab a few of the picks that had fallen into the pit. I handed them to the front row fans. There was also a lot of excitement about drummer Dave Lombardo, who rejoined the band just earlier this year. Chuck Billy thanked everyone for being there to support the tour. He said they have been coming out to Salt Lake for over 35 years.

They continued with their impressive 14-song set, including “Practice What You Preach” “Night of the Witch” and “Legions of the Dead”. Throughout the night I watched as fans would crowd surf. Security guards in the pit would grab them and hold them up close enough to reach the band. Chuck Billy noticed their hard work as well. “I’d just like to thank the security up here for doing a hell of a job catching you guys. That’s the way I love to see it. But I’ll apologize now for this next song.” The crowd knew something I didn’t, and they started shouting out the name of the next song “Over The Wall”.

They finished off their hour and a half set with “Into The Pit” and “Disciples of the Watch” before taking a bow and leaving their fans completely blown away by their incredible show. Testament was formed in 1982 and its current members are Eric Peterson (lead and rhythm guitar, backing vocals), Chuck Billy (lead vocals), Alex Skolnick (lead guitar, backing vocals), Steve Di Giorgio (bass), and Dave Lombardo (drums). They will be taking The Bay Strikes Back tour to Europe for the summer and will return in September for the second half of their tour in North America.

At the end of the night, I was just so happy to have had the opportunity to witness each one of these very talented musicians doing what they love. I will look forward to the next time any one of these three bands returns to Salt Lake City.