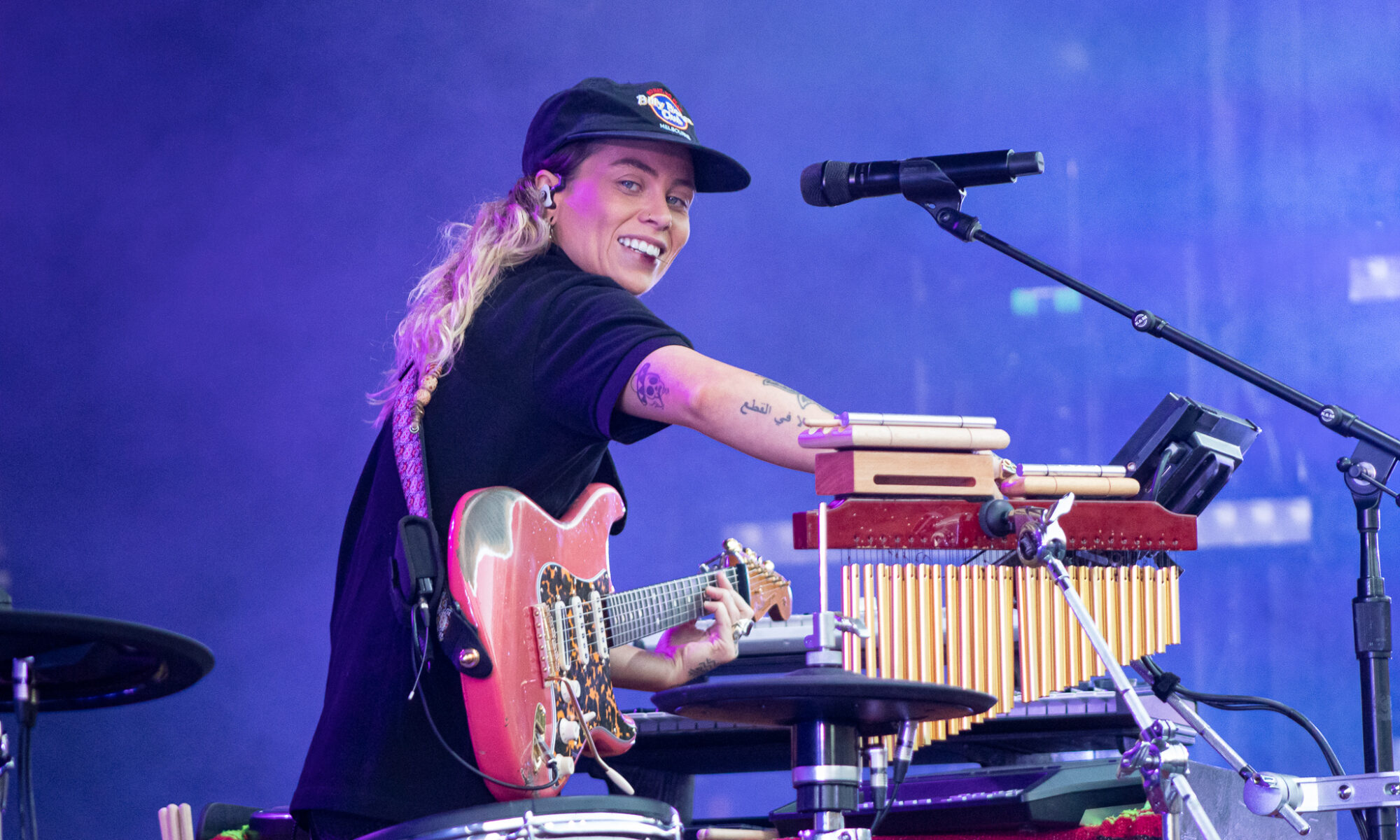 Seeing Tash Sultana live is more than just a concert. It’s an all-encompassing experience. Sultana is the only one on stage. But you would never know it by the layers upon layers of music that are coming out of the speakers and into the stands. There was a vibrant energy throughout the audience and it was clear that the people there were expecting a fun night. The line for merch was lengthy but shortened just in time for Tash Sultana to take the stage. I like the way Sandy Amphitheater set up the merch booth. The line forms on the hill so people can actually watch the show from a distance as they wait to buy a shirt.

This time of year is so strange as far as weather is concerned. One night you’re breaking out a warm coat and huddling up trying to keep warm. The next you’re busting out the tank top or sleeveless shirt and shorts because of how hot it is. It was a hot day when Tash Sultana came to town. It felt like an appropriate temperature for this kind of show. It was a sellout show and for the most part the outdoor venue is shaded. This helped a lot. But with Australian multi-instrumentalist, Tash Sultana hitting the stage, temperatures were about to stay hot.

The audience rose to their feet the moment Tash Sultana appeared on stage. Tash moved from instrument to instrument, looping sounds to fill the sunset-backed amphitheater. The audience was mesmerized as they watched in awe of how each loop was joined by the next and how each new sound filled a purpose to the greatness of the song. I was impressed being right up against the stage as I could sense the dedication to get the loops perfect. Looping takes precision and is not as easy as it looks. And it doesn’t look easy! Before too long, all the sounds were looped and Tash moved around the stage to a worked-up crowd.

Tash Sultana didn’t say much. They let the music do the talking. And the music said a lot. The music seems to be a fusion of Jazz, World, Dance, Rock, and Reggae. I don’t think it’s a style that fits into one genre. One thing I do know is people were feeling it. I would look around and people would have their eyes closed, just taking in the music. Other times they were rocking out or dancing the night away! It was such a good mix of stylization that people could get their fill of anything they were looking for.

The amazing thing is I haven’t even gotten to Sultana’s voice. Exceptional guitarist? Yes! Outstanding percussionist? Definitely, Electronic wizard? No doubt! Skilled Trumpet player? Is there any doubt? Yes! Amazing vocalist too? A resounding yes! I mean if Tash Sultana couldn’t do any of these other things, and were only a singer in a band, we would still be talking about how amazing their vocals are. There isn’t a weak link in the arsenal.

Speaking of vocals. Tash told us that it was a miracle that this show was even happening. For multiple reasons, but one was that they had no voice. Sultana shared that meditating about balance helped the voice to come back. Half of the crew was still in Austrailia. They were sick and unable to travel. I have to say it really was a true miracle because there was no evidence that there was anything wrong with Sultana’s voice. It seemed as if they had full range and power. I mean, if that’s their voice while under the weather, I can’t imagine what it’s like at full strength.

A couple highlights for me were when Tash ran though the crowd. The audience was so excited. People didn’t know what to do. Do they try to get a video of Sultana zipping by them, do they just watch one of their favorite artists singing right next to them, do they try to get closer? People legitimately didn’t know what to do. it was a really cool thing to watch and very surprising to see.

After all the looping, the rocking, and the dancing, one of the most powerful moments was during the encore. Tash came out on stage and simply sat and played the guitar and sang for everyone at Sandy Amphitheater. Such versatility. So much talent.