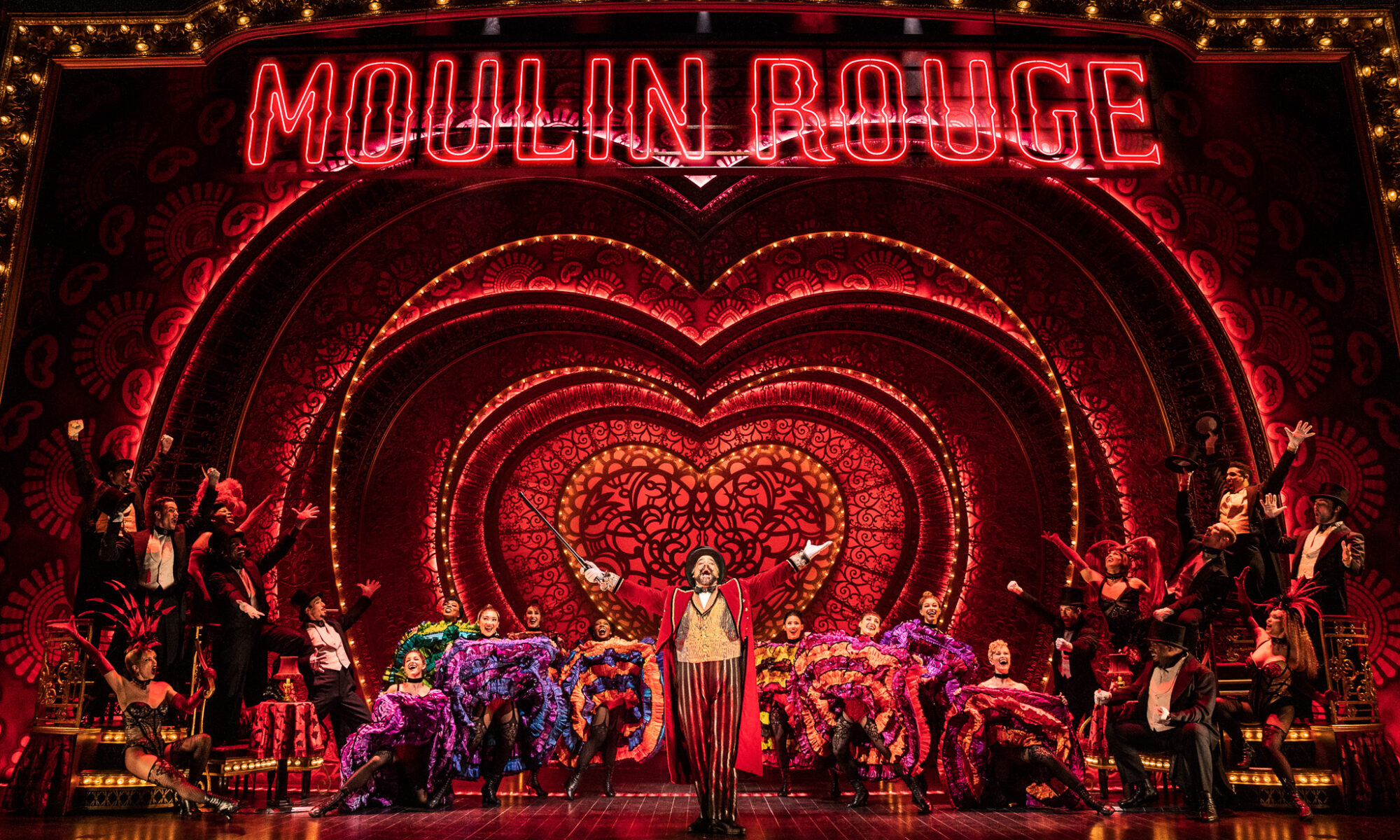 Some shows are more difficult than others to keep this policy of mine.  By the way, does anyone else do this?  Am I weird for waiting?  Or is this common? Anyway, Hamilton was impossible.  I wasn’t getting into Hamilton for a long time.  So I definitely listened to that cast recording.  I listened to it over and over and over.  Not to compare Moulin Rouge! The Musical to Hamilton, but I will be listening to this cast recording a lot!

This review contains mild spoilers. You have been warned!!!

It was so fun to get to see this not only at the gorgeous Eccles Theater but on a Friday night.  Generally, we’re invited to review the opening night of a production when it comes to town.  But Moulin Rouge invited press to the Friday night performance.  I can’t say that I’ve ever been disappointed by a midweek performance, but there is something special about a show on a weekend night.  Even if it’s simply from my own state of mind.  I was excited to walk in and see people dress up for a night out.  Some had already loaded up on Moulin Rouge! The Musical merch.  Others grabbed a quick drink before showtime.

By the time the lights began to dim, people were already in their seats ready to go! Many performers were posing and moving on stage.  Setting the tone for a sultry, risque night at the Moulin Rouge.

When a movie is made from a book, or a movie comes from the stage, people, including myself, will compare.  It’s the same with a musical that was originally a film.  In fact, outside of Disney Productions, there aren’t a lot of movies that have done well when they’re brought to the stage.  Some have been great.  Hairspray, The Color Purple, and Sunset Boulevard to name just a few. But it’s really difficult.  Then you have a movie as beloved as Moulin Rouge!  It seems like it would transition to the stage seamlessly.  But that doesn’t mean it will.  So I was very curious to see how they handled this production.  I mean winning 10 Tony Awards out of 14 nominations was a pretty good indicator that they were successful.  But I needed to see it with my own eyes!

The show begins somewhat subtly with four individuals snapping their fingers and moving downstage singing the beginning of “Lady Marmalade”.  My first thought was, “perfect”.  If you remember, this song was part of the soundtrack in the 2001 film but not in the actual movie.  I loved that not only did they incorporate it into the musical, but it was the first song. That was about it for subtlety as the song and show ramped up and transitioned into about three or so other songs in the first mashup of the night.  The entire show was filled with brilliantly arranged and placed mashups.

Things don’t slow down after the first number.  After the first round of thunderous applause, we’re introduced to Christian.  An American songwriter who has moved to Paris hoping to make his dreams come true.  Christian is played by Conor Ryan.  You either immediately fall in love with him or at minimum, you’re totally rooting for him.  He is so engaging and optimistic that you are brought into his story immediately.  The show creatively makes Christian the narrator of this story.  So now we’re not only rooting for him, but we have a personal relationship with him.

We’re the ones he’s telling this story directly to.  The production balances the narration well so that we’re not stopping the show too often.  Just at the right moments leading up to or following big moments. Ryan was perfectly cast in this role. His voice is excellent.  He’s able to belt and hit all the big notes while at the same time heart-wrenchingly emotional as well.  I wouldn’t be surprised to see him performing the role on Broadway.

We meet just about everyone before we’re properly introduced to Satine, the “Diamond” of the Moulin Rouge and love interest of well, everyone.  But most particularly, Christian.  Satine is played by Courtney Reed.  Another perfect casting.  To save time, I’m just going to tell you that the entire show could not have been cast better.  Every actor is suited for the role they’ve been cast in.  I really couldn’t see anyone else playing these parts.

Courtney Reed does a masterful job as Satine.  She also makes us fall deeply in love with Satine while also hoping for her to finally find true love after all the horrible things she’s been through in her life.  Satine is worldly-wise but graceful, and elegant, and has just enough hope to keep us hoping for her.  Anytime Reed is on stage the spotlight is hers.

There’s a moment in the show where Satine is on stage alone.  She begins to sing “Firework”.  The song made famous by Katy Perry.  At that moment I thought, this could be amazing or really dumb.  I quickly thought of a time when a song was placed in a dramatic moment and it didn’t go so well.  Does anyone remember the Broadway Musical, Dance of the Vampires?  No?  It was a massive flop.  It was Michael Crawford of Phantom of the Opera fame’s return to Broadway.  The show completely bombed.

I’m sure part of the reason was there was a moment in the show where Broadway great, Mandy Gonzalez sings, “Total Eclipse of the Heart”.  Yes, that “Total Eclipse of the Heart”.  The audience begins laughing at the ridiculousness of that song being in a musical.  Particularly in a dramatic scene.  I give credit to Gonzalez because she powered through and owned the scene finishing the song with a loud ovation. I felt bad for her because it was not a great moment in theater history.

Now, “Firework” is not “Total Eclipse of the Heart”.  But if not performed correctly, it has the potential to not work.  I give credit to the production, the staging, and ultimately to Courtney Reed for making the song heartfelt and empowering.  Sometimes there’s a very fine line between ridiculous and amazing. This moment was definitely on the side of amazing. It ended up being one of my favorite moments in the show.

Following “Firework”, there was a brief pause in the show due to a technical difficulty. To be honest I embraced the break. I felt like I needed a moment to catch my breath! The show was going a hundred miles an hour and I wanted to capture it all. It was all so stunning.

It’s funny.  Throughout the show, I thought about how amazing the lighting was.  Then I thought, “These costumes are so cool.”.  I couldn’t help but notice how amazing the choreography was.  As soon as the show was finished, I looked up the show to find that they won the Tony for all of these categories.  This information came as no surprise.  The lights and dancing told their own stories.  The costumes let the audience know everything we needed to know about a character before they ever spoke or sang.

I wish I could go down the cast list, but this review is already too long.  But I can’t wrap this up without mentioning just how great Austin Durant was as Zidler.  What a great team André Ward and Gabe Martinez were as Toulouse- Lautrec and Santiago were.  They all meshed so well together and yet when they had their own moments in the show they shined.

Clearly my review of Moulin Rouge! The Musical isn’t as objective as I thought it would be going into the show.  But I came out of Eccles Theater thrilled about what I had just seen.  Movie purists may not love it.  It differentiates from the movie at times, but it makes sense for the purposes of a live show.  Not all of the music from the movie is in the stage version.  My guess is they couldn’t get the rights to all of the songs.  I thought they did a great job of implementing new songs into the show where other songs might have been.

Speaking of new songs, at the end of act one is the Love Melody.  It’s a huge part in the movie where they sing songs with the word love or pertaining to love.  That movie had music from lets say, the 60s to 2001 to use.  This musical had twenty more years of love songs to choose from. I don’t know how they arranged all the songs.  It’s mind blowing how Reed and Ryan remember every lyric and melody.  The songs come at a rapid fire pace.  It’s impressive.  It’s beyond impressive.  The number is so climactic and full of love and life that I could feel the energy in the room rising.

The very second the lights cut to end Act I, the crowd roared as if it was the end of the show.  Imagine that great scene from the movie but in person.  It was all that and more.

If you like Jukebox Musicas, love, comedy, and drama, I think you’ll like Moulin Rouge! The Musical.  It’s a powerful show filling up all the senses.  I know I’ve been effusive about my love of this production.  I hope you don’t mind, I hope you don’t mind.  That I put down in words.  How wonderful this show is… ok come on.  I had to do it! Go see Moulin Rouge while it’s here at the Eccles.

Moulin Rouge! The Musical will be playing at the Eccles Theater until December 11.  For tickets click here.