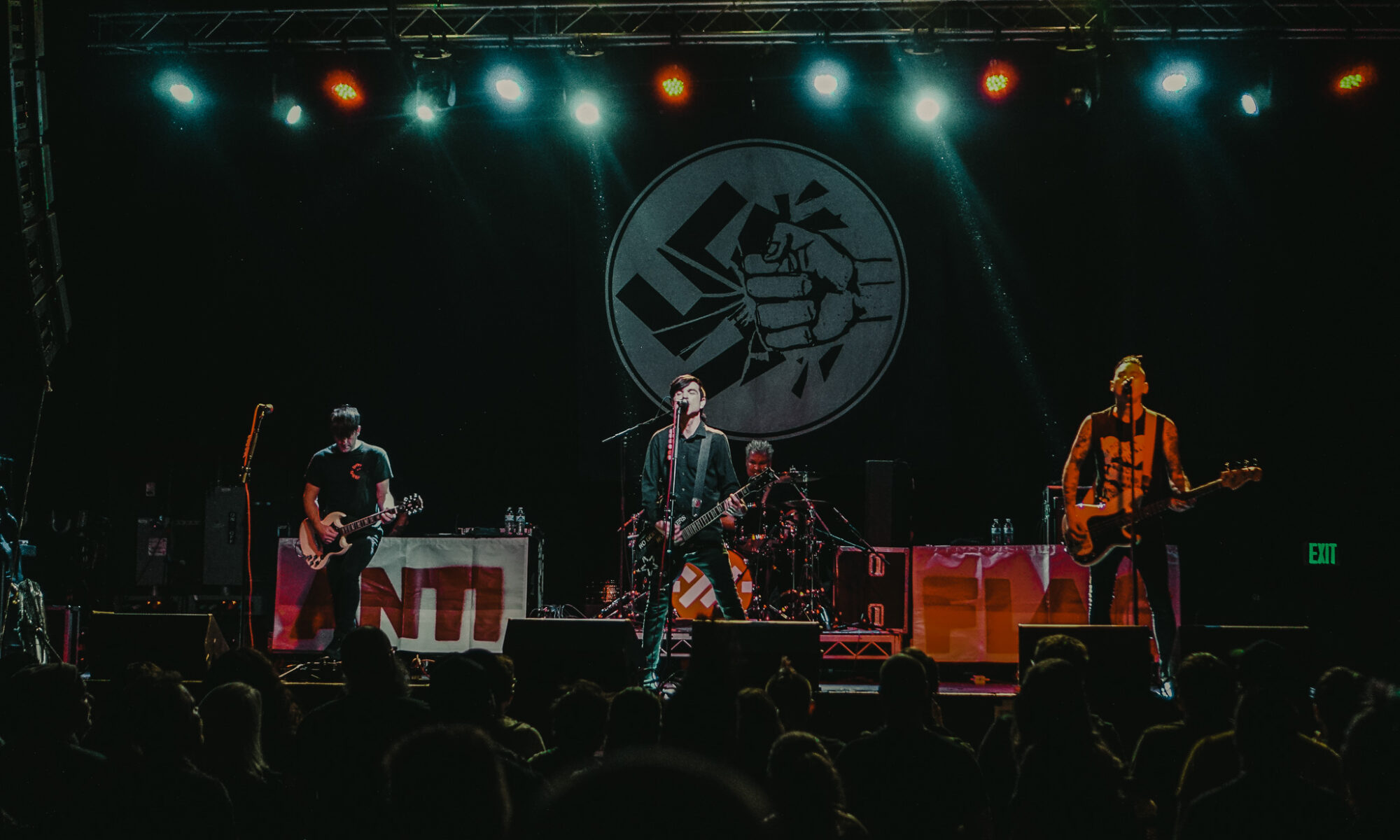 7 o’clock rolled around, fans of Anti Flag, Oxymorons, Dog Party, and Grumpster trickled into The Complex in downtown Salt Lake City. Soon enough the first opening band, Oxymorons, took the stage. I have heard of them before but haven’t ever had the chance to see them perform live. I was glued to them. The energy and the pure good vibes they had were incredible.  They also just released a new EP. It is online so definitely go check that out and show them some support!! I know I will be listening to it. After having too long of a break from live music due to the pandemic, they were able to bring all the energy to the crowd that we were needing.

Shortly after, Grumpster took over. One word for them. Phenomenal. I highly recommend checking them out. The vocalist and bassist, Fanny Walsh was so fun to watch. Full of life. I’m a sucker for old-school pop-punk.  Following was Dog Party, which let’s be real I am all for full female-fronted bands.

Right as 10 pm hit, the lights went out, the crowd started yelling, and the moment we all had been so excited for arrived!  Anti-Flag made their way on stage with a big “Hello Salt Lake City!”. Everyone was in an uproar. Lights turned back on brighter than ever and the show had begun. I was so hyped up and so was the crowd. Occasionally while I was in front of the barricade taking photos I would turn towards the crowd and absolutely loved seeing everyone jumping, headbanging, and going all out singing along with Anti-Flag.  They performed many fan favorites such as, “The Disease” and “The Press Corpse”.

Chris, their bassist, had my eye most of the night. From jumping off the drum stand to spinning around and kicking, it was very entertaining. Taking a gander through the crowd there were fans with their hair styled up into a tall Mohawk and bleached, in reality so so many people in that crowd were repping Anti-Flag tee shirts. One thing I have always loved about punk rock shows is the fans. They are some of the most supportive fans in the world.

Something that has stood out to me about Anti Flag as well recently is the fact they are so full of supporting equality. Chris the bassist was wearing a shirt that stated, “End Police brutality, Black Lives Matter, and No Justice No Peace”. Equality is something I believe we all should fight for and these guys are 100% for that. It gained mad respect.

Overall the night was fantastic. They had so much energy from start to finish. I am sure they all were so exhausted but they gave their all and did not let anyone down. They were so interactive with the crowd and pleased us all. For real though, I’m pretty sure they aren’t even capable of disappointing. Salt Lake City had such a blast. A night we all won’t forget and will be replaying in our heads.  Until next time!!