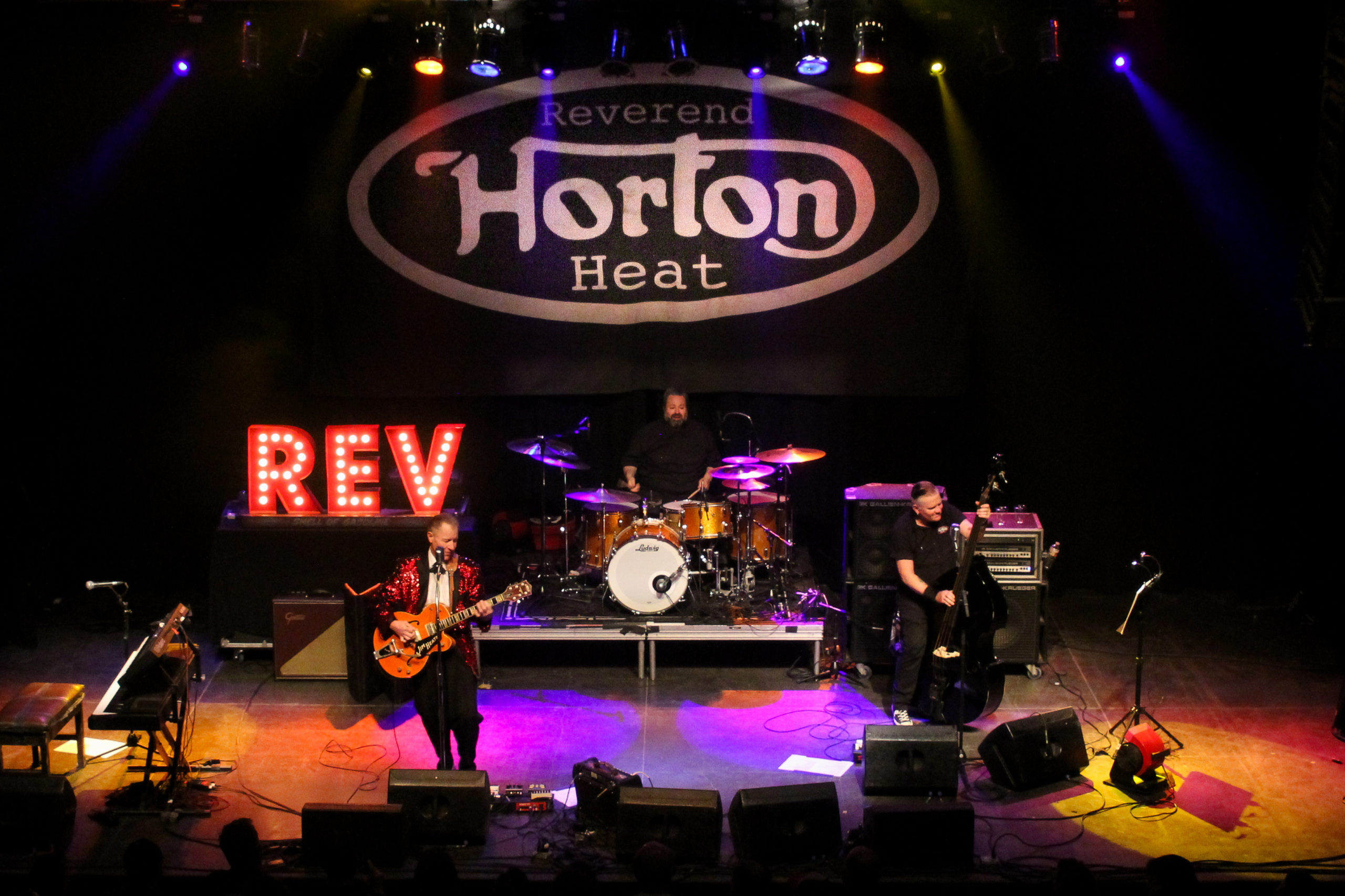 As I made my way to the front of The Depot towards the photo pit I made sure to take my time to take a look at all of the people who were dressed in their best Rockabilly get up.  It’s one of my favorite things about a show like this. It’s one of my favorite fashion styles to pair with a type of music. Women were dressed in swing dresses with a red bandana tied in their hair, with a jean or leather jacket.  Men in their cuffed jeans with a plaid or dickies shirt, greased up pompadour hair, and work boots or Doc Martins. Everything was set to see one of the best and most entertaining Rockabilly/ Psychobilly bands around, a band that has been at it for over 30 years, The Reverend Horton Heat.

Jim “Reverend Horton” Heath, Jimbo Wallace, and RJ Contreras took the stage with “Reverend Horton” donning a red sequin jacket. They broke right into “Ride Before the Fall”.  The energy in the room immediately rose to a new level. It was clear that many of the people were fans of RHH for many many years.  Heads were bobbing, feet were moving, and people were hooping and hollering. This was only the first song. Then Jim Heath came to the microphone to tell everyone it’s a “Psychobilly Freakout”!  As they played that song, more people moved away to the bar and filled the floor. People along the front barricade of The Depot were all smiles as the wait for one of their favorite bands was over.

“Thanks for hanging out with us tonight!” Jim stated.  “This is Saturday night”. He was right. It may have actually been a Tuesday night, but the way the show started and the way it would continue, it definitely felt like a Saturday night show.  The trio played a slew of songs off of RHH’s first few albums.  Songs like, “Hate to See You Cry”, “Five-0 Ford” and Big Red Rocket” delighted the audience and got me pretty fired up.

“Reverend Horton” then introduced the rest of the band. He shared with us that drummer, RJ Contreras played with many amazing artists, including disco queen, Donna Summer.  Contreras then played a disco beat and the Rockabilly clad fans began dancing disco as if we were in Studio 54. He then introduced stand up bassist, Jimbo Wallace. Stating that he has been part of Reverend Horton Heat since the very early stages of the band, and been along for 31 years. The intros were followed by crowd favorite, “Jimbo Song” where they sang along “J.I.M.B.O.” as Jimbo Wallace laid down his bass on its side, stood on it and proceeded to play a tasty bassline. It was amazing. My grandpa played standup bass. He would have loved Jimbo.

The red sequin jacket was gone and Reverend Horton Heat was getting down to business.  They next introduced keyboardist, John Countryman who played with them for the rest of the set.  John had played Jerry Lee Lewis in the musical Million Dollar Quartet. He made an immediate impact on the show.  His piano playing was the perfect styling for the show.  He would get a rousing ovation from the crowd whenever he was featured with a piano solo.  His fingers flew and I could hear the influence of Jerry Lee Lewis in his playing. To be honest, I was kind of hoping to hear Countryman cover one of “The Killer’s” songs.  I really enjoyed his playing throughout the show.

We weren’t finished with the guests just yet though.  Following John Countryman’s appearance, the featured guest of the evening, Deke Dickerson was introduced.  Deke is a singer-songwriter and guitarist. He’s known throughout the industry as a guitar expert who uses pretty much all vintage equipment.  Dickerson also has a column in Guitar Player Magazine. Deke Dickerson went on to tell us that he hadn’t played in Utah since 2004. He also shared with us that his appearance with The Reverend Horton Heat was in doubt.  He was in Spain just the day before and didn’t make it to Utah until 30 minutes before showtime. There were no signs of jetlag or fatigue coming from Deke. He sang and played as if he had spent the night at the Grand America Hotel’s best room. His seven-song set was well received by the RHH fans and they went wild when he performed Eefing, what he referred to as “Hilly Beatboxing”.  My favorite songs of his set were “Double Neck Boogie”, where Dickerson and Heath would play one of Deke’s double neck guitar at the same time and “Honky Tonk Hardwood Floor”. The crowd was dancing and the entire venue was in good spirits.

This show was so much fun!  The music was excellent. Each musician was a master at their craft and they all looked like they were having a blast on stage.  That good time flowed onto the concert floor. I saw a guy at the beginning of the show and the best way to describe him is to say he definitely didn’t look like a Rockabilly fan.  He appeared to be dragged there by a friend who was decked out in Rockabilly gear. But by the end of the show, he was dancing and grooving right along with everyone else. The music is infectious.  I saw another guy dancing to the point of sweating profusely. He randomly stopped by me and said, “This is what I’m talking about! People are dancing or moshing and no one is getting hurt.” I’m not sure if he had been talking about this with someone else and mistook me for that person, but he disappeared into the crowd before I could even follow up.  He was not wrong. The mosh pit wasn’t too crazy, and when people would fall, others were there to help them up. 31 years of this amazing band and they’re still going strong. I don’t know how they perform so many songs at that pace, but it was impressive and one of the best Tuesdays that I mistook for a Saturday I’ve had.