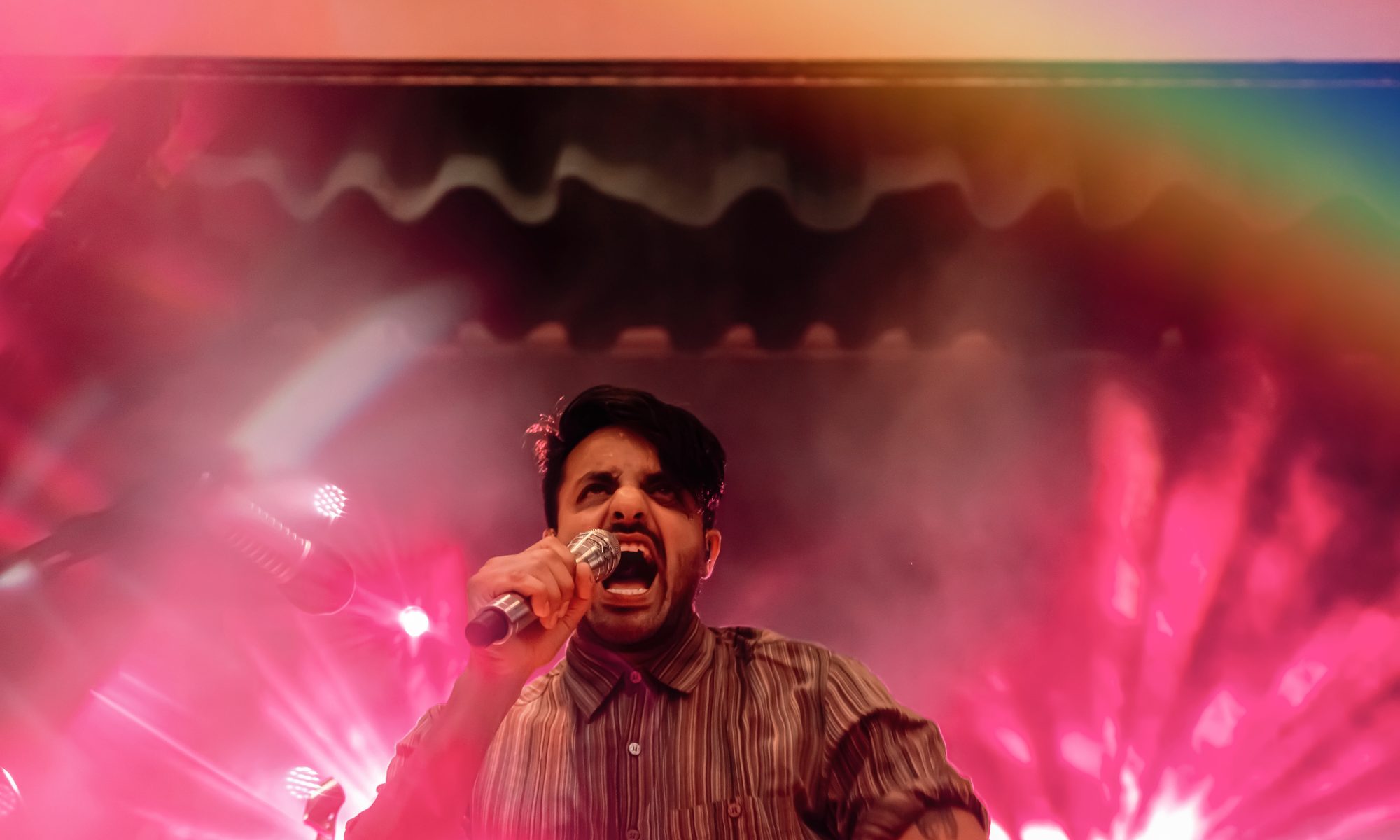 When students return to school in a few short weeks, and they’re asked by fellow classmates for some highlights from their summer break, I’m confident that this past Thursday’s SLC Twilight with Young the Giant, The Aces and Sego will be mentioned by every student who attended the Gallivan Center on August 1.  This show had everything. Good weather, a great headliner, and two support acts with local roots and large followings of their own. This has been the strongest lineup top to bottom at Twilight this summer. This is one of those shows when you see it announced you think “Oh yeah, this is going to be good!”. And you just hope that it lives up to the expectation.  I have to say that it absolutely did.

With amazing Utah freeway construction being what it is I was unable to make it for all of Sego’s set.  But I did walk into the Gallivan Center to witness an already energetic crowd watching Sego, a band who would headline the Provo Rooftop series one day later, finish up what I can only assume was an energetic set.  There have been some other shows in the SLC Twilight series where fans will trickle in and finally fill up the venue for the headliner. But with Sego being such a strong opener, fans arrived early to be sure to see them.  Clearly, their travel plans were better than mine!

Following Sego, The Aces took the stage.  It was just back in March that The Aces sold out The Grand room of The Complex down the street from the Gallivan Center.  It was good to see them back on a Utah stage and judging from the crowd I wasn’t the only one happy to see them performing.  It seemed like the feeling was mutual as The Aces were full of smiles on that stage. I was still blown away at just how many people were already there.  If I didn’t know the truth and someone told me that this was the headlining band, I would have totally believed them. People were jumping around and singing The Aces songs as if this was the final band of the night.  But the sun hadn’t even gone down yet! The Aces are so established here in Utah that it’s easy to forget they’re just getting things going. They seem like seasoned vets already! With their presence on stage, how well they play together and the overall quality of what they do I forget that they’re only one album into what I believe will be an extensive career.  It was good to see them again and I’m excited to see what they do next!

If there wasn’t a buzz in the air already there most certainly was one while the crew was setting things up for Young the Giant.  The band issued me a photo pass and while I made the correct decision to let Evelyn Salazar who used a photo pass she was offered by the venue to take these excellent photographs, I decided to make my way with the other photographers to the pit so I could get an up-close and personal view of the band and the fans up front who had arrived in the early afternoon to ensure their spot along the barricade.  Don’t get me wrong, I took my own photos. But I took them of the crowd, the buildings, and the other photographers. Things I would normally not have time to notice at the beginning of a show. While the photographers readied their gear we were positioned on the side of a stage in a place where we could look out and see the entire audience. They were so excited. Any strum of a guitar tech testing a guitar or a voice check into a microphone the audience cheered.  They were ready. Many of the photographers pointed out how excited the audience was and how cool this view was. We’re so fortunate to have the opportunity we do.

We got the all-clear from security and we made our way into the pit. Then after all that anticipation, Young the Giant walked on stage.  They have been on my radar for years but for whatever reason, I’ve never had the opportunity to see them live. It took all of three seconds to realize that this was going to be an incredible set.  They opened with the building “Oblivion”. And along with the song, the crowd’s energy grew as Young the Giant moved into “Something to Believe In” and we were off from there! It’s always so interesting to hear songs live.  “Something to Believe In” always felt like an intense but mid-tempo song. But live, the tempo felt nowhere near mid. People were moving and feeling every beat of that song.

It is impossible to miss the intensity of lead singer Sameer Gadhia.  You can see by these photos that he feeling every note he sang. The passion and emotion he displayed were so authentic.  There’s no way that can be fabricated. It was almost impossible to pull my eyes away from him. I had to remind myself that Evelyn and Efrain would be taking plenty of pictures of him.  I needed to pay attention to the so many other things going on. Gadhia led the crowd into a frenzied night of indie music bliss.

After leaving the pit I realized just how much more packed the place was.  I walked around hoping to find a decent place to see the rest of the show. I stood on the bridge for a little while and there was a pretty good view.  But at times I felt like I was watching people watch a concert. So I made my way to the back of the crowd. And while the Gallivan Center isn’t huge it’s laid out in a way that if you’re in the back it really isn’t easy to see.  So I moved on. During my journey around the Gallivan Center, I was able to see various pockets of people enjoying the show. I’m not sure what other Young the Giant crowds are like but the crowd at SLC Twilight was exceptional. People were dancing, they were definitely singing, and it seemed like everyone was in good spirits.  I noticed over in the VIP section where there was more room people were dancing freely. They had so much open space that they could flail their arms or spin around without fear of hitting anyone. That looked appealing but sometimes it’s nice to be right there with a throng of people. We’re all having an experience together so why not smoosh together to make sure we’re really having a joint experience.

About ten songs in, Young the Giant played “Cough Syrup”.  I recall thinking that seemed so early. But in fact, it was the perfect time to play it.  The moment the opening guitar riff began there was a collective and audible excitement from the audience.  Young the Giant has so many really good songs, but “Cough Syrup” is a hit song for a reason. It’s a great song.  The jubilant audience sang every word. If there was any fatigue from the band from having played this song so many times it had to have been washed away from how happy the crowd was when they heard it.  Like so many of the other songs, I heard “Cough Syrup” sounded so good live.

I was surprised at how fast this evening went.  Three great acts will do that to a person I suppose.  Before I knew it, Young the Giant was walking back to the stage to perform a four-song encore.  I loved hearing “Silvertounge” performed as the penultimate song of the night. It could have easily been the final song. People were so into it.  And the band was too. People had been standing for over three hours at this point but you would never know by the way they were dancing. And impressively they had more in the tank when Young the Giant closed out the night with “My Body”.  You could say that the crowd was young and that’s why the energy was so high, but I saw people of all ages at the show. I saw a couple who had to have been in their sixties jumping up and down singing “My body tells me Noo!” At this point, I was so far from the stage that I’m not sure which guitarist it was, but one was being crowd-surfed and somehow still playing all of the right notes!  The audience was in a complete frenzy! Sameer Gadhia was dawning a silver cape. I have no idea when or why he put it on, but it seemed oddly appropriate. It added to the performance. I may or may not be donning a silver cape while writing this review. I figured it couldn’t hurt right?

I think SLC Twilight at the Gallivan Center was the perfect place to see Young the Giant in concert.  I know I’ve missed them a number of times at various venues in Utah. But I don’t think I’ll be missing them when they come back.