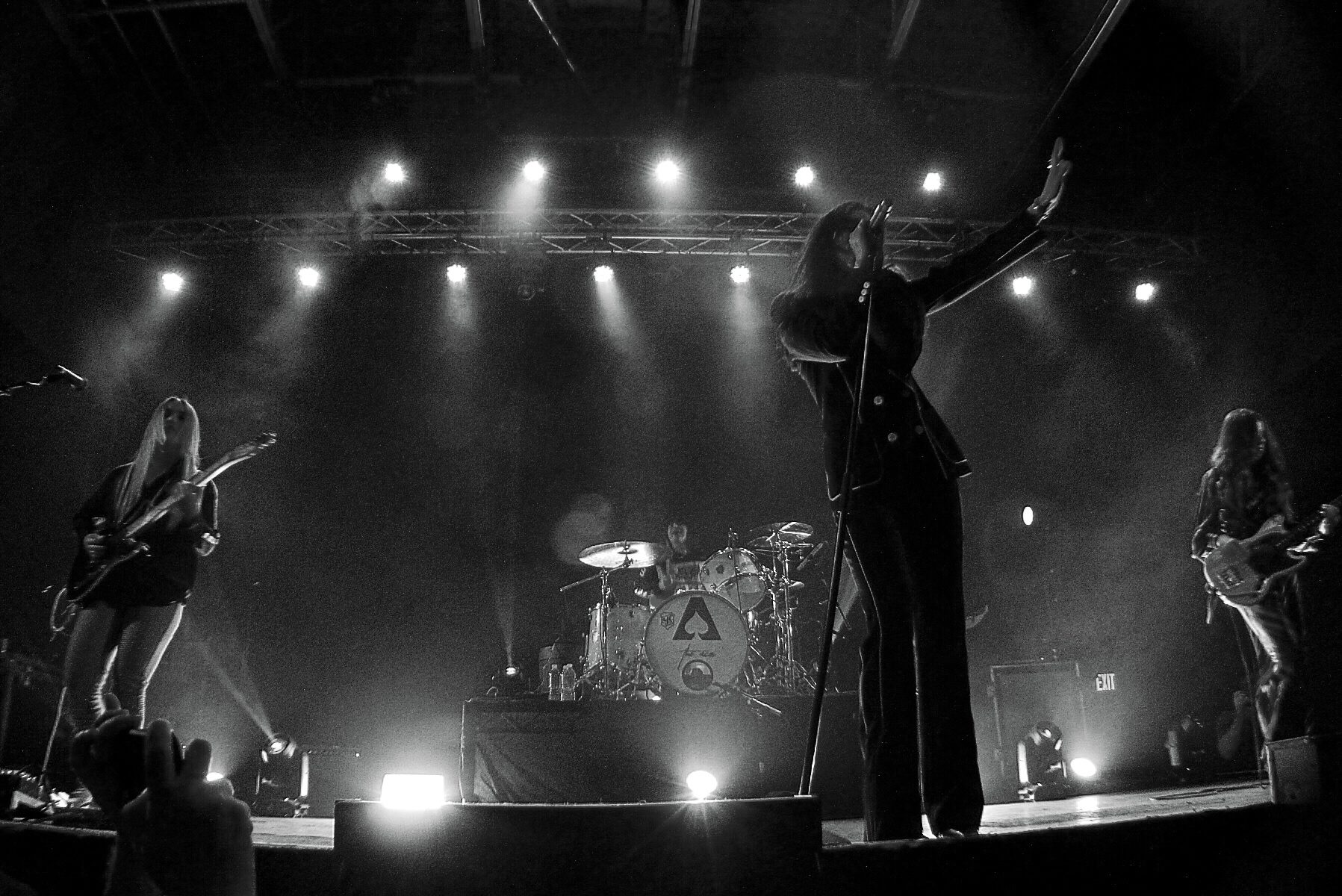 I’m not sure if there is a better thing in music than seeing a local band leave our town or state and become successful nationally. There’s a level of pride that is felt being from the same place or seeing a band like this from their early days rising from the house show to the headlining act. Such is the case with The Aces.  These four young women from Orem returned to Utah to close out their first headlining tour with a sold-out home town show at The Complex on Saturday night. And what a homecoming it was.

The Aces told us at the show that they’ve been a band for ten years. I haven’t seen them from quite the beginning.  Honestly, I’ve been familiar with the band for the last few years. I recall them headlining a Rooftop Concert Series show in Provo back in 2017, and just like many of the great Utah bands that have risen to international prominence, I’ve witnessed them make their way across the Velour Live Music Gallery stage.  It seems that if you’re a local band hoping to make it, it’s necessary to play Velour. It’s like a right of passage. They’ve gone a long way in their career in the relatively short time since I saw them at those Utah County shows.

When I made my way up to the front of the stage to take photos, I noticed not only a packed venue but a packed photo area.  As I displayed my photo pass to the security guard and stated, ‘Packed house tonight.’ He proceeded to tell me that it was by far the most amount of people he had ever seen in the photo area.  I have to say though, all the photographers were very courteous and friendly towards one another. It made what could have been a tense and competitive situation really pleasant.

The lights went dark, the screams went up.  The Aces walked out, and despite the dim lights, I was close enough to see each one of the band members huge smiles on their faces.  It was impossible not to be really happy and excited for them. I think every artist dreams of playing a sold-out show in their home town.

As the stage lights went up, the crowd went crazy as the band performed “Put it on the line” from their debut album When My Heart Felt Volcanic.  They followed with “Stay” and “Bad Love”.  Lead vocalist Cristal Ramirez then addressed the audience.  You could barely hear her above the screams. She told the audience how happy the band was to be back in their home town and play in front of the best fans in the world.  The audience loved hearing that and seemed determined to live up to that reputation. Throughout the show, Ramirez made a point to mention how proud they were to call Utah home. She beamed with pride when she stated that they were from Orem. As any Utah crowd, they loved hearing their state called out from the stage. But it was clear that this carried extra weight because The Aces are from here.

If I was to guess, I would say the audience was about 70% female.  I couldn’t’ help but think how awesome it was for some of these teenage and preteen girls to see an all-female indie pop band doing their thing.  Many times we might see a female lead singer, or pops star, but she’s surrounded by male band members. So I’d imagine seeing talented female instrumentalists had to be motivating and inspiring.  I’m not a teenager or a girl and I was inspired and impressed by what they were doing on that stage!

Some of the highlights for me was their performance of “Last One”.  The entire audience was dancing and singing along when prompted. There was an amazing vibe in The Complex.  I’d imagine many members of the audience were longtime fans, friends or family of the band. It seemed like that gave an extra boost to the energy of the audience. Perhaps more than they may have felt on the rest of the tour.  I’ve never seen The Aces outside of Utah. But I do follow them on social media, and while the audiences I’ve watched in their stories look amazing, I can’t imagine there were any more fired up on this tour than the one I witnessed at The Complex.  Other highlights included “Volcanic Love” and “Fake Nice”.

Following “Fake Nice”, lead guitarist, Katie Henderson addressed the audience.  She actually really addressed her band mentioning how much she loved them and was so happy to be having this experience with them.  It was one of the most genuine things I’ve seen on a stage. While this is now a headlining band, they’re still at the beginning. They’re so young as far as their career goes.  They are experiencing so much, I’m assuming for the first time, so to have friends like these in their band has to be special. The rest of the band responded with a group hug and encouraging her to not make them cry.  They lead into their final song of the main set, “Waiting For You”. They walked off stage with the crowd shouting “One more song!”. They returned and performed two.

Before their final song, Cristal Ramirez dedicated the song to a friend who had passed away.  Becoming emotional she stated that their friend’s family was in attendance. They closed the show with their single “Stuck”.  I thought it was a cool idea to dedicate a fun upbeat song to their friend. It gave the audience and her family a way to celebrate this young girl’s life in an uplifting fun way.

The show ended and as The Aces took their bows, their families walked on to the stage beaming with pride.  They gave their daughters/ sisters big hugs. It was a really cool moment and put things in perspective. We see these artists and we’re separated by a stage and gates, and we admire them because of their talent. But when it comes down to it, they have families like we do that are proud of what we’re doing whether it’s being in an indie band, writing concert reviews, going to school or just trying our best to succeed in whatever endeavor. It was clear how happy their families were for them and their success. That moment made the night feel very home towny. (Is that a word?)

I don’t think I’ve seen a show where I was constantly happy for the band that they were doing what they do.  I looked around the audience throughout the show and everyone was having a blast. And as I stated before, it was clear that The Aces felt the love.  They are a talented band. I was so impressed with the cohesion of the rhythm section consisting of bassist McKenna Petty, and drummer Alisa Ramirez. Katie Henderson is the good guitarist and the audience loved her whenever she played a solo or a signature riff.  Cristal Ramirez is an excellent frontwoman. She sounds great on vocals and she knows how to work a crowd.

I’m so excited to see what these four talented women have in store for us going forward.  We’ve been lucky enough to get to see them longer than the rest of the world. This is just the beginning for The Aces. But I have a feeling down the road we’ll be saying “I saw them at their homecoming show at The Complex!”. I think we’ll be proud to claim them as one Utah’s own.