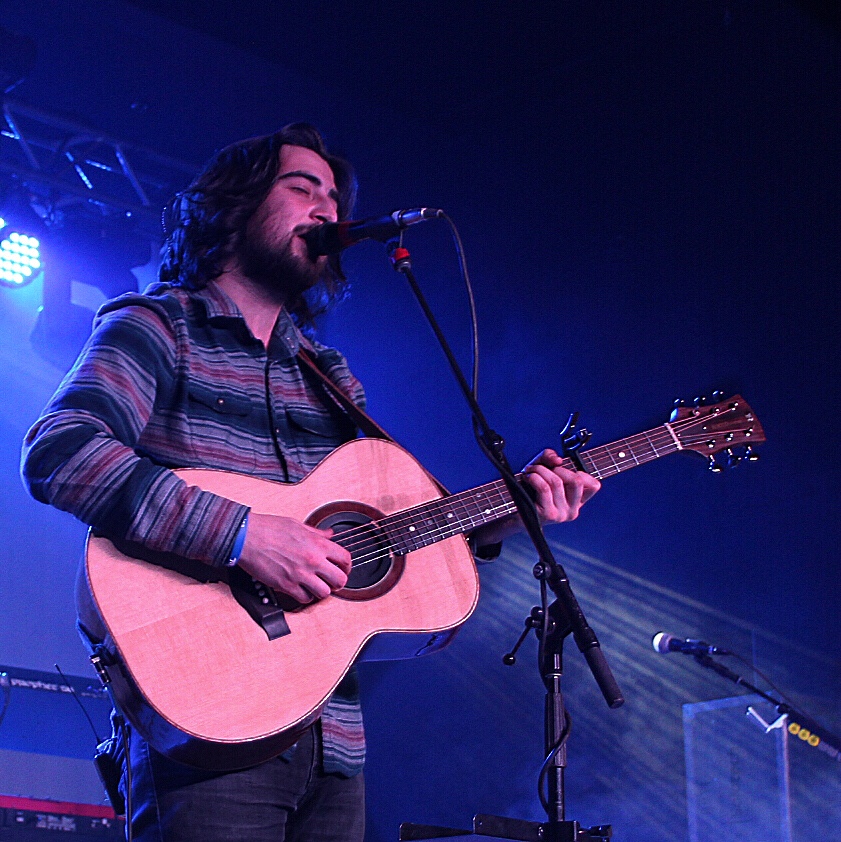 When I showed up to The Union there was a sizeable security line.  Especially in the lines where bags needed to be checked. Since I had my camera with me, that was the line I would be spending my time in.  No complaints. Better safe than sorry. My only concern was getting into the venue in time for the show. As I approached security personnel I heard a huge roar from the crowd inside the venue.  As I was hurrying to get my photo pass and ticket, I started running through the timeline in my head. I checked the time and it was exactly eight o’clock. Was James Bay already on this early?  Did Noah go on at 7:30? Did I miss the whole set?! I usually don’t cut it this close to showtimes so I wasn’t thinking clearly. I just wanted to get inside the venue. As I walked through the doors and the stage appeared, it wasn’t James Bay on the stage, it was Noah Kahan.  And the crowd was going nuts as if he was the headliner.

As I made my way up to the front of the venue I noticed people clapping and singing along to “Passenger” a song off of Noah’s Hurt Somebody EP.  People were singing along and the lights from the stage were revealing so many smiling faces.  Noah followed with “False Confidence”. Again, the crowd went nuts and people were singing every word.

Noah dedicated the next song to a friend of his that passed away.  He mentioned how much his friend would have loved what was happening in Noah’s career.  He stated that he didn’t know if this song would make on an album or if it would ever be heard anywhere other than in concert, but he liked to play it when he was somewhere special because it made him feel like he was bringing his friend with him.  This delighted the Utah crowd. Noah told the audience that his friend loved the mountains so he couldn’t think of a better place to perform “Carlo’s Song”.

Noah followed his dedication with his new single “Mess”.  I thought this was a perfect time to introduce this brand new song and give the crowd a chance to become familiar.  After all, that’s why artists open for bigger acts, so they can introduce their music to potential new fans. But as Noah performed “Mess”, a song that has only been out maybe a couple of weeks, much of the audience sang along.  They knew the song! They knew the song well. That had to have been an awesome experience for Noah.

The penultimate song was Kahan’s biggest single to date, “Hurt Somebody”.  Noah mentioned that it was the song that changed his life. He mentioned that it has gone double platinum in Australia, which is still so hard to believe for him.  The song has gone gold in Canada as well which Noah finds more believable somehow. The three thousand plus audience clapped along, sang along, and went crazy whenever Noah would raise his voice or hit that growling rasp that he’s quickly becoming well known for.  When the song was over the crowd roared their approval. Noah was noticeably affected by the response.

The all too short set came to an end with “Young Blood”.  Noah told the audience that he used to get paid with gelato so this night had been a far journey from those days.  He told the crowd how much he always loved coming to Utah. He said this was the “dopest” crowd he’s ever played for and the best show he’s ever had in Utah. I couldn’t agree more.

I’ve interviewed Noah a couple of times.  He’s friendly, funny with his self-deprecation and really humble.  Now two interviews with someone doesn’t mean I know the guy. However, I couldn’t help but be really happy for the guy.  That audience was so great to him at The Union. If I didn’t know James Bay was coming on stage next I would have thought Noah was the headliner. That’s how great the response was from this young Salt Lake crowd.  I hope the rest of this tour measures up to Saturday night at The Union. I’m sure there will be great shows, but I find it hard to believe that any of them will quite reach the heights of this one.