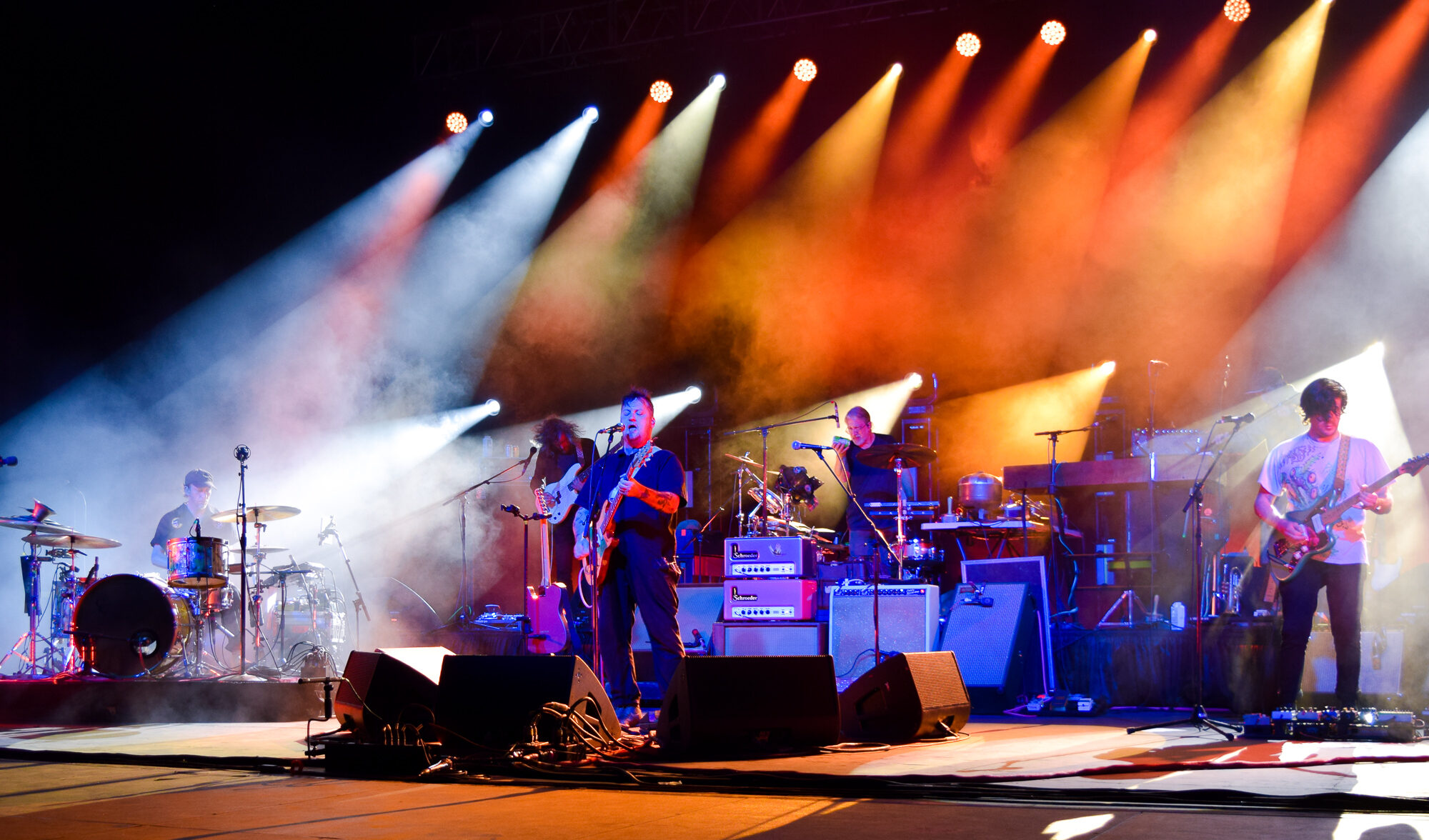 Modest Mouse created the perfect soundtrack for the slow-motion apocalypse we’ve been living for decades. They’ve always been unafraid to explore the darker aspects of life with uncanny lyrics from a deep, artistically informed well. Their catalog is stuffed with lines littered with treats for literary nerds: allusions to Bukowski, Woolf, Fitzgerald, Sandlin, McCarthy, and more I’m sure I haven’t picked up on yet. It’s lit rock at its finest.

They rode in on a tide of nihilism, opening with “The World at Large,” a perfect description of listless wandering, with golden lyrics. (“My thoughts were so loud, I couldn’t hear my mouth.”) On stage was the lead singer/songwriter/guitarist/banjoist, Isaac Brock, a traditional drummer, a bespoke percussionist (with some of the most interesting percussion gear I’ve seen live), a bassist, a rhythm guitarist, and a keyboardist/trumpeter. On “Be Brave” Brock emphatically shouted the titular chorus: it was the sound of a person trying to bolster themselves against the meaningless horrors of humanity (listen to this song and read its lyrics).

I will argue to my death that Isaac Brock is one of the cleverest wordsmiths of our generation. People who don’t like his lyrics are the same people who don’t understand poetry. Take “Satellite Skin.” Its lines are sly enough to entertain on their own merit—the music is a bonus. (“If you break these moth-wing feelings, powdering dust on your fingers, we know we’re not praying: we’re kneeling.”)

Things slowed down and an acoustic guitar came out for “Ice Cream Party,” a song that gets sadder the longer you listen to it. “Float On” is a relatively optimistic song, but it’s also a chronology of minor disasters. “Never F*** a Spider on the Fly” is a song about surveillance, digital manipulation, and echo chambers. It uses a clever play on words with “web.” Much of The Golden Casket (released this year) ruminates on the havoc created by the digital age as the scales tip between nature and technology. “The Ground Walks, With Time in a Box” was full of fancy guitar solos and long instrumentals. It was impossible not to dance.

Much of their music exposes the oft-ignored depravity that surrounds us. “Lampshades on Fire” is a prime example. The song holds a mirror to the ugliest aspects of humanity: greed, waste, endless consumption, laziness, self-absorption, destruction, etc. that all lead to planetary disaster. It highlights the ridiculousness of our current state. We’re so used to shirking responsibility for the mess we’ve made that we’re hoping to find another planet to live on rather than take care of the only one we know sustains life. Brock stares in the face of what is ugly, unjust, and untenable and calls it out with perfect irony and deadpan lyrical sarcasm.

I adore this band. They’ve always given us the whole package, shaped by Isaac Brock’s vision. Not only is the music good and the lyrics outstanding, all of their creative output is unique and cohesive: their merchandise, their music videos, even their social media. Audience members shouted their love throughout the night.

The crowd immediately clamored for an encore when the band left the stage. The longer they waited, the rowdier they turned. People howled, stomped, screamed, and banged chairs. The security guards started to look legitimately concerned. We got six encore songs, closing out with “Ocean Breathes Salty.”

The World at Large

I Came as a Rat (Long Walk Off a Short Dock)

Leave a Light On

Never F*** a Spider on the Fly

Satin in a Coffin

The Ground Walks, With Time in a Box

Back to the Middle