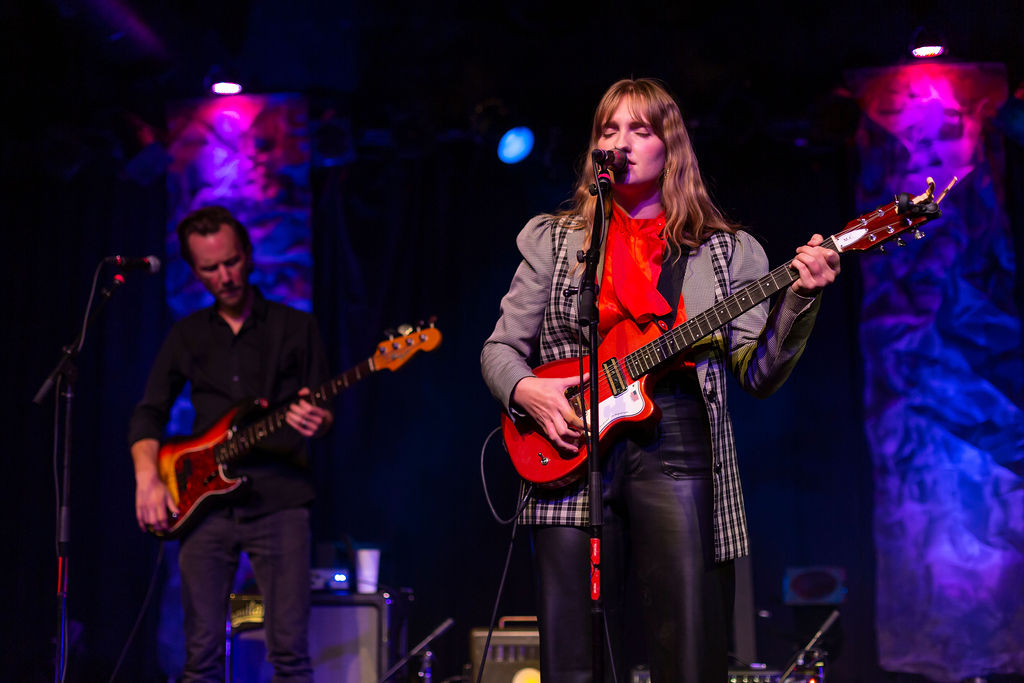 Grammy-nominated singer-songwriter, Madison Cunningham played The State Room this past week on her “All I’ve Ever Known” tour to The State Room in downtown Salt Lake City. When I was invited to cover this concert my initial excitement was related to returning to The State Room. After a long hiatus due to the pandemic, it was so nice to step foot into that venue. I really missed it. It’s one of my favorite venues in Utah and it never suffers from a lack of talent coming through its doors. September 29th was no exception. Madison Cunningham is an artist you should get to know.

As I walked through the poster-lined hallway from the bar and merch area of The State Room to the performance space my excitement grew. Live music is amazing, but live music at The State Room is “amazinger”? You know what I mean. There’s something special about that place and I can’t wait to get to more shows there.

When I showed up to cover the Madison Cunningham concert I fully expected to see an Americana show. After all, Cunningham’s Grammy nom was in the “Best Americana Album” category. But when I think of Americana I’m thinking along the lines of Billy Strings, Trampled By Turtles, Old Crow Medicine show type of Americana. This was not that. I don’t know that I would classify this as Americana. What would I classify Madison Cunningham’s music you ask? Well, I spent the entire show trying to figure that out.

I reached out to Paul Jacobsen of Lower Lights (another excellent American band) and Paul Jacobsen & Madison Arm fame, to ask him this very question. I spotted him at the concert and wondered if he’d have some insight on what genre Cunningham should be listed under. His first response was, “Tough.” Amen to that! “Definitely has a lot of Beatles, Joni (Mitchell), and Rufus Wainwright vibes. Sophisticated Alt-Pop? There it is. Madison Cunningham is a singer-songwriter who makes Sophisticated Alt-Pop. I can get into that. Thanks, Paul!

The first thing I noticed was how smooth Madison Cunningham’s voice was. The subtle groove and the smooth vocals had the crowd bobbing their heads. I could listen to her sing all day. I found myself lost in her voice. I’m a fan of good lyrics and melody, but at times I just sat back and simply enjoyed the sound of her voice.

Madison moved quickly from song to song. The pace of the show was not rushed, but there was no wasted time. I’d say it wasn’t until about song three or four before she addressed the crowd. I really liked that. There are times when a show just doesn’t need a lot of chatter from the artist. The music does the talking. I did enjoy when Cunningham did speak with the audience. She shared how good it felt to be in a room full of people. That sentiment was shared by everyone there.

The second thing that stood out to me was how good Madison Cunningham was on the guitar. Just like her voice, I found myself becoming lost in her fingerwork and skill. Her playing is brilliant yet understated. That could be used to define all of her music. Cunningham’s music has what I call a “Sound Grenade” quality. You hear it in the moment and then after a bit of a delay there’s this, “Wow! What did I just listen to? That was incredible.”.

“Pin It Down” was a clear fan favorite. And soon to be fan favorites were the series of new songs Cunningham introduced to her fans. She spoke about having written these songs at home during the pandemic and how it’s a strange place to write music. She was happy to let a live audience hear them finally. “Hospital” was a song I particularly liked. It’s about being cooped up and feeling like she was going insane.

Cunningham performed a cover of Paul McCartney’s “Arrow Right Through Me”. I love when a cover gives you a new twist while still sprinkling in recognizable elements of the original. That’s exactly how this cover was arranged. I’m sure if Cunningham hadn’t mentioned that this was a cover, most people would have thought it was hers. I’m a big Paul McCartney solo and Wings fan. I was delighted to hear this.

As the concert moved along I noticed a large number of fans moving from the seated area to the floor. There was a pocket of people that were so into the show they danced and moved as if they were in a huge arena and the entire place was going nuts. But I got it. The music was infectious, the band was amazing, and the feeling was so good. People just wanted to be closer to where the music was.

My favorite two songs of the night were “Life According to Raechel” and “L.A. Looking Alive”. “…Raechel” I believe is a new song. It’s about Madison Cunningham’s grandmother who passed away before the pandemic began. Cunningham shared that it was the first loss she had felt like that and you could feel it in the song. She performed it alone with an acoustic guitar. It was so beautiful. There was this haunting Surf Rock feel to it. I mentioned before that I love lyrics and melody. This time I was fixated on those. The lyrics are touching and the melody reminiscent of the great Everly Brothers. At times Madison’s voice reminded me of Harriet Wheeler of The Sundays.

Now I’m throwing in all these other artists. “This sounded like this, and this sounded like that.” But really, Madison Cunningham is an impressive artist with a sound all her own. I cannot wait for her to come back to Utah. One day in the future I can see myself at her show in a large venue and I’ll be saying, “Oh Madison Cunningham? I saw her when she played The State Room.”

To listen to Madison Cunningham or to learn more about her go to madisoncunningham.com