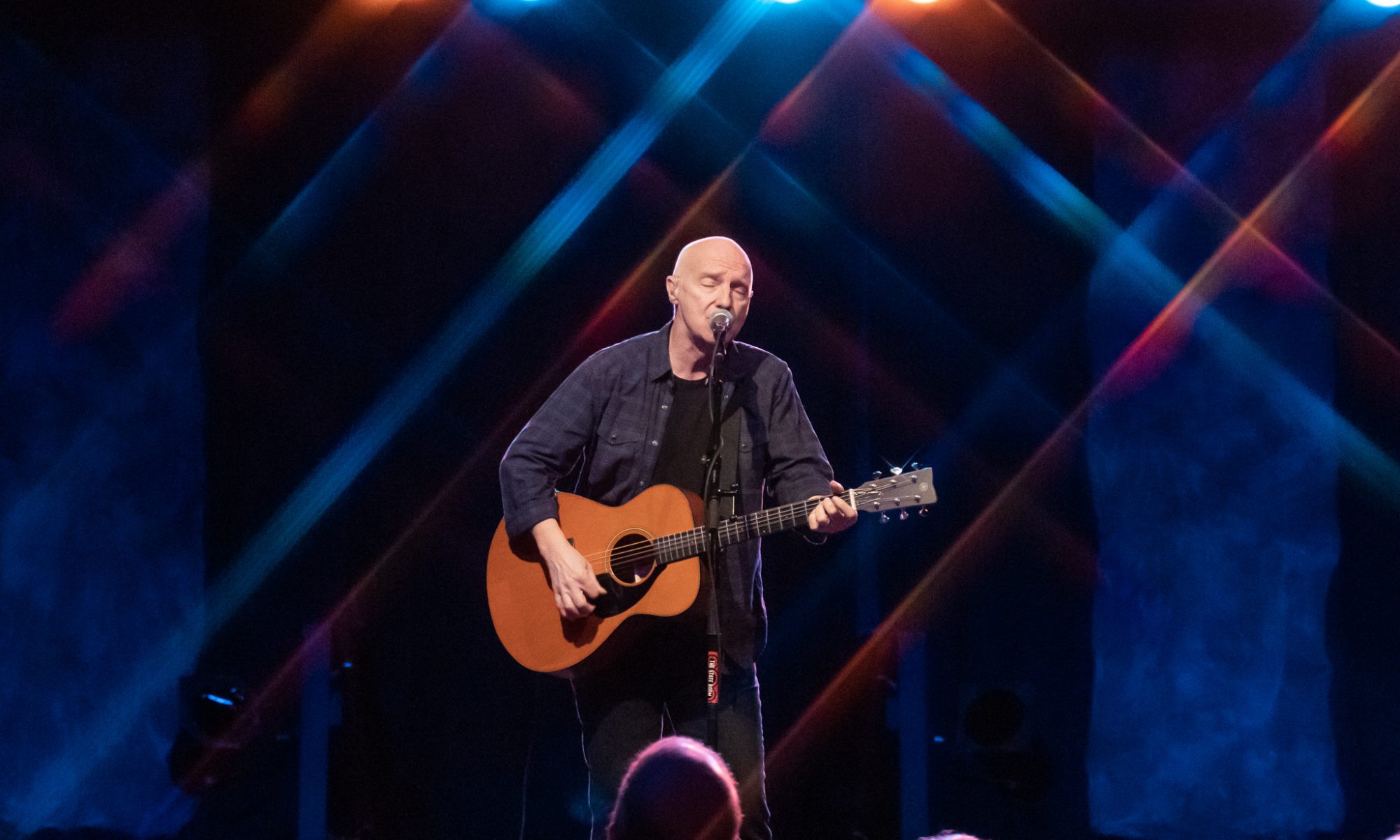 By: Kevin Rolfe with contributions by Heather Callister

Friday, January 24, 2020, at The State Room, was a special night for any music fan, but especially for fans of Midge Ure of Visage, Ultravox or Thin Lizzy fame.  Midge Ure gave his fans a treat in one of Utah’s best music venues with his Songs Questions and Answers acoustic tour.   A more appropriately named tour there has never been.  It was just Ure a microphone and a guitar on that stage.  He walked out and played his only truly planned song of the evening, “Dear God”.  From there it was in the hands of the audience.

Midge bases the rest of the show on questions from audience members about certain songs.  I asked him if he was ever worried that fans would choose one of his deeper cuts, or know his songs better than him.  He told me, “They’ve all got their favorites for whatever reason. That’s what they want to hear. The majority will ask for the same standards or hits.   Some will ask specific questions about Band-Aid or Live Aid or Thin Lizzy or Ultravox or Visage oh whatever and that brings up specific songs that I can do quite easily. But there was someone at my Portland show and he had seen a previous show on the tour.  He told me it was a completely different show. Besides the opening song, and a couple of songs that everyone will want to hear it’s a completely different show. So that’s just how it unfolds. It’s either very brave or very stupid.”

In a past conversation, Midge and I discussed some of the frustrations that can come with modern technology.  Specifically with people recording his shows or texting while he’s up there performing. I asked him this tour was a way to make each night different so that his shows weren’t spoiled by people posting his setlist or videos of previous shows online.  Midge shared with me that he, “couldn’t replicate these shows if I tried. Because it really is audience driven. I hadn’t thought about people videoing and posting set spoilers, because we had discussed that in the past.  These days by the time you get to the next town people already know what you’re going to do. But with this, they can’t really do that. And if you didn’t hear what you came here to hear, it’s because you didn’t put your hand up and ask a question!

About three songs in, I knew this night was unique and special. Midge played “Love’s Great Adventure”, a song that I have been wanting to hear him play for his last few stops in Salt Lake City, and was left off the setlist. It was a welcome surprise and an indicator that there was no telling what would be played in this show.

With “So Long”, he reflected on what his life would have been like had he not chosen music as his career path. His father encouraged him and his brother to have a trade (engineer, plumber). Aren’t we glad he chose music?! It makes me wonder how many plumbers out there could have been one of the great musicians we’ve never heard of.

When talking about, “Fragile” he shared how he got involved with alcohol and ultimately landed in rehab. He stated that rehab was “the most expensive holiday “ he’s ever been on. He stayed away from drugs but no one ever told him how alcohol could affect him.

Before Ure performed, “Let it go?” Midge shared that he was asked at a music school what advice he’d give musicians to last their whole careers. He told them not to write songs in stupidly high octaves. Because hopefully in 40 years you’ll still be singing your songs. He said his throat was having a hard time hitting those high octaves.

This would be a good time to share just how amazing Midge Ure’s voice still is. Again, it was just him and his guitar up there. He didn’t have any drums, or synth to hide behind and he sounded incredible. His voice has matured, but he’s found a perfect groove for his voice to settle into so that he can uphold the integrity of his songs. I love hearing him sing his songs with the way his voice currently sounds.

His voice was bothering him on this night, so he did shy away from some of his higher songs, but I thought he sounded great and would have never known he wasn’t able to be in full voice with how good the songs he did perform sounded.

In discussing a crowd favorite, “Fade to Grey” from Visage, Midge shared that half of the band Rich Kids liked synthesizers, and that half formed Visage. From there, Visage led into Ultravox.

It’s amazing to think of how much songwriting success Midge has had, from Visage to Ultravox to worldwide Christmas anthem, “Do They Know it’s Christmas?”. I asked Mr. Ure how he feels his songwriting has evolved over the years. He told me, “It grows as you get older. You hope to get better at it. That isn’t always the case. But the window of what the songs are based on are changing and getting smaller because you’ve covered a lot of the subject matter already. You don’t want to cover the same thing.”

A show like this is what you always hope to see from an artist you truly love. He didn’t sing, “Vienna” or “Dancing With Tears in My Eyes” or all of Ultravox’s greatest hits, but it almost went unnoticed. The crowd was just so into everything he was talking and singing about. People were really in the moment which had to have made Ure pleased. Each time Midge comes to Utah his show is just a little different, and all the more interesting. I’m sure next time he comes back, he’ll sing all the hits, but we won’t have all the stories.

I chatted with a man named, Jordan after the show. He told me this was “the most fulfilling concert” he had ever been to. It was so engaging.” He loved how Midge interacted well with the audience answering their questions & playing requests. I agree with Jordan. It was an incredible night of music and stories.

I’ve always thought, “I could sit and listen to Midge Ure talk and sing all night.” Well, now I know that’s really true. Counting down until he returns to Utah.