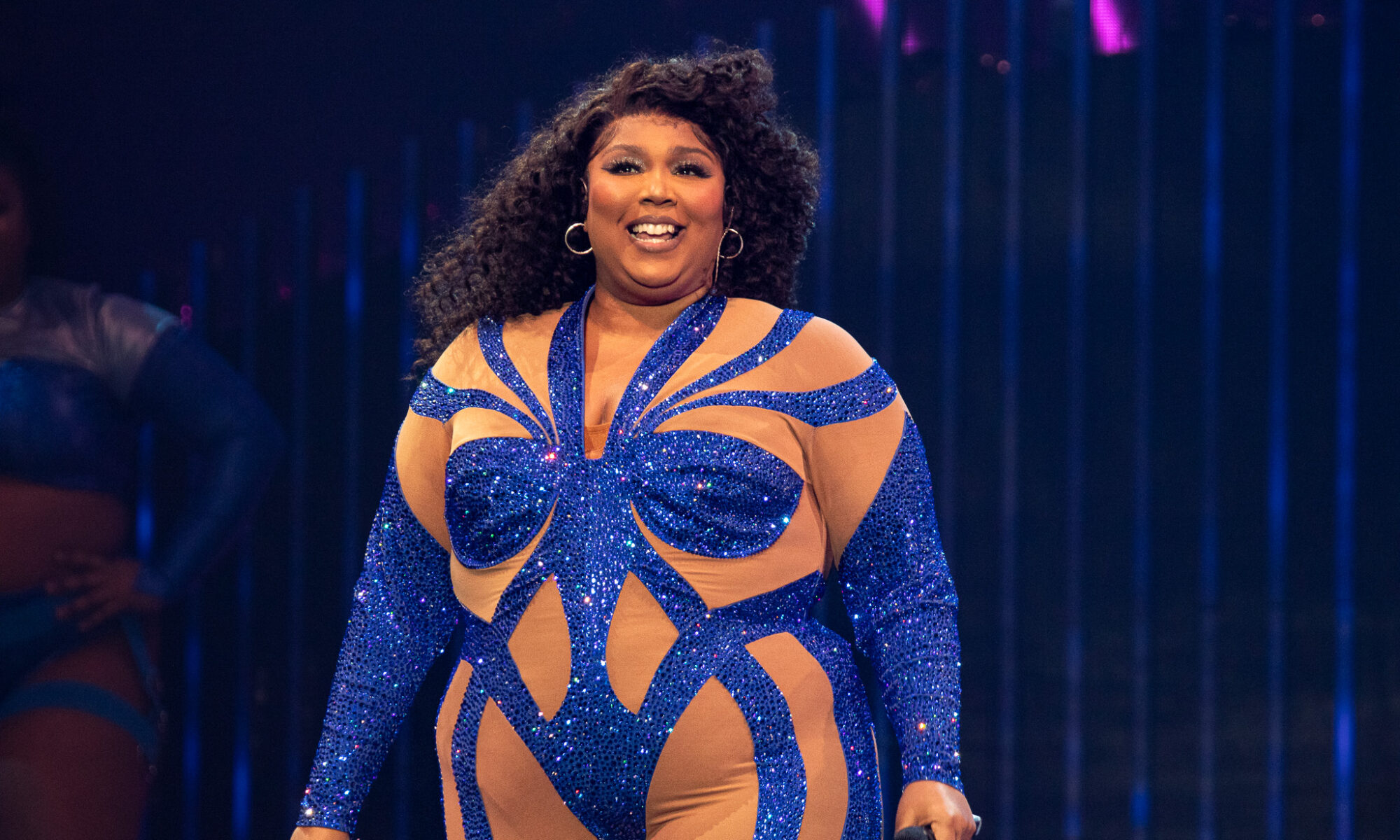 Lizzo played The Union in Salt Lake City in April of 2019.  If you’re a Lizzo historian you know that this was not catching her before she launched.  I would say she was mid-launch.  To stick with the spaceship analogy let’s say she was breaking through the atmosphere and about to orbit.  I mean right after that April concert, she was absolutely everywhere.  I would tell people, ‘Oh, she just played here.’  “Did you go?” ‘No, I had a scheduling conflict.’

People seemed much less interested in talking to me once they knew I was one of them, someone who missed the opportunity to see Lizzo in a smaller venue before she began playing arenas.  From all accounts that was an incredible show.  I’ve been chomping at the bit to see Lizzo return to Utah so I can finally see her live.  She made her return on November 2 2022 at Vivint Arena.  And if I can coin a phrase, “It’s about damn time”!

When I arrived there was a DJ hyping up the crowd.  The crowd was buzzing big time already.  He announced Latto and she appeared at the top of a large digital screen.  The audience was fired up. They were ready for the Hip Hop star.

Latto is a bold, brash, and confident woman.  She owned the stage.  Some dancers joined her and they complimented her performance well.  Latto told us that Salt Lake City was one of her favorite cities.  I saw a few people looking at each other unsure if she really meant it.  But she said it with such confidence that I have no reason to doubt her.   I could tell some of the audience were blushing at her sexually suggestive lyrics.  But for the most part people were loving the confidence.

There was a moment in the set where Latto brought a man named Steve on stage.  She sat him down on a chair and the dancers and Latto one by one danced suggestively in front of him.  The crowd cheered Steve on and by the look on his face, he seemed to be basking in the experience.  As he was led offstage you could hear chants of “Steve, Steve, Steve”.

The whole experience with Latto was a whirlwind.  It felt like so much was happening in a relatively short amount of time.  There was a fog gun. I don’t think I’d ever seen one before. The dancers would point it at an audience member and they’d be doused with fog.  They threw shirts out, danced all over, booty clapped, and carried pink picket signs saying “My Body My Choice” and “Women’s Rights” on them.  The set was action-packed.  Latto left the stage to a roaring audience.  The sold-out show could not have been anymore primed for Lizzo.

It was finally time.  People could hardly stay in their seats.  Sometimes I’ll be at a show and I’ll see people wait until the last minute to stand up.  Or maybe it’ll take them a few songs before they’re fully into the show.  But people were standing up before the lights dimmed.  Lizzo’s impressive all female band took the stage and the music started.  Lizzo rose from below the stage and as the blue sequins from her costume sparkled in the light the crowd was deafening.  Most people were already in their seats, but there were a few who rushed to get to their spots.

The set opened with “The Sign” off of Lizzo’s most recent album Special.  That was followed by another song of Special, “2 Be Loved (Am I Ready)”.  From the first note of that song to the end of the night I don’t think anyone stopped dancing.  The thing I love about many of Lizzo’s songs are how exposed, honest, and vulnerable her lyrics are, yet so often wrapped up in a danceable beat.  This song is a perfect example of that.

Before things really got going there Lizzo needed to know how to address us properly. Lizzo felt like Salt Lake City was too much to say all night.  So she wanted to know if we wanted to be called Salt Lake or SLC.  SLC won by a landslide and that’s what we were addressed as for the rest of the evening.

I have to say there’s something about being in a room of people dancing as if no one could see them.  People seemed so free at this concert.  That’s attributed to Lizzo and her desire for her concerts to be a no-judgment zone.  She asked where her big girls were at and got a huge response.  She preached body positivity multiple times and it really resonated.  I have to say I loved seeing people of different cultures, races, backgrounds, sizes, and heights just letting loose together and having a great time.  That says a lot to me about Lizzo’s message getting across.

Lizzo was so engaged with her audience the entire night.  I’m sure for so many inside Vivint Arena this felt like a personal experience.  And for how big that venue is and for how many people were there, Lizzo did quite a bit to make it personal for everyone.  She brought someone on stage and sang “Birthday Girl” finishing with the audience singing the traditional “Happy Birthday” to the fan.  She took selfies with the lucky birthday girl then continued on with the show.

Lizzo started crying at one point. Mid song.  She seemed overwhelmed by the moment.  Her roadies were quick to hand her a towel which made me thing that this was a possibility every night.  I’m not cynical enough to say it’s staged.  I think she genuinely gets moved that often in her concerts.  After she dried her eyes she started making her way back from the catwalk to the main stage.  Before she got there Sasha Flute made her first appearance.  Now in case you don’t know, Sasha Flute is the name of Lizzo’s first love.  Her flute.  She whaled on that thing and I must say, I don’t think I’ve heard an audience go nuts for a flute solo like that before.

Much to my surprise things ramped up even more when Lizzo sand “Water Me”.  She then returned to the stage after a wardrobe change and belted out, “I’m crying ’cause I love you!”.  The place went nuts and each time that hook was sung in “Cuz I Love You” they sang it louder.

I think my favorite part of the concert had no music.  Lizzo made her way along the catwalk, calling out each section, and pointing out specific people in those sections.  Lizzo pointed out their outfit, their smile, or their sign.  She signed a 12 year old girl’s drawing.  She read from a book a fan handed her titled “Why Lizzo is Perfect”.  I think the fan thought Lizzo wrote or published it.  Lizzo confirmed that she did not, but wanted to see what it said.  She read a line that read something to the effect of, “Lizzo went from sleeping in her car to taking over the world.” Her fans went nuts and Lizzo’s tears returned.  It was a cool moment.

She took the time to point fan after fan after fan.  One teenage girl who was bald seemingly from the effects of chemotherapy was told by Lizzo that she was beautiful and that she loved her spirit.  I watched the girl after Lizzo had moved on and it kind of made me choke up to see how happy she was celebrating the moment with her friends.  I can only imagine the fight she is in, and it must have felt so amazing to have a bright spot in the midst of the rest.

Now don’t get me wrong, as much as I loved that moment of the night, it’s not lost on me how incredible this show ended.  We’re talking “Truth Hurts”.  We’re talking, “Good as Hell”.  We are talking about “Juice”!  Song after song went over better than the previous one.  And of course, we weren’t going to end the night without, “It’s About Damn Time”.  The audience knew it was coming and they were bursting at the seems to hear it. As soon as it began I could see people looking at each other telling one another to get ready.  In case you aren’t on TikTok, the middle break of this song has gone viral as countless TikTok folks have recorded themselves doing a choreographed dance to that part of the song.

So while people were dancing freely for the first half of the song, when the time came, everyone settled into position to do the dance for Lizzo. My only nitpick of the whole night is that Lizzo didn’t sing that part.  She let the audience do it.  I would have loved to have heard her sing as the thousands of fans did the dance.  That being said, it was quite the visual to see person after person, row after row doing the exact same moves.  What an incredible way to close out the night.

I really regret not seeing Lizzo back at The Union in 2019.  I do.  But I think I can move on somewhat after witnessing the Special Tour at Vivint Arena.  What a fun night of music, dancing, positivity, and Sasha Flute.