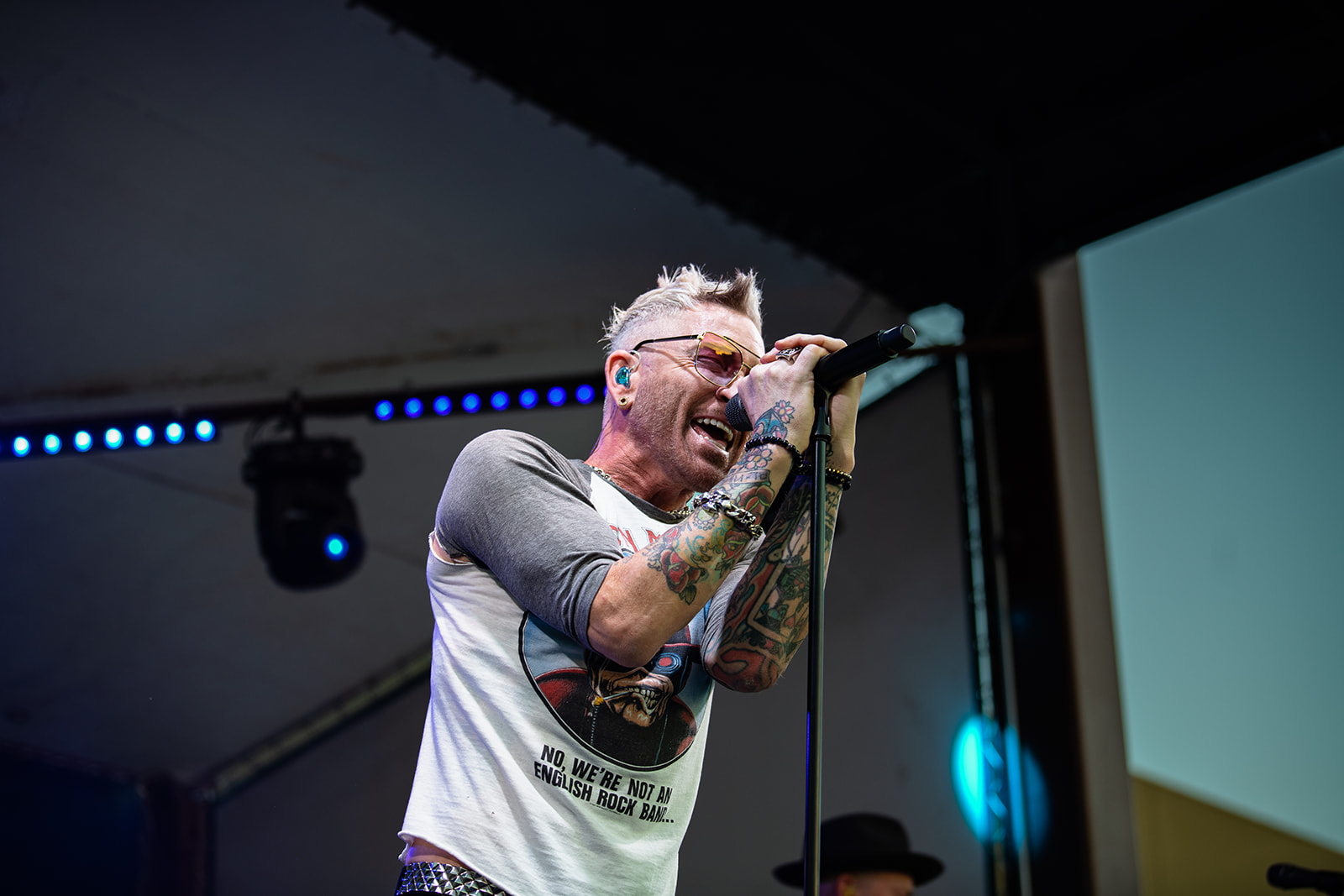 Hours before sunset, Daybreak residents started setting out blankets and lawn chairs at their neighborhood’s own SoDa Row concert venue. Friday, June 10th was the first night of the LiveDaybreak Summer Concert series. The summer concerts are exclusively for Daybreak residents and are just one of the many perks of living in their exciting community. LiveDaybreak decided to start their concert series strong, and on Friday night Southern California rock band, Lit performed a high-energy show to an excited audience of neighbors, families, and friends.

I grew up in Southern California listening to Lit and other similar punk, grunge, and rock bands that were popular at the time. I remember begging my mom to take me and my brothers to the 1999 Warped Tour where Lit performed with Blink-182, Less Than Jake, and many other talented bands. Unfortunately, I was unsuccessful in my attempts to convince my mom, and I missed out on Lit’s warped tour performance. 23 years later, I was excited about the opportunity to attend and photograph Lit’s concert. This time, I didn’t need my mom’s permission.

Opening the night was a local singer-songwriter, Alli Brown. Her set was a mix of covers and originals with country vibes. She started with a cover of “Leave The Pieces” by the country duo The Wreckers. She had a beautiful voice that carried over the entire crowd that was gathered on the lawn. A few kids came up closer to get a better view and ended up dancing along to a couple of her songs. The first original song she sang was called “My Own Superhero.” I enjoyed the strong lyrics and catchy chorus. I am not sure if she chose that song on purpose, or if it was just a fun coincidence, but I appreciated the irony of her singing “My Own Superhero” while opening for a band whose most popular song is “My Own Worst Enemy”.

Brown continued to entertain the crowd by playing more covers, including “I’m Yours” by Jason Mraz and Weezers’ “Island in the Sun.”Again I wondered if “Island in the Sun” was a possible nod to Lit’s popular album “A Place in the Sun,” but it could easily have just been a coincidence that I am looking too much into. Either way, I enjoyed every song she played, and I could tell the crowd was equally as impressed with the talented Alli Brown.

By the time Lit was set to perform, the crowd had nearly doubled. The lawn was packed! I noticed that some people who lived close enough chose to watch the show from their balconies or rooftops. Excited fans left their blankets and chairs to gather right up front as Lit stepped on stage. They opened with a song I had never heard before, “Kicked Off The Plane” from their upcoming album Tastes Like Gold. I enjoyed their new song, and I felt like it fit right in with their older songs.

Then the band brought the crowd back to 1999 with a couple of hits from their A Place in the Sun album.  Lead singer Ajay Popoff addressed the crowd of Daybreak residents, “Oh boy, Oh boy, somebody told us that South Jordan and Daybreak needed a rock band to come and wake them up for summertime!” I loved hearing the crowd sing along as they continued playing their old songs like “Over My Head”, “Ziplock” and “Quicksand.”

As I was walking around the concert I saw children sitting on their parent’s shoulders, and dogs sitting with their owners. I thought it was such a unique experience to see Lit perform in such an intimate setting. Halfway through their set, Ajay asked the crowd if there were any Cars fans in the audience. There may have been some confusion as the crowd cheered and one lady shouted out “Woo!! Life is a Highway”  as the band started to play a cover of “Let’s Go” by rock band The Cars. You can’t blame her for expecting a Rascal Flatts cover, after all, Lit did surprise us with a country album in 2017.

After listening to a couple of songs from their upcoming album, however, it’s safe to say they have returned to their original old-school sound. I was completely caught off guard when Ajay told the crowd that he and the other band members were Utes fans, then held up his hands in the Utah Utes hand sign. Ajay proudly announced that two of them had sons that attended the local University of Utah. The crowd responded with enthusiastic cheers and held their hands up with the same Utes sign in return. Any BYU Cougar fans in the crowd remained silent. They mentioned the Utes a couple more times before the night ended and even played under crimson red lights for a couple of their songs.

They asked how many people in the crowd watched them perform during the 2002 winter Olympics. From the response they received, it sounded like many of them may have attended Lit’s Olympic performance 20 years ago. They surprised the crowd with a cover of Tom Petty’s“American Girl,” while putting their twist on it. I have heard many covers of this classic song, but this was one of my favorites. They finished off the night with “Something to Someone,” followed by the one everyone was waiting for, “My Own Worst Enemy.” The audience released all the energy they had left during that last song, as many people jumped and sang along.

Even if you have no clue who Lit is, there’s still a very good chance you have the lyrics to “My Own Worst Enemy” stored safely somewhere in the back of your mind. At least that’s the case for almost anyone over 30. It was such a fun night to see Lit perform new and old songs. I was reminded of why I loved them so much, and I am now very excited about their upcoming album. “Tastes Like Gold” will be released next week on June 17th.

Lit was formed in Southern California in 1988 and its members consist of lead singer Ajay Popoff, Jeremy Popoff on lead guitar and vocals, Kevin Baldes on bass, and Taylor Carroll on Drums.

My Own Worst Enemy