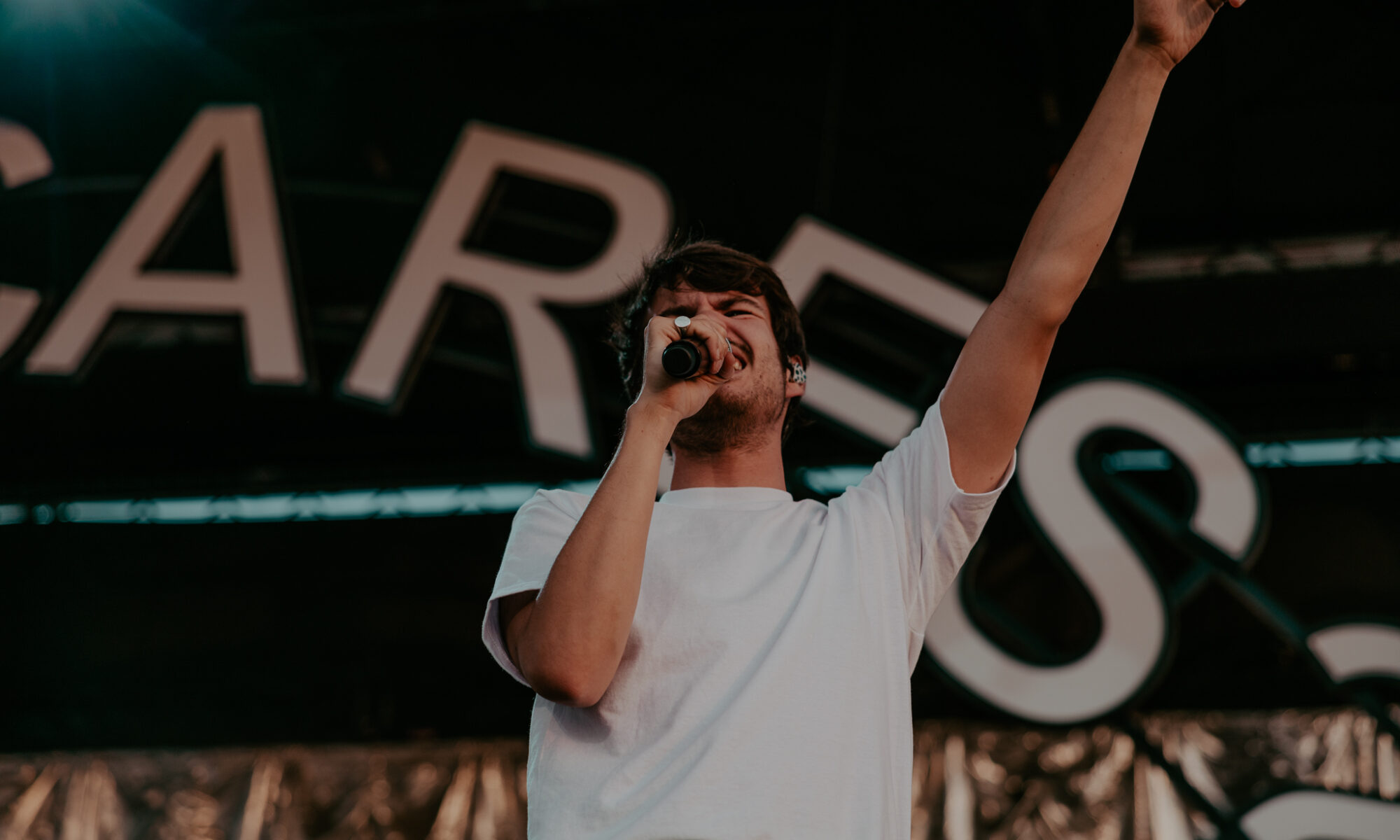 Midway through his Who Cares? Tour, British star Rex Orange County stopped in Utah, this time in Magna at The Great Saltair. Although he has visited Salt Lake in previous years, the turnout for this concert was more than he could have imagined. This was also my first time being to a show with no opening artist. Rex decided to come on the tour solo. Capitalizing on his popularity was not a bad idea in my opinion.

Selling out The Great Saltair, you could expect it to get pretty crazy. The line to get to the parking lot ended up miles onto the freeway, causing the overflow parking lots to be used. School buses were shuttling overflow parked fans to the venue. People may have thought they had made it through the worst part once they parked and made it to the venue. However, they were wrong. There was an even longer line outside the doors in the ninety degree heat. This may be the only part of the concert that wasn’t enjoyable. Once you made it through the doors it was an amazing experience.

The Saltair was a perfect venue for this event. I loved the outdoor setting on the Great Salt Lake. The sound quality outside was very impressive. I felt the bass all the way to the back of the grass area. There was plenty of water being handed out as well to make the experience as enjoyable as possible. The security at the front seemed very calm under the intense crowds. I did see a few people getting sick, however, it wasn’t as many as I would expect in such intense heat. The lighting from the venue after the sun had gone down was incredible. It perfectly fit the vibe of the music and atmosphere. Overall, I couldn’t see Rex performing at any other venue in the area. Hopefully, we see him in Vivint soon enough.

As 8:30 rolled around, Rex Orange County finally took the stage. The anticipation seemed to be stronger considering there was no opening act to break up the time. As he walked up the stairs to the stage, the side of the crowd caught a glimpse of him and erupted. That caused everyone to begin to scream and chant his name. As he entered the stage and made himself visible to the rest of the crowd, it got even louder. It was an electric atmosphere as he danced and sang his opening song, “MAKING TIME”.

Throughout his set, he had a lot of fan engagement and made sure to try to get as close to the crowd as possible on multiple occasions. He also was making gestures with fans to make sure they knew he saw them and appreciated them being there for him. It was cool to see an artist be so thankful for the opportunity to play a show.

The first of his many fan favorites that he played was “ONE IN A MILLION” off his new album. Not that the crowd didn’t know the words to his less popular tracks, but there were a few that created a special performance. Tossing the microphone in the air during the chorus and dancing around the stage, Rex was making the night a party for everyone in attendance.

Rex’s vocals were spot on with how his tracks sound. Having the opportunity to be within feet of the pit shooting photos, I could hear his actual vocals over the music and speakers a few times. It was crazy to realize that he actually sounds exactly like the songs I have listened to so many times. I was very impressed with both his talent and entertaining ability.

As the sun began to set, Rex played “Corduroy Dreams”. It was a magical experience hearing such an iconic song in such an amazing setting. The orange sunset over the salt flat plain as he sang on stage was truly a core memory in creation for many people there. After the song ended Rex even took a second to look out at the scenery and take in the moment. Once the sun was down the lights came on and created a new experience. Switching from daylight to night lighting was a huge benefit of performing at an outdoor venue like The Saltair.

At the end of his set, he played his most popular songs. During his album title track ‘WHO CARES?”, he released beach balls into the crowd and let them punch them around the venue. The lighting had all sorts of colors flashing as he performed. He then finished the show off with my personal favorite song of his, “Pluto Projector”. It is a beautiful song that many people dream of hearing live. It was not only one of the best songs of his set, but maybe one of the best I had ever heard live. I loved every second of it.

Overall, I would highly recommend you find Rex Orange County at a show near you. It was truly one of my favorite concerts I had ever been to. Although the venue helped bring out the best in his performance, I figure he could make most venues work out just fine. Check out his new album WHO CARES?, and get yourself a ticket to a show to see him perform it live!