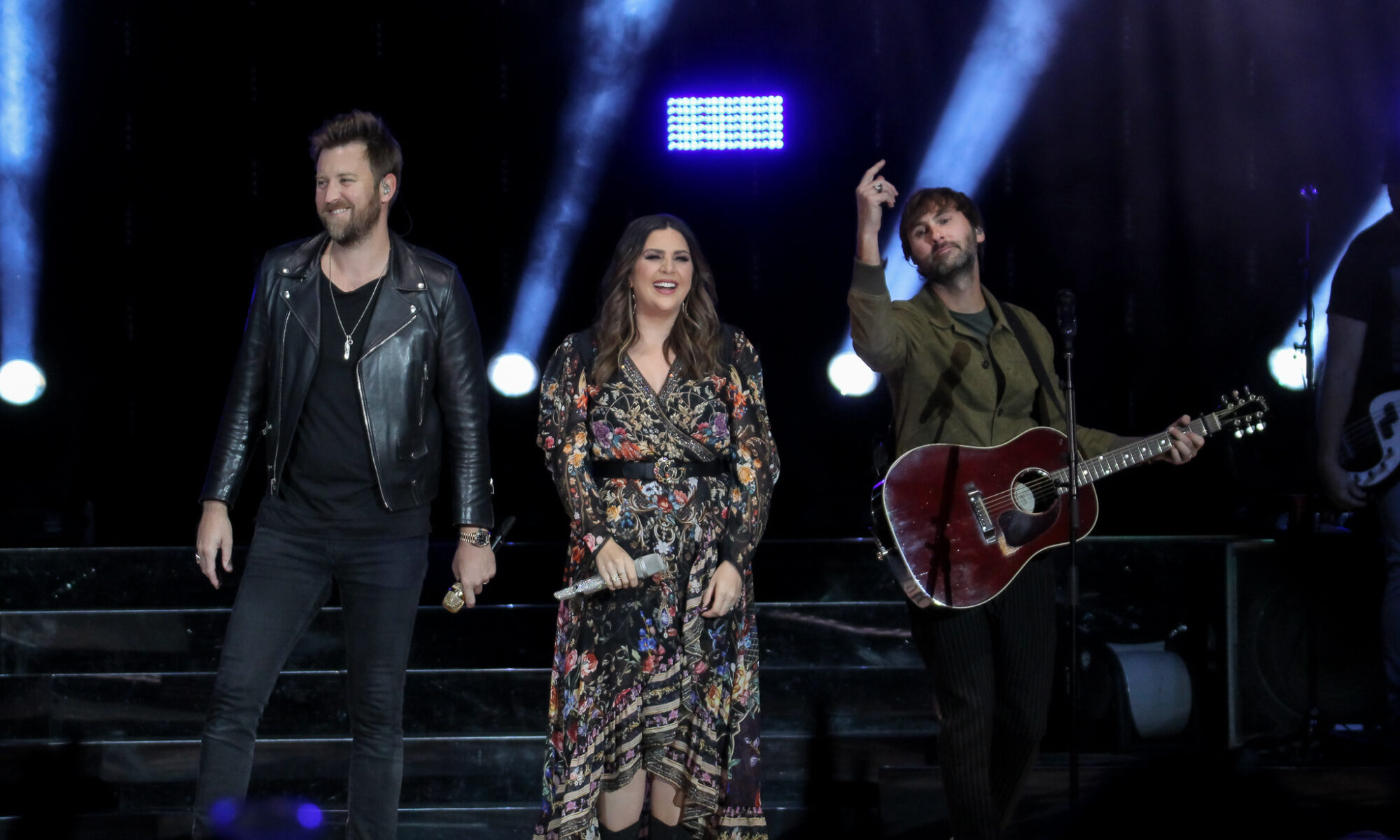 Country Music fans were treated to a night packed full of talent. I’d imagine most people headed to USANA Amphitheatre were intending to see Country megastars, Lady A. But the whole show was stacked from top to bottom. Most concerts will have one, maybe two support acts. This show had three talented artists opening for Lady A. Country fans definitely got their money’s worth with this show.

Lady A’s “What a Song Can Do” Tour included, Tenille Arts, Niko Moon, and Carly Pearce. Each artist at different points in their music career, but all combined to bring awesome support to a really enjoyable Friday night. I was unfortunately outside of USANA when Tenille Arts began her set. So I’m unable to give her a proper review. What I can say is I really hope she comes back to Utah so I can see her perform. What I heard as I was entering the venue was impressive. Her powerful voice flew up that large lawn and through the ticket line. She sounded so good from there. I can only imagine what it was like inside.

I was unfamiliar with Niko Moon coming into this show. I hadn’t heard his name or his music. So I thought. Moon has co-written quite a few hits for other country artists. Stars like Morgan Walen, Dierks Bently, Rascal Flatts, and Zac Brown. Ever heard of them? In the middle of his set, he actually performed a few condensed versions of some of these songs. The one that stood out most to me was “Homegrown” a song he co-wrote for the Zac Brown Band. It was fun to hear him perform these songs himself. He has a great voice and real talent. It’s good to see him out there performing himself instead of writing for others.

I’d say the highlight of Niko’s set was when he brought his wife on stage to sing to her. As Anna Moon walked from the side of the stage to center stage, the USANA Amphitheatre audience who was consistently filling in the seats and GA lawn cheered her on.

Niko sang to her, the Moon’s danced, and the audience ate it up. It was a fun moment to get a glips into the happy couple. Now, I figure they probably do this at just about every show. Regardless it’s a sweet moment for them, and a fun moment for the crowd. I’d say look out for Niko Moon. I think he’ll be a household name soon.

For most Country Music fans, Carly Pearce is a household name. She’s already been a past and current CMA nominee. An AMC nominee. And to top it all off, Pearce is a member of the Grand Ole Opry. Those are some solid credentials. I’d say she’s made her mark in Country Music.

Carly Pearce also left her mark here in Utah. I would imagine she can headline her own shows in this state and wouldn’t be surprised to see it happening in her next go-round. The audience took to her quickly. Pearce gained fans by the minute with her million-dollar smile and kind waves to people in the audience.

Pearce not only performed her hit songs like, “Hide the Wine” and “Every Little Thing”. But she also covered some iconic country jams like Shania Twain’s “Man! I Feel Like a Woman!” and Garth Brooks’ “Ain’t Goin’ Down Till The Sun Comes Up”. It should be no surprise that these songs were well received. Covering such well no songs can be risky, but Carly sounded great covering them and particularly with the Garth tune, really made it her own.

Carly Pearce finished her set strong with “Next Girl” and inviting Lady A’s own, Charles Kelley on stage to sing “I Hope You’re Happy Now” with her. That song was originally a hit for her with Lee Brice. It was really cool to see Kelley be willing to come out before his set and perform with Pearce.

My takeaway from Carly Pearce is she just loves what she’s doing. She told us that this is all she ever wanted to do. She seemed so thankful to be back out on the road, and on a stage. The bond she made with this Utah audience will not be breaking anytime soon.

“Give it up for live music on a Friday night!” exclaimed Charles Kelley. It was a perfect setting and the atmosphere was relaxed yet energetic for Lady A. People had finished their workweek and ready to kick back and listen to one of their favorite groups in concert. There was a feeling of goodwill and a hunger for relaxation. Lady A showed up right on time. Kelley also yelled out, “How about a hand for local Country Radio!”. You don’t get a radio station shout-out much these days. But I know Country Radio still has a lot of influence and listeners compared to some other stations.

The band all seemed in good spirits from the get go. Kelley, Hillary Scott, and Dave Haywood appeared at the top of the steps as they began their 2021 single, “Like a Lady”. They made their way down the stairs and spread out on the massive USANA Amphitheatre stage. The fans in the general admission pit up front waved and clapped as members of the trio acknowledged them. It felt good to be in a place where everyone seemed in a good mood.

After the band introduced each band member (one of them from Utah) by placing a rhinestone cowboy hat on their heads, they just rolled through a string of songs. Their harmony was always on point. That’s what they’re known for though, isn’t it? And I knew they’d be good at it. But as it’s been said many many times before, that’s why you see these bands live. To hear them do it on the spot. And Lady A performed these songs and these harmonies to perfection.

Hillary Scott told the audience, “There are so many American honeys here tonight.” The crowd erupted. That of course indicated that the band was going to play their #1 hit, “American Honey”. The voices from the amphitheater rang out, and the lights from everyone’s cell phones illuminated the sea of people. It was a beautiful sight.

There were some really fun moments in this concert. One, in particular, is when they rolled out a piano. Charles Kelley told us that when the piano comes out that means it’s business time. Then as the roadies put the piano in place he sang a snippet of “Business Time” from the comedy duo, Flight of the Concords. I couldn’t help but laugh. It’s such a funny song and seemed hilariously out of place at a Lady A concert. The fun didn’t stop there. After some prodding, Kelley then sang along with the piano a quick cover of Montel Jordan’s, “This Is How We Do It”.

Again, didn’t think I’d be hearing that at a Lady A concert, but here we were. The lyrics to begin the song are, “This is how we do it, it’s Friday night…” So therein lies the reason for the quick cover. Charles Kelley seemed concerned that he wouldn’t remember all the words, but I think he got them all right. The audience loved it, and it gave a little insight into how this band messes around with each other.

It was also really fun when Lady A invited openers, Tenille Arts, Niko Moon, and Carly Pearce back to the stage. They performed a medley of popular songs, “One Love” by Bob Marley, “Another Piece of My Heart” by Janice Joplin, “Levitating” by Dua Lipa, and “Shape of You” by Ed Sheeran.

The night picked up and never slowed down again beginning with, “Bartender”. People were up and moving. I don’t want the audience to sound like they were asleep. But I don’t think a Lady A is a concert where people go nuts. They sing, and they sway happily to beautiful harmony. People were having a blast. There just wasn’t crowd surfing or stage diving. But that would be weird to see at Lady A, right?

They followed “Bartender” with a song that had been in my head for weeks! For some reason, I could not think of who’s song it was. It even crossed my mind that this might be a Lady A song. But I never investigated. It’s foolish that I didn’t realize it was a Lady A song because it was their very first #1 song on Country Radio. The moment I heard the first chord to “I Run to You” I was elated. I’ve wanted to hear this song live for some time and it finally happened. I don’t know if the rest of the crowd had this song in their head recently, but they definitely embraced the performance.

I’ve watched the TV show, Songland a total of one time. And it so happened to be the episode that Lady A was on. The premise is a band chooses between three songs presented by three songwriters. They then record and release the song. If memory serves, I watched the show because Utah singer-songwriter, Ryan Innes was one of the songwriters on the show. I was hoping he would win, but it was clear when Lady A got ahold of “Champagne Night” it was going to be the winning song and a hit for them. Which it was. Their performance of that song was fun to watch because I had seen it from its inception.

The night ended with Lady A’s biggest hit, “Need You Now”. This song was not only was this #1 on Country Radio, but it was a huge hit worldwide peaking at #2 on the US Billboard chart. It wasn’t like the band wasn’t going to sing it. How could they not? And although it was no secret that this song would eventually be performed, the crowd still roared as if they had no idea if it would happen. Again, Lady A sounded so good. They’ve performed this song so many times. Like, so many times! But they performed it with all the emotion and precision that you hope they will. That’s the sign of a true pro.

The show was excellent. Just what I needed at the end of a long week. It was refreshing to hear live music performed so well. I’m pretty sure Lady A comes to Utah regularly. So if you’re a country fan, and you haven’t seen them, it might be a good idea next time they come to town!