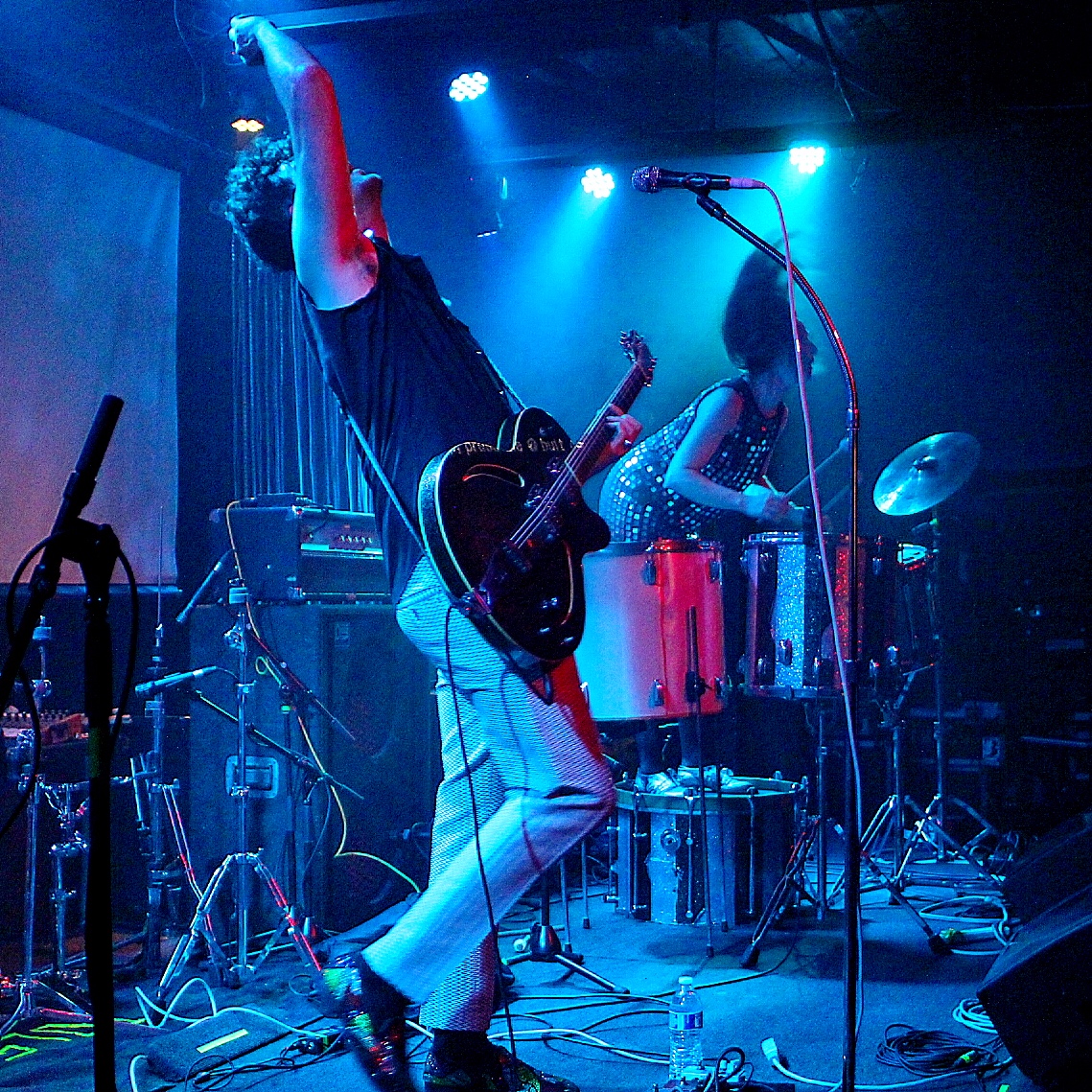 Exactly one year to the date of their last visit to Utah, KOLARS made their triumphant return to Salt Lake City.  The band performs yearly at the Treefort Festival in Boise, Idaho, so it makes perfect sense to stop and do a show here in town on their trek up north.  Last year they played Kilby Court on a rainy Thursday night. Both Lauren and Rob remembered our interview in their dressing room before the show as the rain pounded the roof of the tiny room.  This year KOLARS set up shop in The Urban Lounge.

As I walked into the sparsely filled Urban Lounge and I was really disappointed about how few people were in their.  I kept thinking, how can so few people be her to see this amazing band? KOLARS uport act, Alex Lilly showed great form by interacting with those in attendance and playing through her electronic set with charm and diligence.  Those on the floor appreciated her performance and applauded her between each song.

As Alex left the stage, KOLARS came out to set up their gear.  While that was happening, as if from nowhere, people filled the floor.  Were they outside smoking? Had they not arrived until now? Were they hiding out in the dark corners of Urban Lounge?  I honestly don’t know where they were, but the floor was filled by the time KOLARS left the stage as roadies and returned as performers.

KOLARS opened with one of my favorite tracks “King of Carrot Flowers”, a cover of Neutral Milk Hotel’s that they have made completely their own.  The packed floor immediately started moving. People were singing and dancing to the music, happy that the year long wait was over to see this band again.

If you’ve never listened KOLARS, here’s what you’ve been missing.  Take Johnny Cash and Eddie Cochran then mix it with early New Order/ Joy Division.  You take that musical cocktail and add in the visual aesthetics of their show and you have an amazing concert.  Lauren is the most unique drummer you’ll ever see. She stands on a kick drum and tap dances percussions while playing drums at the same time.  It’s a sight to behold and something I’m confident you won’t see anywhere else. Rob is an excellent vocalist and his guitar playing is infectious.  There is a groove to this band that keeps you wanting to dance even during the slower songs.

KOLARS mixed things up by bringing opener Alex Lilly on stage to join them for their fan favorite track “Dizzy”.  On the album this song does have a female voice in the chorus, or at least a high voice in the background. So with Alex joining in on the chorus of “Dizzy”, this performance had an element true to the original recording.  It was fun to see Alex interact with both Rob and Lauren. With only two members in KOLARS you’d think there wouldn’t be enough going on during the performance. But with Laurens percussions and Robs stagemenship there is plenty to see.  Now add Alex Lilly to the mix and the stage was electric!

The unfortunate part of this show was it went by way too fast!  I suppose that’s better than a show dragging on. And this show in no way dragged.  But KOLARS could definitely have played on and no one would have complained. Finishing their set with “One More Thrill” and “Dangerous” the band left the stage to a rousing ovation.  The audience was cheering, screaming, and practically for one more song. But with another band following them, there simply wasn’t time. Lauren even mouthed to fans directly in front of her, “I wish we could, but we can’t”.  An audience eager to hear more, but understanding of the time constraints cheered the band as they departed hopeful for their quick return to Utah.

After the show, while visiting Rob and Lauren I told them that I looked forward to the day that they come to town and play a big set, with encore all the frills that come with a major headlining tour.  They humbly smiled and thanked me. With cities like Los Angeles and Seattle selling out on this tour, I think they might just be on their way to giving us that encore.