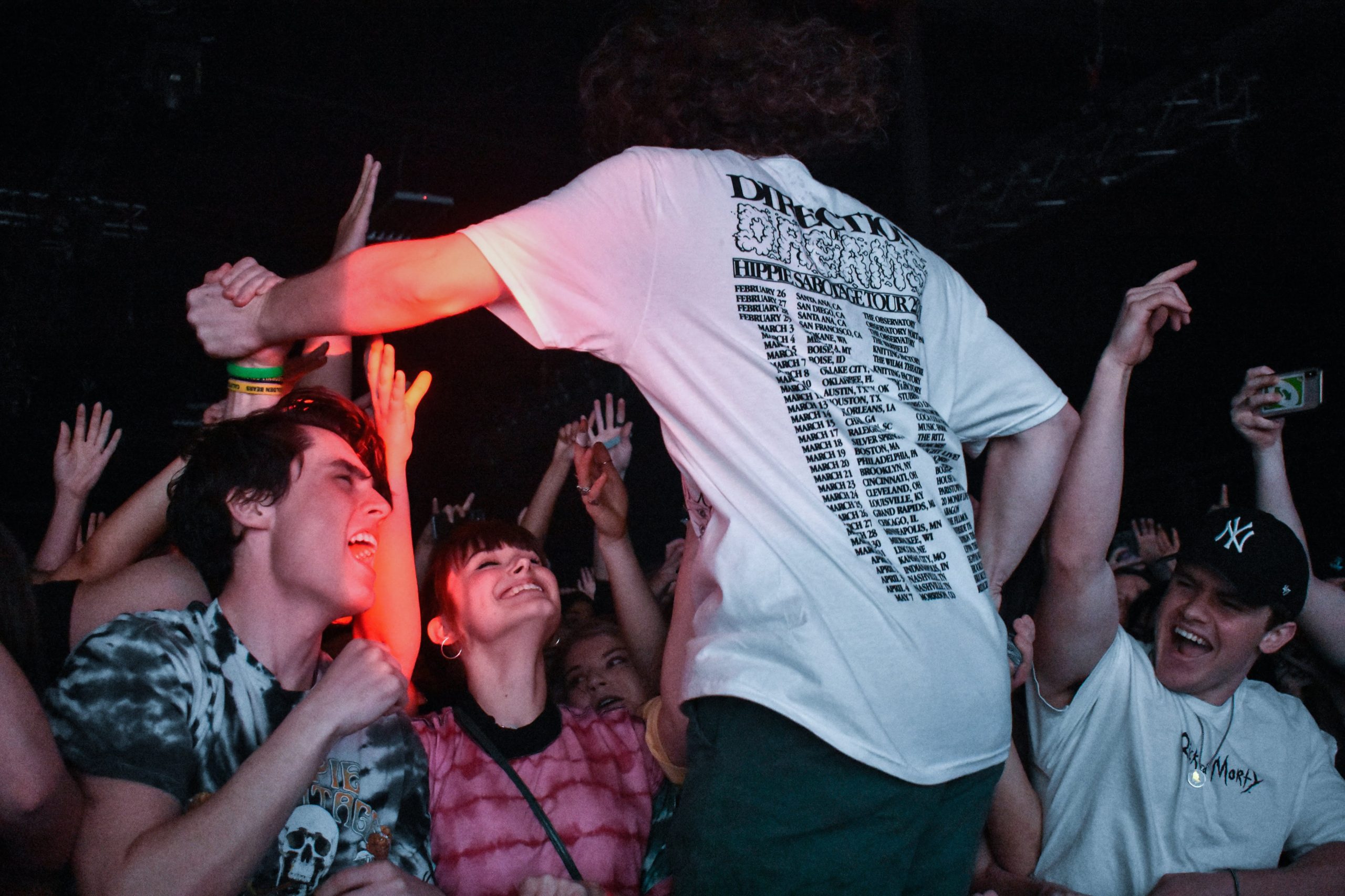 Marking their tenth stop on the Direction Of Dreams Tour, Hippie Sabotage took Salt Lake City by storm. Hippie Sabotage is an indie duo from Sacramento California, composed of brothers Kevin and Jeff Saurer. Stopping by Utah for the first time since last summer’s SLC Twilight, Hippie Sabotage put on one of the best concerts that I have ever been to. Fans were allowed into The Union at 7 PM, however, they started lining up long before then trying to secure their spot at the front of the barricade.

Although there was a mix up with my ticket, the staff at The Union were quick to fix the issue and let me inside the venue. The staff was extremely generous and directed me swiftly to the front of the barricade so that I could adjust the settings on my camera in time for Hippie Sabotage to go on stage. The Union Events Center had a huge stage where there was plenty of room for the artists to jump around, creating a more energetic atmosphere. There was also a 21+ area, for those looking to take the edge off. I was thoroughly impressed with the size of the pit and even more impressed to see that it was completely full of people.

It was upsetting that the openers, ilo ilo, microphones were turned down a little too low, but nonetheless they easily had the audience invested and jumping up and down to their music. I was unable to take photos of the opener due to the mixup with my ticket, but I was able to talk to one of the bandmates near the end of the concert. After introducing himself as Donny to me, we talked for a while and I easily came to the conclusion that he was one of the nicest artists I have had the chance of speaking to. It’s reassuring when the artist is as invested in their fans as the fans are in them, and in this situation, it’s evident that the band ilo ilo cares for their fans intensely.

You can stream ilo ilo on all streaming platforms or follow their social media
@iloilofeel.

Iloilo was a great opening act and really energized the venue, but when Hippie Sabotage came onto the stage, the crowd went insane. It was evident that they were all ecstatic to be there, and it was evident that Hippie Sabotage was ecstatic to be performing for them. During the first song, the crowd was already jumping, screaming and head whipping to the beat. Hippie’s visual hallucinations were some of the best visuals I have ever seen at a concert. The way that the lighting was done, went hand in hand with the mood for the night.

Paige Andra, a fellow coworker of mine, attended the show and when I asked her what she thought of it she responded, “I personally loved the concert. I absolutely loved the songs they played and how they made the song transitions flow together. Although I’m small and was constantly getting stepped on and squashed because of the college boys that were attending, it was an amazing experience and I would do it all over again.”

It was clear that Kevin Saurer cared and loved his fans. He came down to hug his fans multiple times, even going inside the pit without his security to fully interact with them. When he was high-fiving the audience, a 23 year-old fan exclaimed to me, “5 years dude! I waited 5 freaking years to see him perform. And the first time I did he shook my hand!” Saurer constantly handed out water to the audience and was very mindful of them making sure nobody was getting smashed into the barricade or passing out. During the last song of the show, he brought one lucky fan onto the stage to help throw shirts into the crowd with the band name. These are available for purchase on their official website. If you stuck around for the whole show, they came and took photos with their fans for free, and very little artists do that.

Not only was Hippie Sabotage extremely nice to their fans, their media staff was too. They were taking photos for the fans, and asking them about how their experience had been, thus far. Having the artist interact with the fans is amazing, but when their staff also interacts with the fans you know they truly value them. Upon meeting one of them, he offered to meet with me and give me photography tips along with teaching me how to shoot and edit film.

I think this was one of the most energetic, hype, craziest shows I’ve ever been to and I would enjoy seeing them again. Hippie Sabotage and ilo ilo exclaimed constantly that they loved Salt Lake City and the energy that the fans bring. And it’s easy to see why. The exchange of love, charisma, energy, and passion for music that they shared with their fans is impossible to not see.

You can download and stream Hippie Sabotage on all streaming platforms and buy pre rolls from their Instagram page @hippiesabotage.