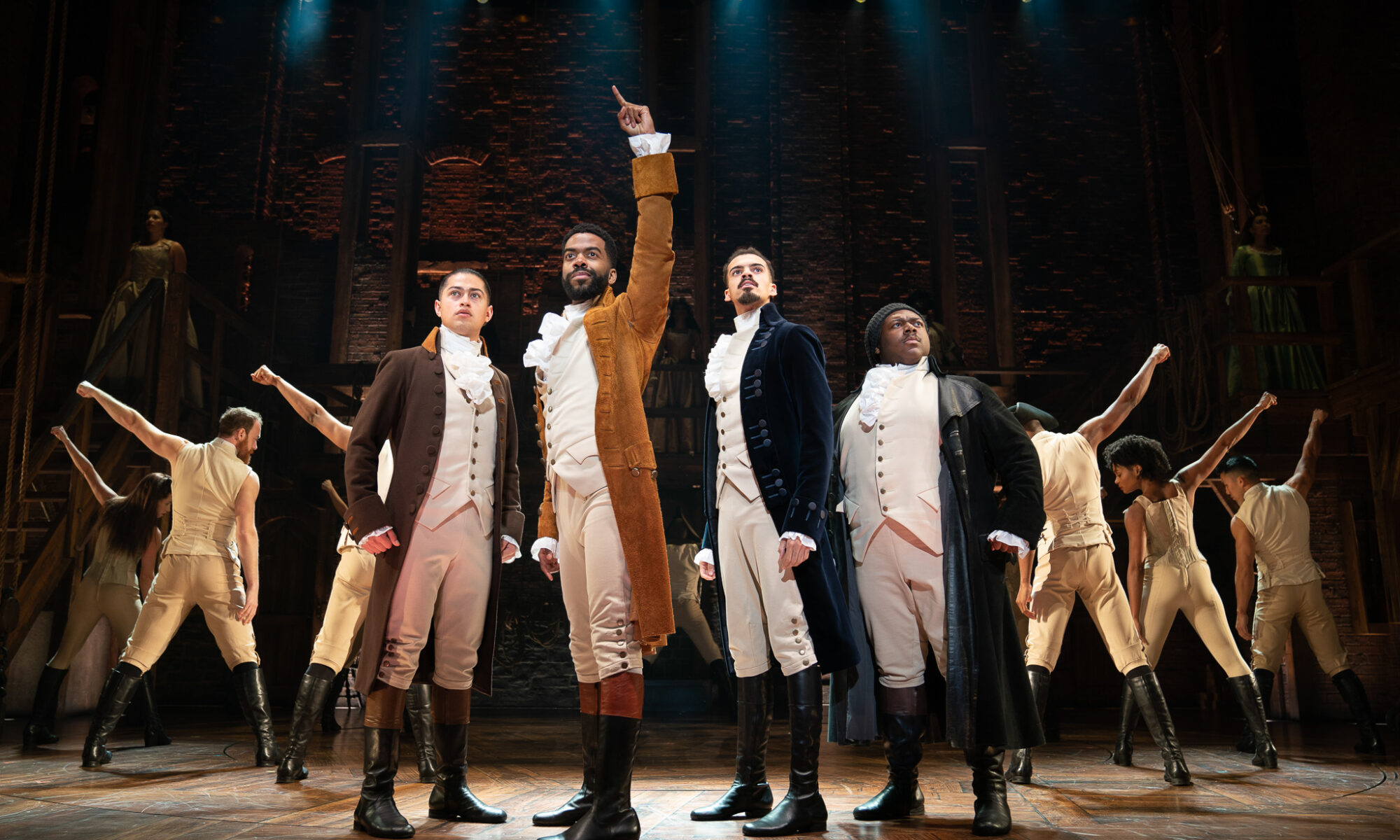 I sat at my computer looking at the blank document for a long time. I wondered what I could possibly say about this modern musical theater masterpiece.  Is there an angle or breakdown of Hamilton that hasn’t already been covered?  The more I thought about it, the more white and blank the document became.  The answer is most likely, no, there isn’t much to say about Hamilton that hasn’t been said over the last six or seven years. But what I can and will comment on is my experience with Hamilton, and my review of the cast I saw in the And Peggy Tour here in Salt Lake City at the Eccles Theater.  Wish me luck!

When it comes to Musical Theater I had adopted the policy of not listening to a cast recording until I had seen the show in person.  It worked well for me in the past.  I enjoyed going into a show fresh without knowing every word of every song.  I thought, you don’t go into a movie having read the script so why would I already know the songs of a musical going in.  Seems logical. I think?

However, Hamilton is one of the very few shows where I broke this rule.  I had to! I’m not breaking any news when I mention how totally massive this show was, is, and will be.  It’s everywhere. And rightfully so.  It became clear very quickly that it would be impossible to see this show in person so I broke down and listened to the cast recording.  Just like most people I was blown away by it all.

That being said, I did my best to avoid watching too much, listening too much, knowing too much.  It was important for me to have that fresh experience the first time I saw the show in person.  I still haven’t watched the filmed version on Disney+.  I’d love to.  I have wanted to ever since it came out!  And now that I’ve finally seen the production in person, I will most certainly be watching it.  So on December 29, 2021, I walked into the Delta Performance Hall at Eccles Theater and felt as fresh as anyone could be seeing a show this big that has been out for this long.

When the five-minute call was announced I started to think about this cast.  I wondered if they felt pressure to live up to expectations.  People love this show so much.  People have in their minds how the show is to be performed.  Does a cast worry about that?  Or do they trust in their interpretation of their character believing the audience will embrace it?  This would be the first live production of Hamilton Salt Lake City would see since the Disney+ filmed version was released.  So even if this was someone’s first time seeing the show, they have most likely watched the original cast on Disney+.  So I must admit I felt a little anxiety for the “And Peggy” cast.

As the lights dimmed, and the last few people scurried to their seats, the voice of King George gives the turn off your phone, and there’s no photography or video.  That was followed by, “The role of Aaron Burr will be played by, DeAundre’ Woods”.  Literally, seconds later, Woods walked out as the show began.  No pressure DeAundre’!  You were just announced and now you immediately have to set the tone for the show!  I enjoy seeing the understudy or even a swong.

It can be disappointing if you’re there to see a particular actor, but if you’re not familiar with the cast, then to me it doesn’t matter.  I’m excited to see them get that opportunity.  Woods started things off right, and if they had never announced him as the understudy, I would have never thought twice about it.  Knowing he was the understudy, I probably watched him under more of a microscope than I would have otherwise.  He was an excellent Burr and would not be surprised to hear that he’s been cast in the role full time in the future.

My eyes were glued to the stage.  Every movement, every facial expression was meant for some purpose in telling “the story of America then, told by America now.”  The show takes off like my favorite kind of concert, huge song after huge song, full of exploding energy until you finally get to where you need to take a breath.  And at the perfect time, that moment comes.

I went over a mental checklist of the cast as they were introduced. Ever hopeful that the audience would love them.  I know I didn’t want to be disappointed in anyone.  Julius Thomas III as Hamilton, check.  I was immediately impressed. And he continued to impress as the show went along. Marja Harmon as Angelica Schuyler, check. I was so caught up in her performance.  The way Harmon portrayed Anjelica almost had me believing they were one in the same. Paris Nix as Lafayette & Jefferson, check.  Both hilarious and imposing. It seems like he had the most words to deliver per second.  And he spit those rhymes amazingly.

Brandon Louis Armstrong as Mulligan & Madison, check.  Quite possibly my favorite in the cast.  Love his rap style.  So smooth but powerful.   Andy Tofa as Laurens & Phillip Hamilton, check.  Extremely versatile, and phenomenally skilled.  Then there’s Victoria Ann Scovens as Elize Schuyler Hamilton. Huge check! I felt every word, every emotion, every look.  Her voice is incredible. I just tried to soak it in every time she was on stage singing.  Her performance vocally in “Burn” was show-stopping.  Her acting in “It’s Quiet Uptown” was equally as impactful and worthy of note.

I guess I should have titled this section “The Georges”.  The roles of King George and George Washington have such a huge impact on this show.  I worried most for Rick Negron as King George.  The moment he walks on stage there is a buzz in the crowd.  Some are clearly anticipating laughing because King George’s “You’ll Be Back” and subsequent musical numbers are clearly the comedy relief in the show.  Again with those pesky anticipations of expectations from mega fans.  But for Negron, I’d imagine he doesn’t want to copy what’s been done. But also doesn’t want to go too far as to take away from the natural tone of the piece.  A tough position to be in, to say the least.  He gave a very straightforward performance that continued to build with each of his musical numbers.  He was vocally perfect and the applause grew with his performance.

Out of everyone in the cast, I’d have to say that Darnell Abraham was my favorite of the show.  He was perfectly cast as George Washington.  His stage presence commanding, his voice so powerful.  His rich resonant voice captivated me and embodied what I would have imagined the father of our country to be like.  He owned the stage whenever he was out there.

This entire cast was amazing and within five minutes it was easy to see we were in good hands.  They had great chemistry on stage.  I would imagine you’d have to with this type of show.

I loved the staging.  So simple yet so effective.  I felt as if it was a tip of the cap to another impactful musical, “Rent”.  In fact, I loved many of the subtle tributes to some of the great musicals.  The rotating stage, a tip of the cap to Les Miserables, or lyrics nodding to South Pacific, or H.M.S. Pinafore.  I’m sure there were other hidden Easter Egg tributes that I didn’t even notice.

The guy has received accolades and praise to last him two lifetimes, but the real winner of the night and every night that Hamilton is performed is Lin-Manuel Miranda.  How someone can come up with all of this music, all of these lyrics, with this subject matter is beyond me.  It’s a story that takes place in our nation’s infancy, yet there are themes that exist in our present day.  I’m blown away by all of it.  The beats, the ballads, the humor, the poignant moments, all of it. I feel beyond privileged to have been living when this show was introduced to the world. Let me rephrase.  How does it go? “Look around. Look Around. How lucky we are to be alive right now.”

Hamilton will run at Eccles Theater through January 23.  There are still some tickets available for select shows.  To purchase tickets click here.

You can also enter the Hamilton #HAM4HAM ticket lottery.  Download the Hamilton App and enter to win the chance to get tickets for only $10.