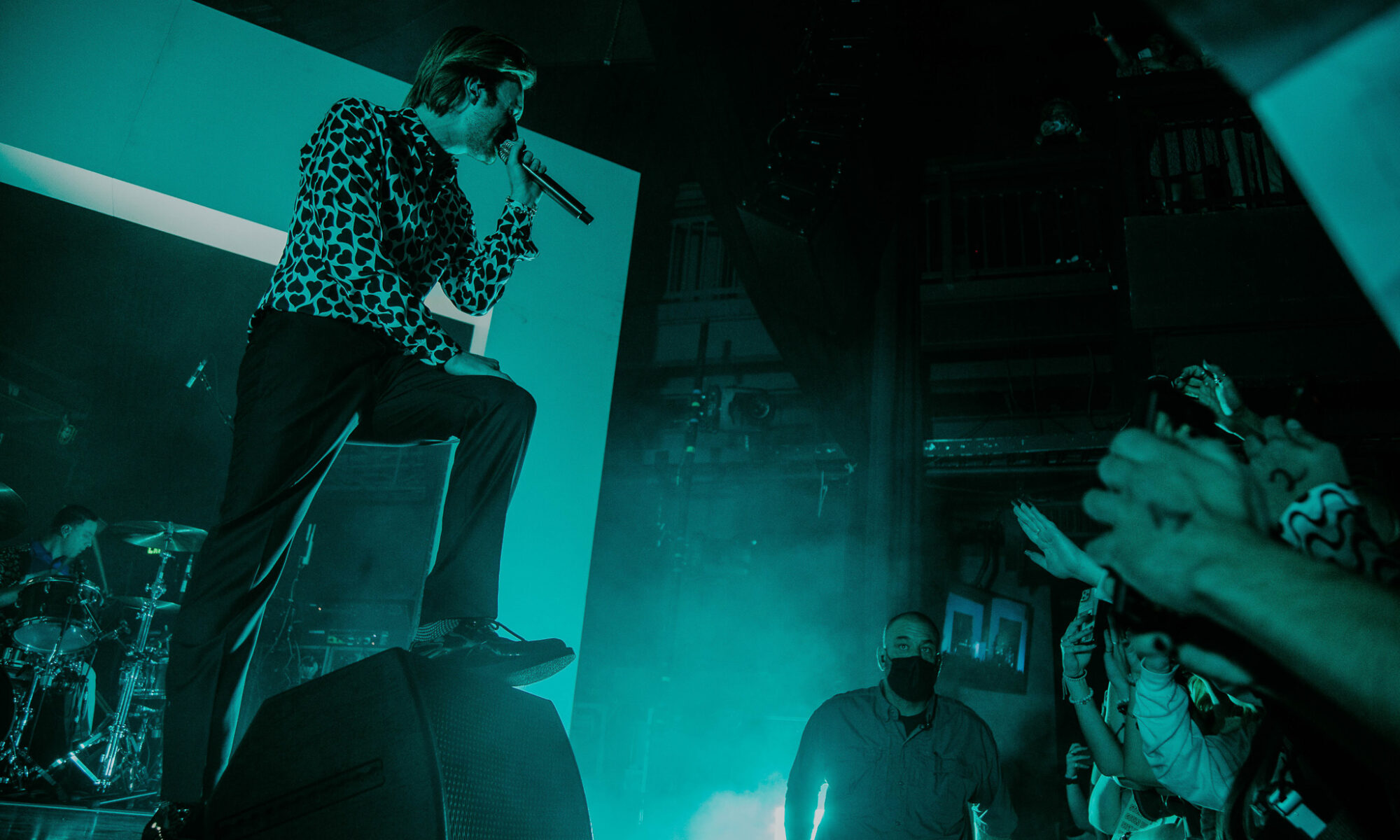 The Optimist Tour, one of the shortest tours I’ve ever had to wait on but somehow felt like the longest. Most people know of FINNEAS to be writing songs and playing shows with his sister, Billie Eilish. I remember when I saw  Billie Eilish when she was last in Utah and thinking, “one of these days we’re going to see FINNEAS go on a solo tour.”

The year has finally arrived. With the release of his latest album, Optimist was when he announced the tour. His stop in Utah was quickly sold out. I was excited to see him play one of my favorite venues here, The Depot. When I arrived, the line was wrapped around into the Gateway and everyone was buzzing with excitement. There were even fans who had been waiting in line all morning long completely dedicated to getting the best view at the barricade. Besides it being sold out I just knew it was going to be a night to remember.

We started off the show with Marinelli. There wasn’t a single dull moment through his entire set. He had a sarcastic type of personality, but it kept the entire crowd laughing and smiling. Everyone was shouting random things at him such as telling him that he was gorgeous, or they loved his sweater.

After the first song, they all asked for the microphone and guitar to be turned up and he quickly responded, “these guys want the sound up, I guess they know what’s up.” One fan even asked if he was single which he laughed and responded, “I’m unbelievably single it’s not even funny.” It was the type of interaction I see very often from smaller shows at smaller venues. But seeing a thousand fans give this much support and interaction and Marinelli giving it right back was so heartwarming to see that night.

While it was a really big stage, Marinelli owned every inch and it didn’t seem as big. He quickly stated how grateful he was to be on this tour with FINNEAS and how they’ve known each other since they were kids and they used to sing church songs together. Now they’re playing big sold out shows. While he made sarcastic jokes with the crowd, I enjoyed watching it all mostly because he had a constant smile on his face, You could just tell it was a very surreal moment for him. He was enjoying every minute of it including everyone at the railing he pointed out seeing their signs stating, “Marinelli Rocks” and everyone swaying and waving their hands to his songs and even making hearts with their hands.

As all artists do, he mentioned that it was his last song and everyone was sad and wanted him to stick around but he quickly stated back, “you guys are all here for FINNEAS not me.” It was an unreleased song however when he finished, he laughed and said, “Imagine how I said that was my last song, but REALLY this is it.”

The crowd cheered and he had one last request, “I’m going to say this, and you guys are going to shout, last song.” Usually with a request like that the crowd usually chants a statement at least three times. Only he had them do it once and before starting the song he made one last joke, “I have a strict no crowd work rule.” Marinelli was a true delight to see and it was nice to witness in person and up close all the support he received that night.

While we waited for the changeover and FINNEAS to take the stage, I had interaction with the fans.   They played a big part in why the night was so memorable. FINNEAS has some of the sweetest fans. They were making friends amongst each other and giving compliments to one another. They even sang the Phineas and Ferb theme song. Hoping that FINNEAS was going to hear wherever he was throughout the venue. I don’t typically get photos of the crowd because it’s very much out of my comfort zone. But I knew I had to since it was a night everyone was going to remember. We also got distracted for a moment when it was brought to our attention that Tan France, from Queer Eye, was up in the suites and the crowd went crazy for him.

Normally with a big artist like FINNEAS and a sold-out show, I’m always a little hesitant at first. I’m afraid there will be tons of noise and I wouldn’t be able to hear the artist as much. I shouldn’t have doubts like that at all. The crowd cheered on FINNEAS at all the dance moves and sang along but you could still hear FINNEAS perfectly. He told us that he knew perfectly well at the start of the day that Salt Lake was going to be a good show.

FINNEAS also knew it was the right place to be because of the food he had earlier. He took a moment to thank his bandmates on stage with him. FINNEAS also thanked Marinelli, also known as David, for opening up for him. He was happy that the two were getting to live their dreams of playing shows. A friendship like theirs with the continued support through all those years was so precious to see.

Leaving that night, I had deemed it one of the best sold out shows I had ever attended. FINNEAS puts on an incredible performance. He had a perfectly curated setlist. Filled with songs that went back in forth to ones that you can dance and groove to and all the slower ones with so much meaning behind them. It was amazing watching FINNEAS get lost in his music. It was in a way I had never seen before. I always knew he deserved to play a sold out show. Getting to see it happen with the biggest smile on his face was incredibly heartwarming.