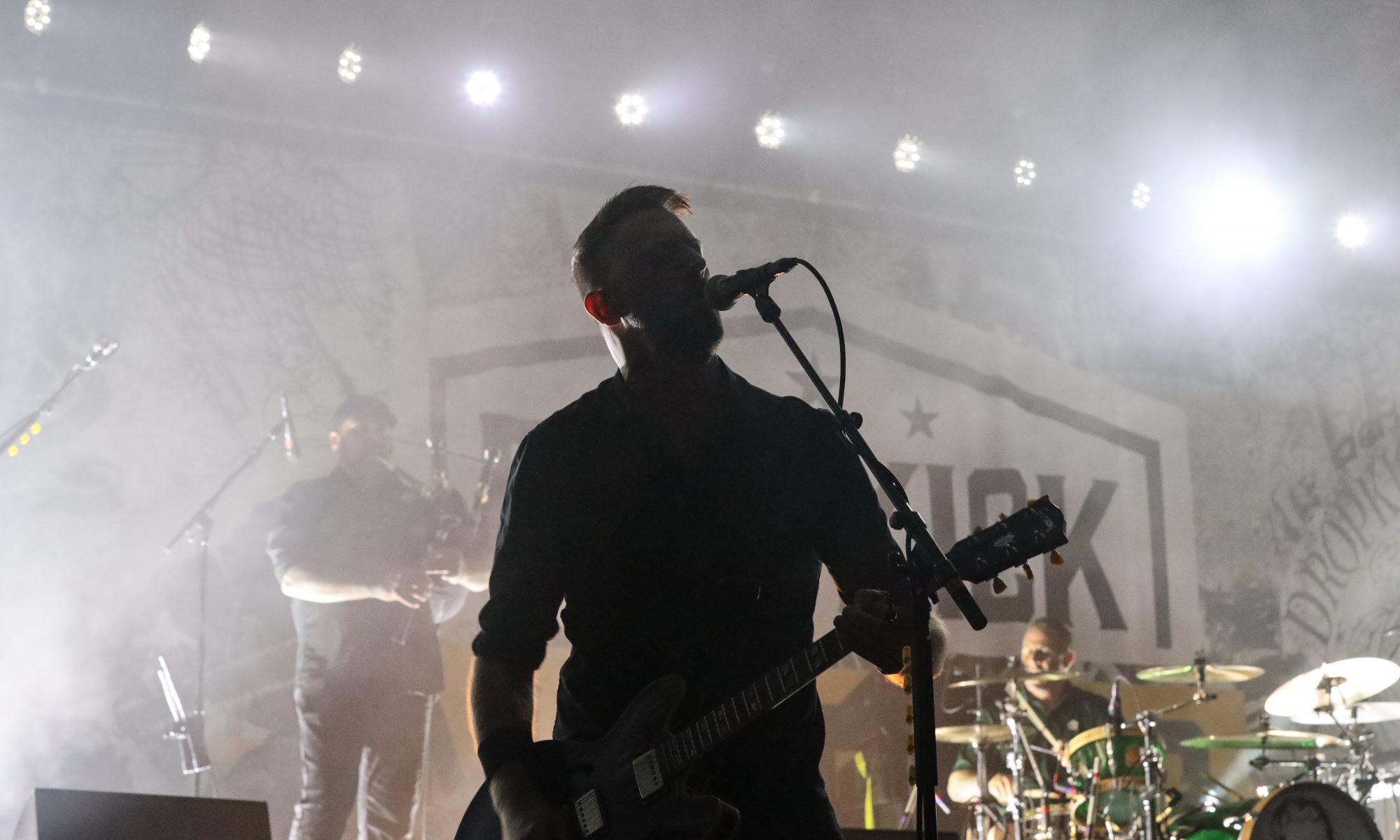 What a night. What a line-up. What a crowd! Not since Warped tour in 2005 have I witnessed such an amalgam of people and music lovers; hardcore fans, old school punkers and die-hard Irish circle mashers. This diverse crowd swamped the bar lines around the dimly lit ambiance of The Union Event Center’s balcony; a tour de force of a show about to take place and I have a front of house pass to the hammering guitar riffs and spitting vocals of Wayne Lozniak, and Jamey Jasta of Hatebreed; the jamming smooth bass lines and pure American gravel that come with the classic rockers in Clutch and last but not to be left “tossed a lily,” the prolific Irish ensemble that is ever pervading, consuming and inclusive: Dropkick Murphys. The energy and palpitation flowing around the throngs of mid-generation butt-rockers was nothing short of soul shaking. If I could flashback to 2010: the last time I witnessed The Dropkick Murphys in concert. What a day of hardcore and death metal enormity that my then developing psyche just could not comprehend. This show had much of the same feeling and overpowering hunger for a sense of comradery and community. Everyone there had been listening to the same punky and essential hardcore ballads for years, letting it combat the inevitable yuppie growing within all of us; here they are, ready to melt faces and transport all of us right back into 1997.

We opened up with Amigo the Devil, one man, one guitar, one banjo. Danny K. is that one man and I found myself captivated and touched by his songwriting and his ability to hold the attention and bring together this eager crowd. His songs approached very real and hard to broach issues such as depression in a very amiable way that felt true and heartfelt which was the most refreshing way to open.

Hatebreed and Clutch were sensational, bringing everything I was hoping they are known for. Jamey of Hatebreed riled the crowd into a quite impressive mosh pit, screaming “destroy everything!” promising to donate to everyone’s Go Fund Me page for new knees, while paving the way for Clutch’s classic American shredding style. Tim Sult on lead guitar for Clutch brings an original take on classic American rock. I wanted nothing more than to find the nearest hard tail pan head motorcycle and shred some tires down route 66 singing, ‘bang, bang, bang…vamanos, vamanos!’ Dan Manes’ thumping bass lines were as classic as I remember listening from the bed of my uncle’s Ford F-150 as Neil’s voice urged something primal inside of me, and it was having such an effect on every patron there within The Union. However, all this power and liveliness was only just spilling over for the one reason we all came out this cool October evening.

The entire stage is cleared for a large platform, atop which would sit Matt Kelly; an array of microphones were set to the front of the stage as well as a treasure chest of percussion instruments are placed at various points along the stage. The Dropkicks opened up with an overture of “Cadence to Arms”, setting the tone. Then immediately bursting onto the stage with “The Boys are Back”, Al Barr coming up over the partition inciting the crowd into an absolute frenzy. They continued up the set with some songs off their new album: 11 Short Stories of Pain and Glory; Blood, First Class Loser, then closing out the night with the classics: “Johnny, I Hardly Knew Ya” and “Caught in a Jar”. The circle mosh soon ensued, engrossing even myself. Grinning and cavorting around with the sound of bagpipes and bodhran in my ears is nothing of a once in a lifetime experience. I have never seen anyone connect and play an audience more so than Mr. Al Barr. Reading and playing a crowd is a lot like approaching a wild animal, you must be assertive, alert and yet receptive as to ensure your subject not turn on you; Dropkick Murphys do this with a seamless delight that makes for a one of a kind experience. A night of revelry and immersion within the music we all know and to which have bled and broken things. I can’t believe I let ten years go by without seeing this amazing group, I will be sure to never let such time lapse before I revel with them once more.