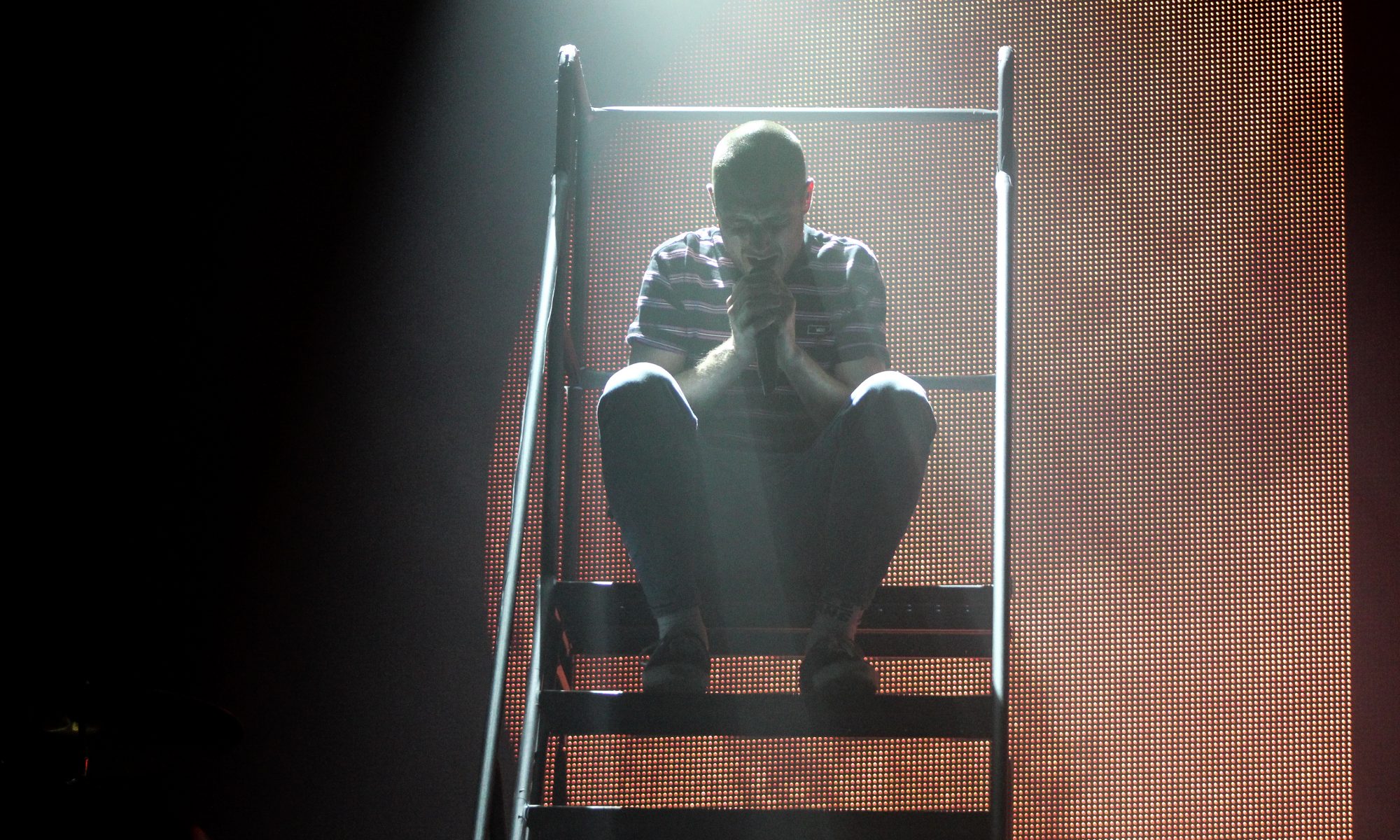 Have you ever seen Bastille live before? I’ve seen them one other time when they played at the UCCU Center on the campus of Utah Valley University. After that Utah County concert, I knew Bastille was a band I would always enjoy seeing live when they came to Utah. The combination of hearing their melodic indie pop style live and the energy of the band make the Bastille live show one to never miss.

The band took the stage a little earlier than the set time I was told so I was hanging in the back of The Complex when the lights went out. As I rushed my way to the photo pit in front of the stage I could see just how excited everyone was. People of all ages could not wait for Bastille to appear. I usually don’t get this perspective because I’m already in the pit ready for the show to start. People were rushing inside from smoking and hurrying back to their spot from buying a drink. Everyone was smiling and running. They could not be more excited that this show was beginning.

The show was broken up into three acts. Act 1 began with “Quarter Past Midnight” from Bastille’s latest album Doom Days. The crowd was especially excited early on when the band played “Things We Lost in the Fire” from their most successful album, Bad Blood. I thought Bastille did an excellent job mixing in songs from their new album with their hit songs and crowd favorites. They also added a few surprises by bringing the opening band Joywave back on stage a couple of times. The first with frontman Daniel Armbruster to sing “Bad Decisions” with Bastille frontman Dan Smith. It was fun to watch them interact. It looks like their having a blast touring together. I always want to think that the bands on tour together are friends and enjoy each other, but I’m sure that’s not always the case. It seemed to be true with Joywave and Bastille.

I’m not sure if it’s because this was a Saturday night show or if people are just huge Bastille fans, but this crowd was pretty crazy. They were calling out to Dan Smith whenever he was introducing a song, throwing out their own suggestions. Smith even joked at one point, “I guess this has turned into a request show.” These fans knew what the song was on the first beat or note. The sang and danced so hard that it began to get extremely hot inside The Complex on what was a pretty chili night outside. Security even started giving people in the front water and spraying water bottles into the crowd. The enormous fan spinning above us wasn’t doing enough and I think the venue eventually turned the air on. That’s how ballistic this audience was. Keyboardist, Kyle Simmons shared with the audience, “We always get asked what’s our favorite place to play here in the States. We have to say here!” This, of course, delighted the audience and caused them to rise to an even higher level. It was as if they wanted to prove to the band they were worthy of the praise.

I think Dan Smith is a major reason Bastille shows are as entertaining as they are. He puts everything he has into the concert. He tells stories of what the songs mean, he tells the audience how happy the band is to be back, he jumps, he dances, he drums, and he sings flawlessly despite never stopping. There was a point in the show where Smith came down off of the stage and moved his way along the floor inside the photo pit singing, high fiving, and hugging the people in the front. Then he made his way into the heart of the crowd. He is pretty brave! Despite having a couple of security guards at his side, the audience totally surrounded him just trying to get a closer look or perhaps an embrace. Smith moved swiftly to keep the current flowing so he wouldn’t get stuck in the mob. His journey took him all the way to the back of the venue and around to the side where the VIP section was located. He used the elevated section as an additional stage and continued to sing. When the song was over he ducked behind a curtain and reemerged onto the stage to deafening applause. He brings the energy to the show and then once the audience begins to feel it and reciprocate he feeds off of it.

As the show moved along things got a little weird. As I mentioned, the audience was rabid. So much so that one fan thought it would be fun to jump up on stage twirll his shirt above his head and stage dive back into the audience. The only problem was the people in that area weren’t feeling it. Think School of Rock starring Jack Black. Remember what happened to him at the beginning of the movie when he tried to stage dive? Well, that’s what happened. No one caught the guy and he smacked down right on the ground. I was not near this section so I couldn’t really see what was going on. I noticed the flashlights of security trying to find him and as the guy tried to make his way through the audience fingers pointed him out along the way. I found out afterward that security was able to locate him and handle things. Things just kind of froze for about five minutes. Dan Smith had a look of “What just happened?” on his face. I’m not sure if someone was injured during the stage dive because Smith stated that he didn’t want to start the next song because there would be jumping around and he didn’t want that to happen while someone was getting medical attention.

As things began to look ok, the concert was able to resume. Smith told the audience to pretend they left the stage and that they were back for their encore. Bastille then began “Of the Night” the mash-up of 90s Eurodance songs “Rhythm is a Dancer” and “Rhythm of the Night”. Dan Smith was not wrong, the entire place including him jumped up and down throughout the chorus of the songs.

Joywave was invited back on stage to help Bastille finish the show off with the huge hit, “Pompeii”. This is just one of those songs that will always be fun live. No matter what happens to Bastille throughout the rest of their career they will always have this song. Don’t get me wrong, they have a lot of really good songs. But “Pompeii” is the time of song that will transcend generations. People will be listening and dancing to it for a long time. I didn’t think The Complex could be more alive than it had been all night, but this audience had more to give. Having Joywave on stage during this song was fun. Both bands got so into it. I’m sure Bastille has sung this song so many times since it’s 2013 debut. I’m sure there are times they think they’ll be tired of playing it. But when a crowd reacts to a song you’ve done the way they do, I can’t imagine it ever growing old.

Bastille is one of those bands that should be seen live to be truly appreciated. Their albums are solid, yes, but hearing those songs played live bring them to a totally different level. If you get the chance see Bastille in concert.