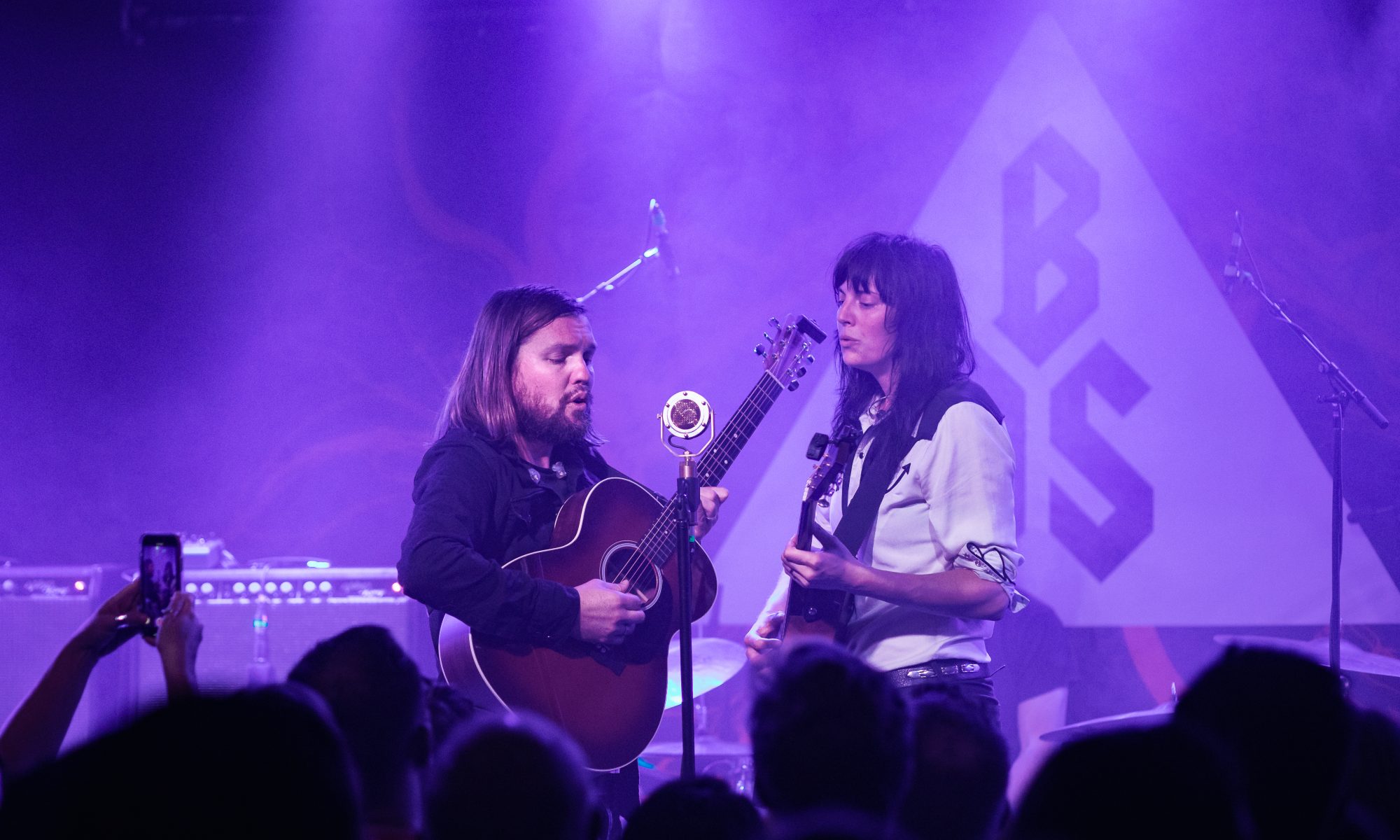 Working up the room with the intense “You’re Not Pretty But You Got It Goin’ On,” which included a shredding guitar tangent and a violent drum conclusion, Marsden told the crowd “that’s the rock and roll thing, now we’re gonna dance,” moving into “Himalayan” and “Bruises.” Richardson’s vocals intertwined perfectly with Marsden’s, hers echoing throughout the set often to be replaced by his Jazzmaster. The band—who already delivered a sound more immense than you would expect from a three-piece group—were often joined by the audience, who sang along passionately to the opening lyrics of “Fires,” from which 2009’s Baby Darling Doll Face Honey pulls its title.

Band Of Skull’s setlist was comprised largely by the decade-old album. After playing “That’s My Trouble” Dorio again rocked the cymbals dramatically before Marsden’s guitar drove into “Patterns.” With the first few lyrics, Richardson echoed Ann Wilson as she worked the bass, crucial to the headbanging that was going on within the crowd. A moment of buildup between her bass and Marsden’s residual electricity during the song was sped up by Dorio and had everyone on edge for what turned into a heavy-metalesque conclusion that led into “Blood.” “Blood” featured an off-kilter beat and a shrieking reverberating guitar that was dominated vocally by Richardson, resembling something from The Pack a.d. Marsden contributed to the song by playing his guitar above the heads of the audience, riling them up appropriately before slowing down the set with “Cold Fame.” As the song ended with a crescendo provided by Dorio, Marsden and Richardson donned acoustics and told the crowd they were going to do something a little different.

With a single old-fashioned mic at the center of the stage, the room quieted down to allow Richardson and Marsden to serenade the space with a fully acoustic version of Sweet Sour’s “Hometowns.” Dorio returned for “Honest,” after which the applause went on almost as long as the song itself. With two slower songs out of the way, the band turned the electricity back on and transitioned to “Sweet Sour.” While Marsden made his guitar sing and Richardson made the walls vibrate, the crowd whistled and accompanied the band by proclaiming the words of the track’s chorus.

The group followed up “Sweet Sour” with “Bomb,” which Marsden referred to as the “rarest” song of the set, and “The Devil Takes Care of His Own,” which proved southern rock by way of Southampton is serious business. A sound similar to Wolfmother’s “Joker And The Thief” made an appearance with “Hoochie Coochie” before Band Of Skulls moved to their final songs. After Marsden told concertgoers they’d be back soon, Richardson began the unmistakable rhythm of “I Know What I Am,” to which the audience responded with howls, some fans clapping along and others shaking a fist in the air to the beat. The third and final song of the set from 2014’s Himalayan was “Asleep at the Wheel,” taking the crowd on a sonic journey that left the venue in some state of shock, emphasized by a guitar loop pulse that hung in the air as the group left the stage. Despite Salt Lake being the eighteenth show of their run, the band enthusiastically returned for an encore, satisfying a crowd that had chanted for one more song with “Light of the Morning.” The choice of finale was a deliberate one—the group teased the audience by playing just a few introductory seconds at a time, departing from the studio version and leaving those present waiting in antici…pation before breaking down and moving into the rest of the song, which included some more guitar/audience interaction. The set was brought full circle when the band sequentially covered “Death By Diamonds And Pearls.” It was clear that the audience was still eager for more, though the band had played nearly twenty songs. With an entire album that the setlist hadn’t touched, one can imagine Band Of Skulls might be back, no doubt bringing the same power of rock and roll they delivered on this night…the kind of power that would leave even 007 himself shaken and stirred.