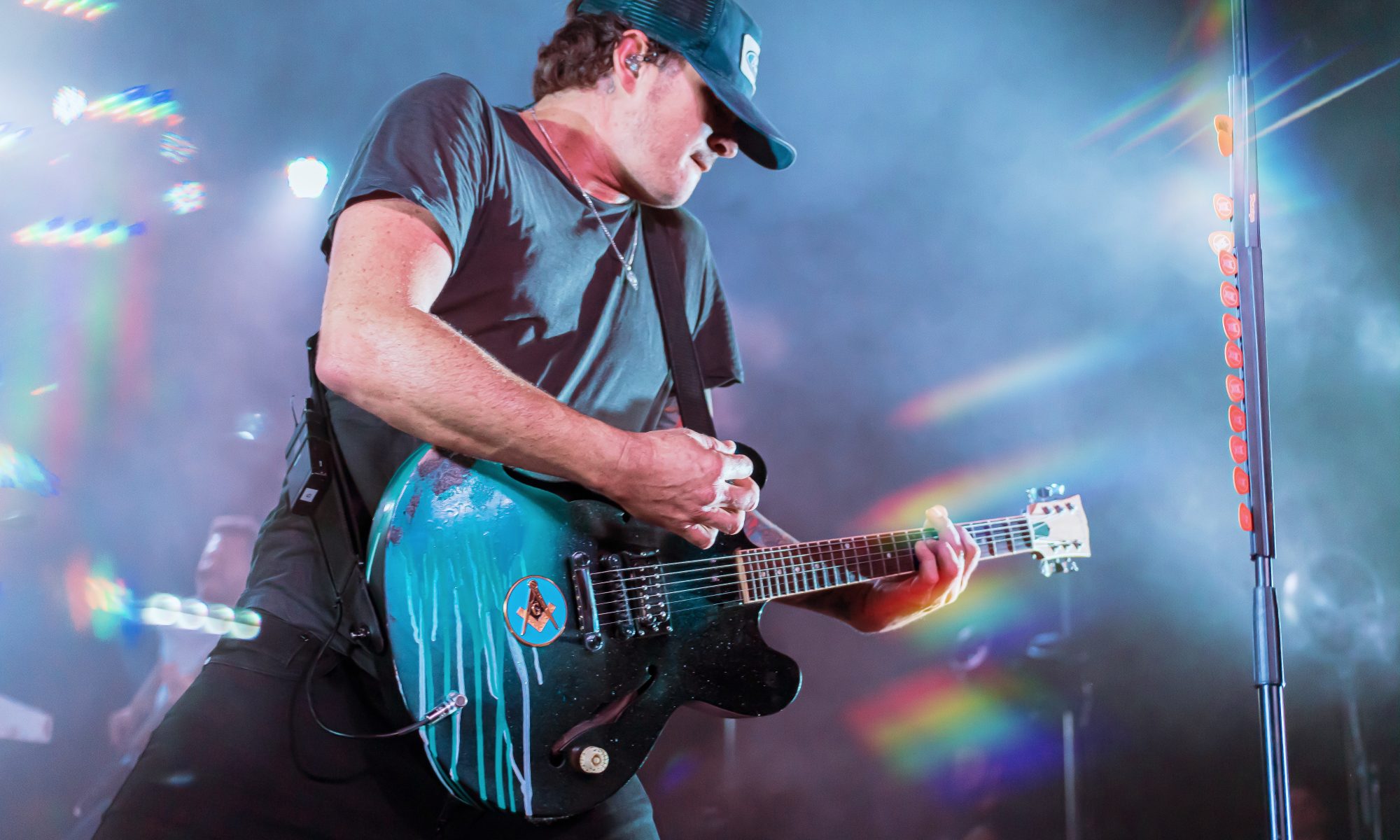 I don’t think there are words that could truly describe how incredible yesterday was, not only for myself but for thousands of Angels & Airwaves/Blink-182/Boxcar Racer/Tom DeLonge fans that attended the AVA show in Salt Lake City. However, SLC fans were treated with a special, intimate acoustic AVA set, earlier that day at Club 50 West, hosted by Utah’s favorite alternative radio station, X96. Space was limited so fans, including myself, lined up hours early to make sure we snagged a spot. I stood in line for about 3 hours. The first 50 people in line also got wristbands that allowed us to get a photo with Mr. Tom DeLonge and the rest of AVA after the acoustic set. I was bursting with excitement I almost couldn’t contain it. Angels and Airwaves and Tom himself have been a major part of my life since my pre-teens. And even to this day, at 23 years old, AVA’s music inspires me, fills me with hope and has gotten me through some of the hardest times in my life. I listen to AVA when I’m happy, when I’m sad, when I’m hurting, and when I’m rocking out with friends in the car. They hold a special place in my heart.

When AVA came out onto the small stage for the acoustic show, everyone cheered so loud! It was surreal, seeing one of your musical idols in the flesh, so close and personal. I was grinning the whole time. They performed “Do it for me Now,” first, which tugged at my heartstrings, because that is my all-time favorite AVA song. Next was “Rebel Girl”, which was AVA’s first single when they announced they were hitting the road again along with working on a new album after seven years. They ended the acoustic set with “Anomaly”. After the mini-performance, there was a small Q&A. Tom talked about his endeavors with To The Stars Academy, working on the new album, and just cracked dad jokes with the audience. It was amazing. Then we were able to take photos with the band. It all happened so fast but it was one of the greatest moments for me. I shook his hand and told him I was photographing the concert tonight and he told me, “make sure you make us look cool!” So Tom, I hope I did!

The Angels & Airwaves show was held at The Union Event Center. I have never been there before so I didn’t know what to expect. To my surprise, the venue was beautiful! It was large and spacious, there was a large balcony that was 21 and over that had a great view of the stage and crowd. They even had an outdoor balcony where people relaxed in between performances. Lots of food and drink options and great lighting. For a minute there was a little bit of an audio problem but it got resolved fairly quick.

Being at an Angels & Airwaves show is so dreamlike. From the ambient sounds to the technicolor lights and good vibrations, it is like being in another world. Concerts are always an escape from our everyday lives, but this show was special. Tom explained how at concerts we are all on the same frequency, along with the music, and that connects us and brings us together, which is why concerts are such a magical experience. The moment they walked on stage, I looked out into the crowd from the photo pit and saw nothing but giant smiles. Personally, I never thought I’d ever get to hear AVA live, a lot of other people thought the same, I mean it’s been seven years, but yet here we are; new music and all. They performed “Surrender” to kick off the night. The crowd was so loud and the energy never died down.

Later in the set, Tom took the stage alone and played some acoustic songs as he shared some stories with the crowd. To our surprise, he started singing some of his famous Blink-182 and Boxcar Racer songs. He sang parts of songs to “Alien’s Exist”, “There Is” and the iconic “I Miss You”. Fans were losing it. When he started singing “Aliens Exist” a guy behind me started jumping up and down screaming, “No way! No way!” The smile on his face was priceless. During “I Miss You”, Tom had the crowd sing solo on parts and let me just say, it was absolutely beautiful. It was unreal! That song resonated with millions of people throughout all these years, and to hear Tom sing it live in 2019 was something that was extremely special.

The nice thing about AVA is that the show feels so personal. Tom does an amazing job at interacting with the crowd, telling jokes and stories and you can just see how much fun he’s having while he’s performing! It is refreshing, especially since he hasn’t been on a tour for so long, it’s like he was gone and came back better than before. He’s so happy up there, dancing around and rocking out on his guitar. He also doesn’t hold back his inspiring words. He got so passionate about letting us know that we can do anything we want, we have the ability to dream big and to never give up. He pointed out a dad towards the front of the crowd, who had his son sitting on his shoulders. Tom said, “God, look at him! He’s gotta be 6 or 7 years old and he can do anything he wants! Be anything he wants!” It really inspired me and others around me. They ended their set with “Do It For Me Now” and “Heaven”. As I said earlier, DIFMN is my favorite AVA song, and as they performed it, with so much energy and passion, I started crying. I cried so hard as I was singing along so loud because that song is so important to me for various reasons. When they finished their last song, the crowd went wild. The roars and cheers were so loud and so insane, Tom couldn’t believe it. I got a video of him being so blown away by the crowd’s reaction. You can see him mouthing wow and pointing at different areas of the crowd saying thank you, over and over again. At one point he put his hand over his heart and just shook his head. The world loves you AVA. Salt Lake City loves you, and we can’t wait for you to come back with a new album.

Moon as My Witness

Kiss With a Spell

I Miss You? There Is/ Aliens Exist

Do It For Me Now