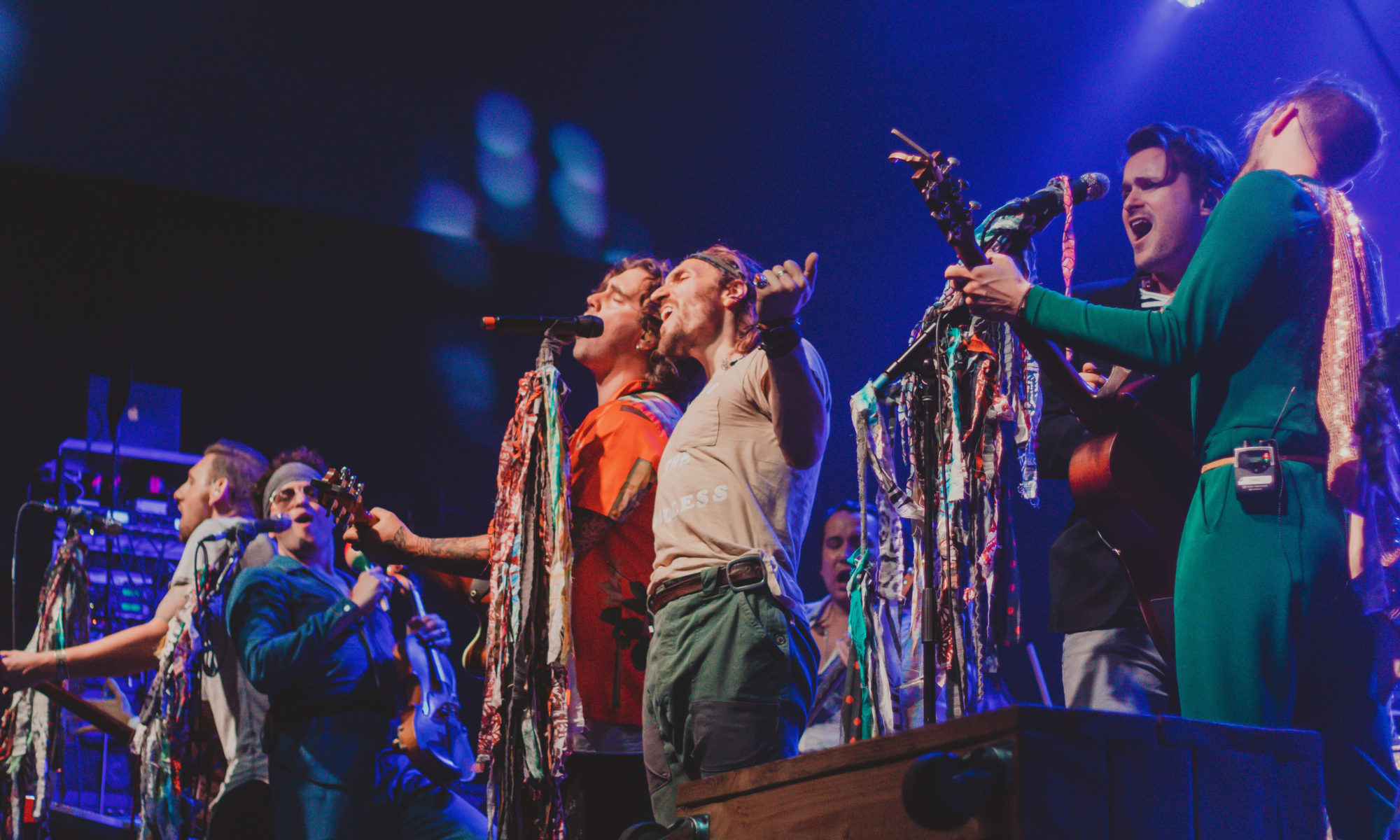 I honestly don’t even know how to begin to explain what an amazing concert The Band of Brothers tour brought to Salt Lake City. For a Monday, it was a party at The Complex, and I don’t mean that lightly. The performers were PUBLIC, Magic Giant and American Authors. I was stoked to see American Authors perform again. It would be my third time seeing them live and my second time photographing the show, last time was when they were here in the summer and performed at Red Butte Garden. That time, they were opening so it was going to be great to see them as a headliner this time. I had never heard of Magic Giant and I only knew one PUBLIC song. However, it was a huge turn out from the moment doors opened, so I expected these other bands to be pretty good.

Now, there are some shows at the Complex where when doors open there are only a few people strolling in, and the crowd gets bigger as the night progresses, and there are other shows where once doors open it’s instantly packed. This was one of those shows. People were in line for merch, snagging their spot in the crowd and getting snacks to eat. These are the best shows because you can tell right from the beginning that everyone is excited.

PUBLIC went on first and oh my gosh, if you didn’t know any of the artists performing that night, you would think these guys were headlining. I’ve been to hundreds and hundreds of concerts in my life, and most of the time, the opener is usually good and the crowd may enjoy what they’re hearing, but this was next level. I’ve never seen another opening band be THIS engaging with the crowd. They came off as funny, lovable, energetic goofs who can play and sing! From the very first song, they had the crowd cheering so loud and dancing along with them. After the first song, the lead singer John Vaughn, asked the crowd to “raise your hand if you’ve never heard of us before!” The majority lifted their hands and his response to that was, “that’s great, this is a gold mine then. We need to earn your love,” to love them and their music. And that is exactly what they did! Jumping on top of crates that sat on stage and coming off stage, right up to the barricade. One of their last songs was “Make You Mine” which is the one I and a lot of other people knew. It’s a cute, cheesy love song that’s super catchy. I have a feeling PUBLIC will come back to SLC very soon as a headliner.

With a great opener, it just sets up the rest of the night to get even better and oh did it get better. The stage lit up and one of American Authors guitarists came on stage with a Plinko board. Yea, that’s what I said, a Plinko board! In the pit with me was a fellow SLC concert photographer who I’m friends with. I looked at her and she was just as confused as I was. On stage, he called out people from the crowd and told them to tell him when to stop, and he’d drop the Plinko chip. There were four spots it could land on. Two of those spots had the American Authors logo and the other two had the Magic Giant logo. One chip landed on AA and one chip landed on MG. He walked off stage and I was so lost. To my knowledge, I thought AA was headlining but soon did I discover it seemed to be a co-headlining show. American Authors came on stage and started singing one of their biggest hits “Best Day of My Life,” but once they started singing, Magic Giant came on stage and started singing their new single, “Disaster Party”. So they were singing a mashup of both of their songs, together! Ha! I was so lost and confused that for a second I forgot I only get three songs in the pit and quickly started shooting again. I think the crowd was just as surprised as we were but the energy was insane! Having all of them on stage was so much fun to watch! After that mix mashup, AA stayed on stage and performed some more.

After a few songs, AA left and Magic Giant came on and started performing their songs. It was a constant party. It wasn’t like there were long wait times between sets, no just continuous. As they said, “this show would have twists and turns!” And that it did. Lead singer of Magic Giant, Austin Bisnow hopped off stage, climbed up the barricade and then jumped into the crowd! He was crowd surfing! And SLC did not let him down, literally. They then asked if it was okay to come off stage and come to the middle of the crowd and play an acoustic song. It was beautiful and the flashlights came out, which always creates a beautiful concert mood. Then out of nowhere, Zac from American Authors is now on stage and starts singing, having everyone turn their attention back to the stage. But then almost instantly our attention turned to the back of the room where drumming started to come from. They literally had people looking around all ways to see where they were next. The rest of AA came from the back of the venue, drumming and shaking a tambourine as they ran towards stage.

I have never been to a show like this. It was actually really cool and really special. The amount of fun you could see the crowd was having and the bands themselves was so great! EVERYONE was having fun! The way they intertwined themselves on stage was something new and refreshing to see, and it was flawless. Long time fan of both bands, Jake Isaacson, 26, said, “I’ve been a fan of Magic Giant & American Authors for years. Magic Giant actually gave me a scholarship to their camp the first year it was held. Great music, great community, amazing live show. Zac Barnett of American Authors is a part of the camp. Very nice guy, also a very talented individual. If you haven’t seen them live. You’ve got to buy a ticket and go see them. It’s a must.”

Another fan at the show, Cassie Neal, 24, expressed her thoughts of the show by saying, “Band of Brothers tour was so amazing! I’ve been to about 50 concerts and this one has been the most energetic and fun with an awesome twist of switching between bands. Every band member loves music and performing so much and it really showed in each song the heart they’re put into it. Can’t wait for both bands to come back again!”

To wrap it up, I think this was one of the most energetic and fun shows I’ve ever been to. AA loves SLC, they say it all the time. And it’s clear to see why. The exchange of love, charisma, energy, and passion for music is impossible to not see. I can’t wait for all three of these bands to come back.