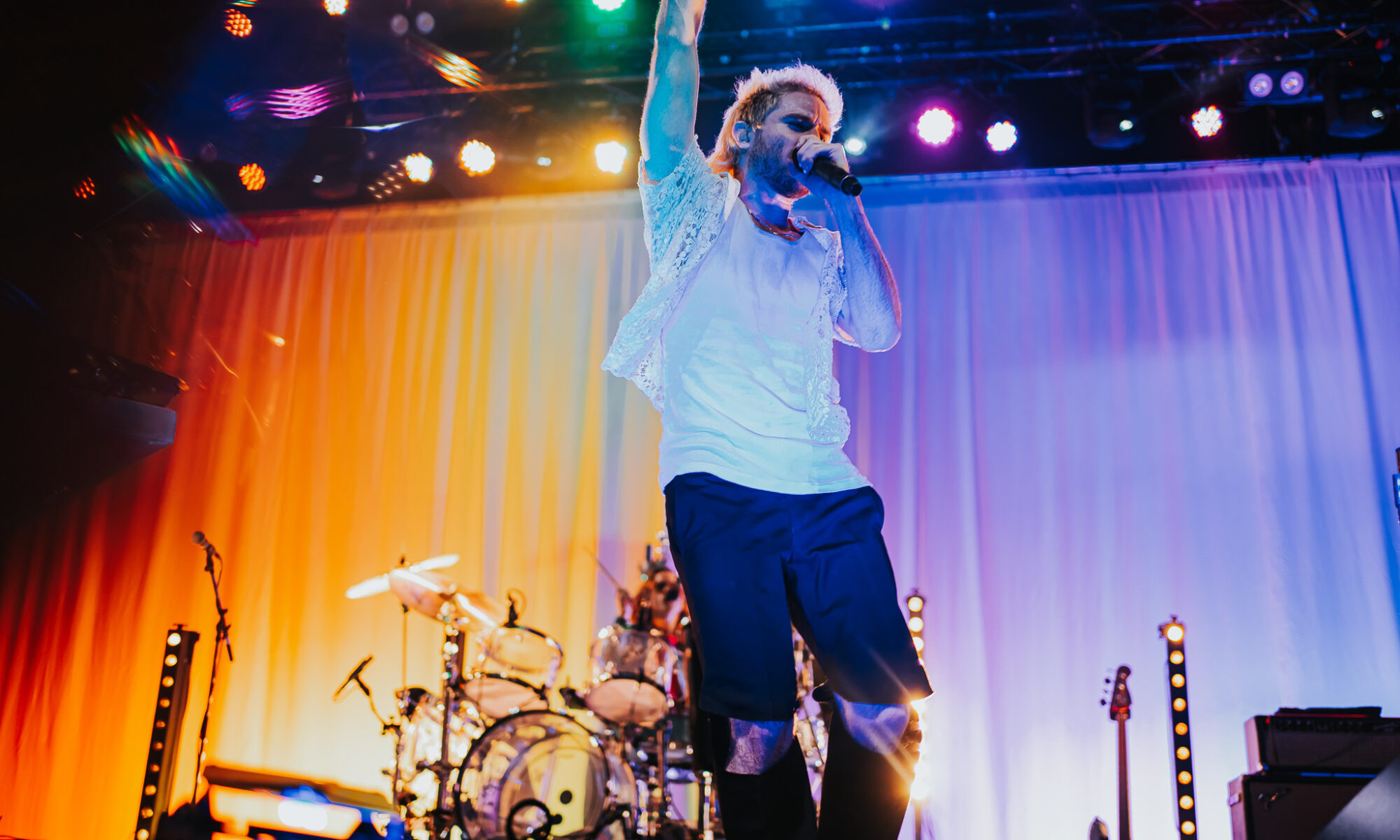 Walk the Moon is one of those bands I found in high school and would just play on repeat all the time! They are such an amazing band to listen to when you’re just really in the mood to groove. Listening to them always put me in a good mood, so naturally, I was super excited to see that they were coming back to Salt Lake City, bringing their Dream Plane Tour!

The last time I saw WTM was back in 2015! I can’t believe it had been that long. I knew I  had to go. It was a super hard choice though.  Because the band Bleachers was also in town! Both WTM and Bleachers fit in the same genre of music, have the same fan base, and everything! So I knew I wasn’t the only one who was having to make a tough decision that night! Ultimately, I chose to go to Walk the Moon at The Complex! It really was unfortunate so many fans had to choose though. If only their tour dates had been offset by a day, I guarantee both shows would have sold out!

I got there right before doors were opening and joined the fans who had purchased VIP inside.  WTM had done their soundcheck beforehand with VIP members and got to do some personal  Q&A with the fans.

I watched the Rockwell room (Big Room) at the complex start flooding in, filled with many fans who I noticed were wearing lots of old and new WTM merchandise. Some of the merch I recognized from the tour I went to in 2015, which was super cool. Musicians are doing something right if you have a fan base that sticks with you throughout the years. That’s how I felt about them at least.

I met up with my friends close to the barricade before the opener went on just to catch up and chat. Some people around us explained that it was their friend’s first concert, which I thought was an amazing thing! First concerts are magical and something so special that you’ll remember forever and could quite possibly start a new addiction…spending money on concert tickets haha, that’s where all mine used to go!  What a great first concert. That made me smile a lot because I took my boyfriend to his first concert back in 2015 and it was also Walk the Moon! It felt cool.

Before the opener even came on stage, suddenly out of nowhere a girl flew forward and landed face first on the ground. All of us around were shocked and tried to see if she was okay but she wasn’t responding. It was quite scary! The medic team was called over and after a few minutes, helped her get up and assisted her out of the front. It was so random and I hope she was okay and could enjoy the rest of the show. I mean, it hadn’t even begun yet. Just remember to always be hydrated and eat before a show! Safety is important.

Once the opener did come on, I snuck out of the front of the crowd and headed to the pit. Jany  Green came on stage with a huge smile on his face with a pep! He’s a musician from  Anchorage, Alaska and his goal is to make people happy with his music. And that’s exactly what he did! His whole performance was so enjoyable to watch because the smile never left his face. He literally was just up on stage vibing and dancing along to his music. The crowd was enjoying it and it really filled the room with some good energy in the air. It’s so much better when you can physically see the artist on stage having fun! And Jany did just that.

Once it was time for Walk the Moon to go on I knew it was about to get loud! And as soon as frontman, Nicholas Petricca came on stage he and the rest of the WTM band were greeted with so much love through screams and smiles. They started off the night with a crowd favorite,  “Portugal”. That song meant a lot to me when it first came out and it was really fun to see it live after all this time! I haven’t listened to WTM religiously as I use to a few years ago, but being at the concert definitely reminded me of how much I love this band and that I still know every word.

“Avalanche” played immediately after, and let me say that song is just so fun! It’s one of those that just makes you groove in your door and nod your head to the beat.  “Different Colors” was next and that song always gets me so hyped! The crowd agreed with me because I saw everyone jumping up and down, screaming the lyrics right back! As always, I’m singing along in the pit, with a huge smile on my face as I get to capture these awesome musicians that I’ve loved for years. I don’t think I’ll ever get over it, any time that happens!

The first three opening songs were all from their album Talking is Hard that came out in 2014!  They’re in the works of releasing their newest album and it’ll be their first one since 2017! So that’s exciting.

After I left the pit, I was able to shimmy my way back to the front of the crowd and meet up with my friend again. I stayed the entire show! Nicholas Petricca is such a happy person on stage! You can very much see it! He dances around and gets super into it. I tagged the band later that night in an insta-story and he shared a photo of him I took with the caption “my happy place” which is him on stage. It was super cool and I’m glad he’s found what he loves to do!  That goes for the rest of the band, they’re so lively on stage and work well with each other.  Guitarist, Eli Maiman gets super into it too! Later in the night he let his hair down from his bun and rocked out with it! Dancing as well.

Later on in the night, Maiman addressed the crowd and told us “thank you for being here with  us tonight…we know you have options for your musical entertainment…because we’ve been in  the same city as Bleachers every f***in night on this tour!” He said with a laugh. Like I  mentioned before, if only the tours were offset by one day, so fans didn’t have to choose! It really was a rough choice! Hopefully, that never happens again! But, for all those who did choose to come to Walk the Moon, had an amazing night!

They performed a very intimate, acoustic version of their song “Kamikaze” where the crowd was asked to join in and sing along to the chorus. Of course, the crowd went absolutely wild when  “Shut Up and Dance” played. That song is such a hit and was one of my favorites from 2015!  Always just made me want to dance! WTM is really good at that, making you just want to get off up on your feet and just jam! They ended the night with an encore and their absolute banger of a song, “Anna Sun”, which is the song that introduced me to Walk the Moon all the way back in 2013. It was super nostalgic to hear it live. It brought back so many memories of high school and late-night drives with the aux chord as I jammed this song.

Overall it was a beautiful night with beautiful energy! Can’t wait until they’re back and can’t wait to hear their new album when it comes out!