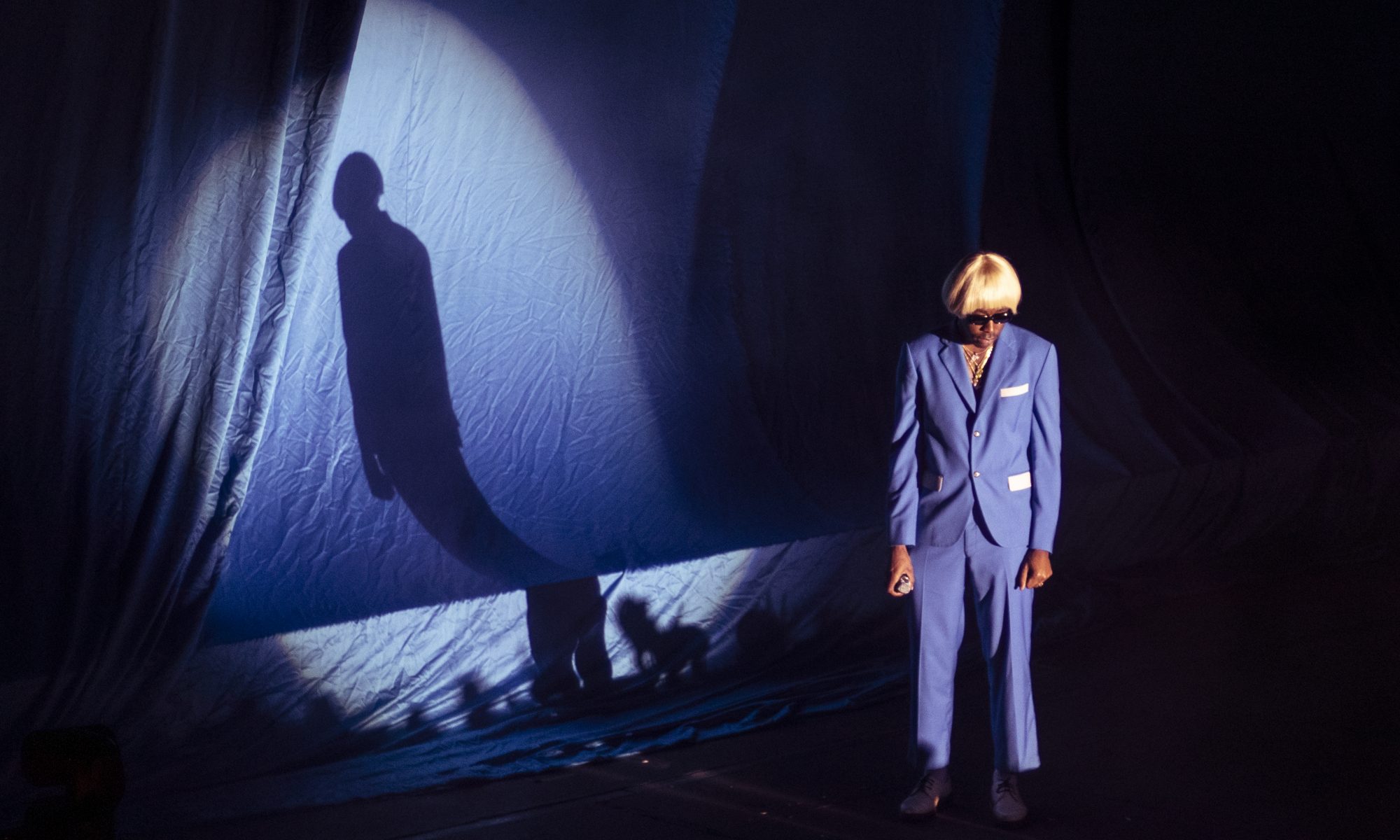 Tuesday night a massive line formed all the way to the parking lot at the Great Saltair full of thousands of fans (mainly people 15-25 years of age) eager to see one of the most entertaining, diverse, controversial, and talented artists in not only the rap world but also in the pop scene as well, Tyler the Creator.

Following the release of his critically acclaimed album IGOR, Tyler stopped at the Saltair with hip-hop sensation GoldLinks and vocalist Blood Orange on his IGOR tour. As doors opened I found my place to the balcony where I would be taking photos and just took a nice look over the venue. As always at the Saltair the sun was beginning to set over the lake and the stunning pink sky was beginning to show. With two opening acts who are already pretty well known and could probably headline shows of their own, the venue filled up much quicker than other concerts.

It wasn’t long before GoldLinks took the stage. His first song was the popular release “Crew.” The place went absolutely nuts, many fans knew the lyrics and I have never seen more people go this crazy for an opener before! You would’ve thought that GoldLink was the headlining act. Mosh pits formed through different songs and it was fascinating to just watch the crowd ripple and shift every drop.

GoldLink was feeling his set for sure and masterfully rapped every bar flawlessly. The energy was insane for an opening set. Before performing his final song he took a look at the horizon to admire where the sun had just dipped behind the lake and said: “Y’all got the most beautiful place I’ve ever performed at.“

The crowd roared and after performing “Crew” a second time he took a bow and stepped off the stage.

The energy began to shift from hype to a more chilled vibe as the crew began setting up for the next act. Mac Miller’s album “Swimming” began playing over the speakers and everyone sang along to the beautiful music from the late legend. As a massive fan of Mac Miller, it really began to set the mood for people to really appreciate some beautiful music.

With almost no introduction, Blood Orange started his performance with a killer guitar solo. The British singer started singing over the beautiful music played by his band. His music can best be described as “Dreamy” and reminded me much of the soundtrack of a 80s or 90s tv show or movie such as the breakfast club. It had a unique feel that sounded retro but also new as well.

He gracefully transitioned between songs with almost no speaking or introduction between songs, he switched between multiple instruments guitar, to piano, and a string instrument I wasn’t sure of the name of. As he swayed and sang around the stage he carried a bouquet of flowers half white half red and would occasionally toss one into the crowd. Sometimes one of the two talented background singers would do a quick solo and paired with the visual on the screen portraying seemingly random footage it created a whole artistic performance. Across the whole venue, you could see couples holding each other, and others just swaying to the beautiful artwork we were experiencing. It was a very surreal feeling.

The sun had finally set and the wind began to pick up so it was starting to get chilly. But I don’t think that anyone was worried about that because up next was the legend himself Tyler the Creator. I had seen him perform two years prior on his Flower Boy tour but really had no idea what to expect because I cannot think of someone who has evolved their music as well as their style than Tyler the Creator.

A blue curtain dropped and a single spotlight aimed at the middle of the stage turned on. Tyler came out in a Blue Suit and his infamous blonde wig and glasses from the IGOR music videos. Fully rocking the IGOR persona he stood motionless in the center of the spotlight as “IGOR’s Theme” began to play. Occasionally singing the repeating lyrics “Riding round town they gon feel this one” the crowd singing along anticipating the drop. Once the beat dropped Tyler began his electric dance across the stage and ended the song with a powerful shriek that echoed across the audience.

Staying in character through the first 5 songs (all off the IGOR album) Tyler sang and danced skillfully even moonwalking and gliding across the stage. After his smash hit “Earfquake” he finally spoke to the crowd welcoming them to the IGOR tour. He joked about how Salt Lake itself is the most boring city ever and when the crowd cheered he laughed and said: “Most cities would boo me if I said that but y’all are like ya we know!” Although his music is often intense and beautiful Tyler still is the goofy and extremely funny person on the internet that many people recognize from Odd Future and across different internet videos.

He told a story about a bike ride he had that morning in UTAH and how the mountains here are so beautiful. He spoke about how he saw a few deer and how cool that was to him because he never sees anything like that in his home in Los Angeles. He apologized for not having his normal staging setup and how because of the wind it was a safety issue so he would just perform on the stage but that he could tell we didn’t care about that and would still have a fun night.

After talking for a couple of minutes he performed “911”. The audience sang the lyrics “call me sometime ring a ring ring” and you couldn’t help but smile to just the happy bliss of the song. Next, he hopped into some of his older stuff, while many of the younger fans may not have known some of the songs, many of us who had been listening to him since back in his Golf Wang days absolutely loved it!

Right before “IFHY” he was raised up on this platform and that’s when the show really picked up energy. On “Tamale“ He didn’t skip a single lyric on the extremely fast song (I felt proud that I could still keep up with it) it was a party! The next three bangers were “Yonkers”, “She”, and “Who Dat Boy” three of his craziest songs that really established him as a star in the “Shock Rap” genre.

It’s fascinating to see an artist be able to crush insane hip hop mosh songs, to also sing beautifully and also just produce some really peaceful and gorgeous songs such as “Boredom” “See you Again” and “Are We Still Friends” which he ended with. Tyler is such a creative mind and a talented individual who has created some amazing songs and I’m sure will create many more!

RUNNING OUT OF TIME

ARE WE STILL FRIENDS?