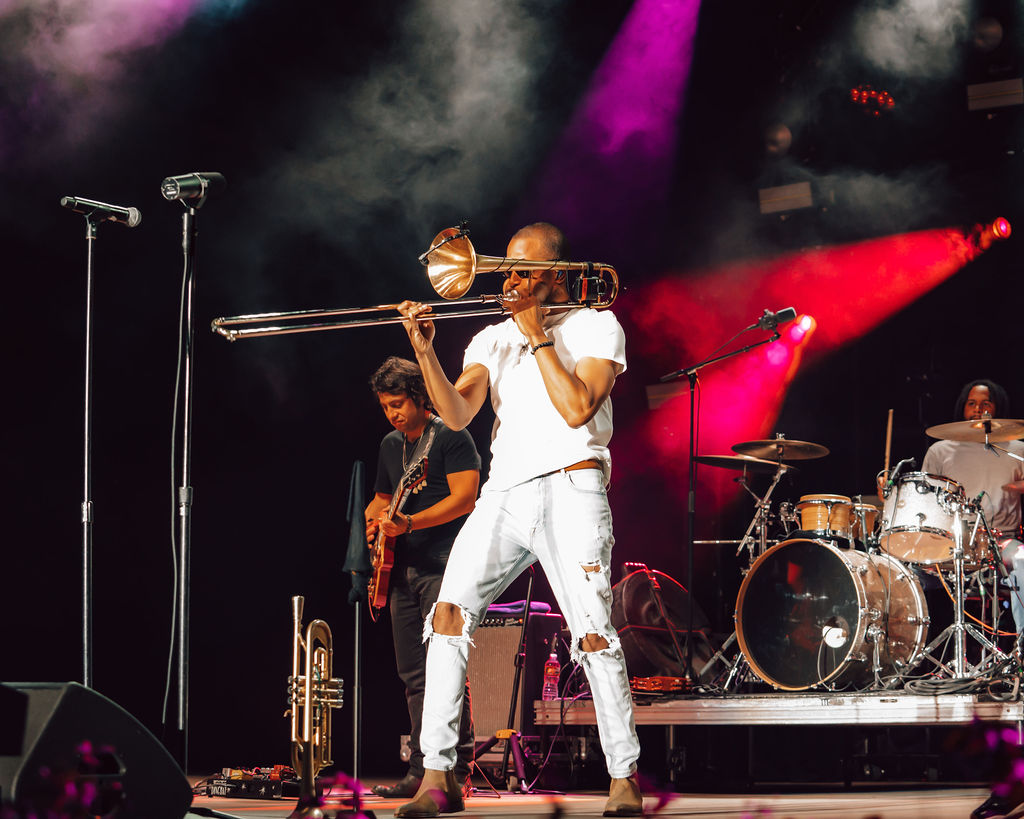 It’s a beautiful night for live music. It’s the middle of the week and some soulful, funky, jazz music is just the perfect refreshment from the busy work week. The weather was perfect and it was a packed house as soon as we got there. I truly enjoy Red Butte Garden. People bring their chairs, blankets, wine, beer, and all sorts of snacks. It’s a family affair when you attend a show at this venue. I would say this is the perfect place to bring the family together to enjoy live music and food.

Once again I wasn’t familiar with either act. I personally think that it’s always a thrill going into a concert and not knowing what to experience.  There’s something magical about hearing a band for the first time ever at their concert. I think that seeing them in their element provides a unique experience.

Gov’t Mule was opening up the night and from my first observation, they were not the opener. They just went on first. The amount of fans was about 50/50 between Gov’t Mule fans and Trombone Shorty. There was a huge turn out of classic rock fans that were eagerly waiting. The cheers came from people ranging from older men and women. But there was also a surprisingly large amount of younger fans. It was amazing to know that they have a huge following that spans different decades.

The band was led by legendary guitarist/singer-songwriter, Warren Haynes. I got to chat with a couple of the fans that were seated right upfront. They told me a little about his history. Warren was a legend in classic American Rock. I felt very lucky to be able to photograph and listen to his music. He was accompanied by Matt Abts on the drums who sported a bandanna and was covered in tattoos. Danny Louis was on piano and backing vocals, and last but not least Jorgen Carlsson was on bass.

Gov’t Mule opened up with “Hammer and Nail,” and the crowd sang word for word. I had never experienced classic rock this close and I was soaking in every moment of it. The energy of the crowd was amazing and extremely welcoming, cheering and screaming “We love you Warren!!” The first song had this very groovy tempo that made everybody get off their seats and sway along with a beer in hand. I was highly impressed with his guitar solos, he showed his years of experience with intricate and melodic riffs.

Each band member had pretty significant solos throughout each song, and “Mule” was up next on the list. I feel like the drummer always gets overshadowed, but with a seasoned band and band members with years of experience, Matt Abts shined in this song. The drum pattern and rhythms were crispy, but also at the same time, it was smooth. The hardcore fans never once took a break and were up and banging their hands together through every single song. Warren Haynes would finish each song and always gave this look of deep appreciation for his fans.

Being a Jam style band, there were a lot of instrumentals in the songs, so when Warren would get back on the mic, it would always bring the attention back to him. For his age, it was really impressive to know that he has kept his voice so smooth. The sun had set and Gov’t Mule was ending off to the soulful song called “Soulshine.” I had chills as soon as he sang and seeing the crowd fill up both sides of the stage and embrace each other and sing word for word. It was an honor for me to come and experience Gov’t Mule for the first time and truly take in their music that has inspired many.

When you hear the name Trombone Shorty, the first thing that comes into my mind is confidence, jazz music, and a party. Trombone Shorty and Orleans Avenue were ready to get on stage and the crowd couldn’t wait. The fans that filled up the stage never left and now everyone has left their picnic area and are headed to the front to dance.

Heading into the show, I did a little bit of research on Trombone Shorty. With my love for the city of New Orleans and its culture, I had to find out more. My friends that were New Orleans native told me they knew about him since he was 16. Trombone Shorty, who is now 35, has spent years in the music industry and still stayed true to his jazz roots. The Orleans Avenue band was on stage before Shorty and the stage was full. With 2 backup singers, a saxophone player, 2 drummers, 1 bassist, and 2 guitarists, this reminded me of hanging out on Bourbon Street and dancing through the night from bar to bar and listening to extremely talented bands.

As soon as Shorty stepped on, he danced from the left to the right side of the stage. He brought so much energy that the crowd definitely felt it. It was an amazing atmosphere being in the middle of the action. I like to call it organized and beautiful chaos. Trombone Shorty is famously known for his trombone skills and I was shocked with the music he was able to coax out of that instrument. He traveled between different band members and gave them their moments. The backup singers sang beautifully, their high-pitched and strong solos were a refreshing sound to my ears.

However, I personally think that the Saxophone player was the star of the band. The lights would go down several times and there would be a spotlight on the middle of the stage, and as soon as he stepped in it, you heard the ladies scream!

Trombone Shorty also mentioned that he travels to Salt Lake quite often. In between his set, he mentioned Utah as being his second home and he appreciates how welcoming the crowd is all the time. They kept the party going with a cover of Ernie K-Doe’s “Here Come The Girls.” The song reminded me of my time during Mardi Gras and seeing the Krewe of Muses parade. The songs were curated for shows like this, Outdoors, plenty of booze, and a whole lot of dancing. It was so much fun interacting with the crowd and dancing together. I also found a big Trombone Shorty fan that even brought his sax and was playing with the band by the front of the stage.

It was such a beautiful experience. I will always have so much love for the city and music of New Orleans. Trombone Shorty left the crowd gasping for air and in a standing ovation. He was extremely gracious after the show. The crowd definitely got their money’s worth tonight. They’re sure to be going home with extreme joy. I can’t wait to see Trombone Shorty again and party with him and his band.

Man I Wanna Be

If Heartaches Were Nickels

It Ain’t No Use

On Your Way Down

One Night Only (The March)

Hurricane Season/ Do to Me/ When the Saints Go Marching In