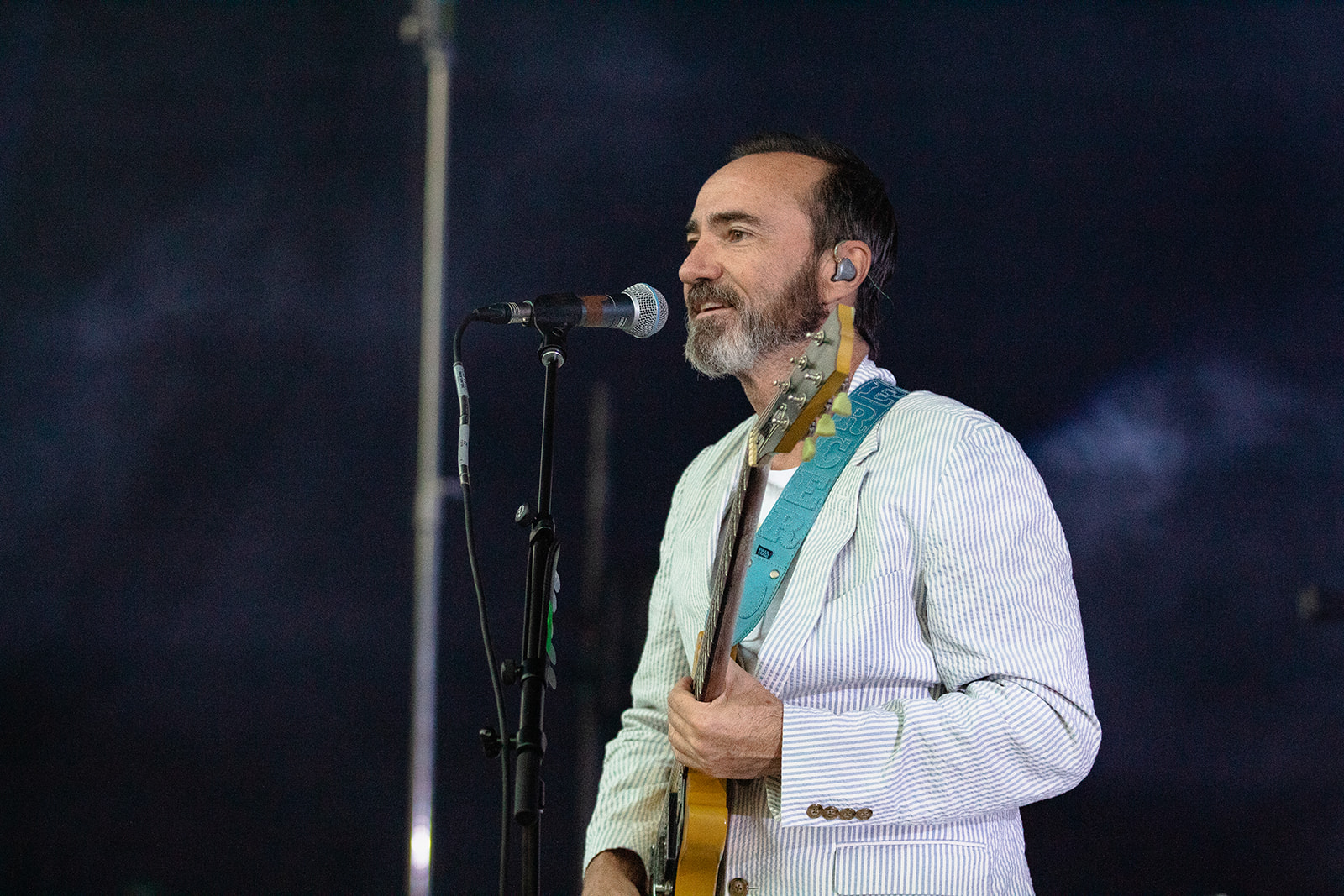 Have you ever made plans to go to a concert knowing you were in for a good night?  The lineup is great, the venue is cool, and the company you’re rolling with is just who you want to be with.  And while you know there is no way this particular concert can wrong, unless there’s some natural disaster or unforeseen incident, this concert far exceeds any expectation you might have had.  Well, that was the case at Ogden Twilight with The Shins and their special guests JOSEPH.  I knew I would like this concert.  How could I not?  Two amazing bands in one night.  But somehow, someway they exceeded my already high expectations.  This concert was incredible.

As I walked into Ogden Amphitheater I could feel a buzz in the air.  We were about 5 minutes away from JOSEPH taking the stage.  You enter Ogden Amp from the back of the venue.  So I pretty much walk through the whole venue to get to the photo pit by the stage.  It gave me a chance to look around at the crowd.  The venue was already packed.  People seemed so excited.  Like the rest of the crowd, I have enjoyed The Shins for years.  Yet somehow this would be my first time seeing them in concert.  As much as the anticipation grew to finally have that opportunity, I was happy to be seeing JOSEPH again.

When I heard that The Shins were going to be playing at Ogden Twilight, I was very excited and knew that I wanted to attend.  But when I heard that JOSEPH was the supporting band I knew that this was a concert I 100% would not be missing.  The first time I saw JOSEPH was the last time I saw concerts for two years.  They played The Commonwealth Room in Salt Lake City in March 2020 and after that everything shut down.  It was a strange night, but what wasn’t strange was how amazing these sisters sounded together.  It was no different in Ogden.  They sound so good together.

This time JOSEPH was not backed by a band.  It was just the three Closner sisters on stage together.  The only instruments were their voices and an acoustic guitar played by Natalie Closner Schepman along with a small amped up drum effect she would step on to create a beat.  It was strange to think that there were so few instruments but the sound filled that amphitheater.

Songs like “Canyon” and “Green Eyes” displayed the beautiful harmonies between these sisters.  I’ve heard harmony between family called “Blood Harmony”.  JOSEPH definitely has that.  It’s a sound that sits in your ears so nicely. Anytime they would hit a big chord I would look around and see the amazement in people’s eyes.  There’s something extraordinary about it.  As their voices rang out in the summer air I sat there smiling because I knew they would kill it.  I wasn’t sure how many people coming to see The Shins would know JOSEPH.  They’re from different genres of music.  I couldn’t get a real gauge on how many people in the crowd knew them.  Mainly because of the loud ovations they got.

I can say that most of the people who were around me were unfamiliar with JOSEPH going into the show.  But I saw people mid-show opening their Apple Music or Spotify and downloading a particular song or album.  That says a lot to me about winning over a crowd these days.

They surprised the audience with a cover of Brittany Spears’ “Toxic”.  People sang along and loved JOSEPH’s version of the song.  My favorite part of their set was their performance of my favorite JOSEPH song, “White Flag”.  It’s an empowering song that truly gets me emotional every time I hear it.  And they sing it with such power and passion.  How could they not? It’s an incredible song.  They’re one of my favorite bands to watch closely because they seem to be loving every minute of it.  Their smiles and expressions are infectious.  Their set felt so short.  But it wasn’t any shorter than any other typical opening set.  They just drew me in and I didn’t want it to end.  But of course, the night was not over and The Shins were on next!

As I mentioned, there was a buzz at Ogden Amphitheater.  As I returned to the photo pit I felt people gearing up for The Shins.  People were so ready. Even the security guards, or for this occasion I was told to call them Shin Guards, seemed hyped up.   I talked to some people on the railing.  Some of them had never seen The Shins, like me.  Others had seen them all over the country many many times.  One Utah native had seen them pretty much everywhere but in Utah.  No matter how many or how few times they had seen the band, they all seemed to have the same level of excitement and anticipation.

One of the most exciting things about this concert for many fans of The Shins was that they’d be playing their first album, Oh, Inverted World in its entirety.  I was not aware that was happening.  I remember a fan telling me that and I responded, “Ok, my excitement level just went up like 100 notches!”.  “Right?!” they replied.  Ah the communal feel of a concert. There’s just nothing like it.

The Shins walked out, all dressed in white, with founder and frontman, James Mercer donning a seersucker suit.  They took their places to a deafening crowd.  And as if it was 2001 and put your Oh, Inverted World CD in your player and hit play, “Caring Is Creepy” began and we were off! From the first note, the audience was with The Shins. The band sounded amazing.  Mercer sounded just as good vocally as he always has.  He has such a unique voice.  The minute you hear it, you know it’s him!  I noticed him look out to the crowd with a subtle smile.  I think he was impressed with how into it the crowd was.  Or maybe he was thinking “This song gets them every time.”.  I guess I’ll never know.  But he seemed to be enjoying himself.

For the third song, much to my delight, JOESPH reemerged on stage to sing backup for “Weird Divide”.  It was so awesome to see them again.  They seemed to be in heaven.  Earlier in the night, Natalie, when talking about how great it is that they get to open for The Shins, said, “I’m a millennial.  I mean, you remember the first time you heard The Shins, right?”  Little did I know they’d be singing with The Shins.  They added so much to the song and as it turned out, they’d be on stage with The Shins quite a bit throughout the show.

The Shins flew through the rest of Oh, Inverted World, and before we knew it they had finished “The Past and Pending” and the album was completed.  When the song ended there was applause different than the others.  The crowd was applauding the entire album.  The piece of artwork we just witnessed.  It was like going to see an orchestra and they complete a great symphony.  The audience applauds the work.  It kind of felt like that.  But then there was more to come!  The show continued with more of The Shin’s great songs.  Favorites such as, “Australia”, “Phantom Limb” and “St. Simon”.  Everyone was having a great time.

The peak moment of the night was when the band ended their main set with “Simple Song”.  The song began with its crescendoing synths and the crowd went crazy with excitement.  Not to the point where The Shin guards had to take action.  In fact, I saw many of them bobbing their heads along to the music.  But the crowd was an ocean of arms and hands waving through the air.  I like “Simple Song”, but just like this concert as a whole, hearing it performed live really blew me away! However, I did not expect it to be this, for lack of a better word, Rockin’! I still think about that moment even now.  What an incredible performance!

The show ended with “Sleeping Lessons”.  I can’t say in my wildest imagination could I have expected The Shins to include a snippet of Tom Petty & the Heartbreakers’ hit song “American Girl” in the middle of “Sleeping Lessons”.  It totally fit right in. If you go listen to “Sleeping Lessons” you can totally hear where “American Girl” works.  The crowd’s reaction to that surprise including in their concluding song was everything I’m sure the band hoped to get.  The entire night was above and beyond anything I ever expected.  And I was expecting a lot.  But that’s the beauty of live music.  I’m really happy I didn’t miss this show.