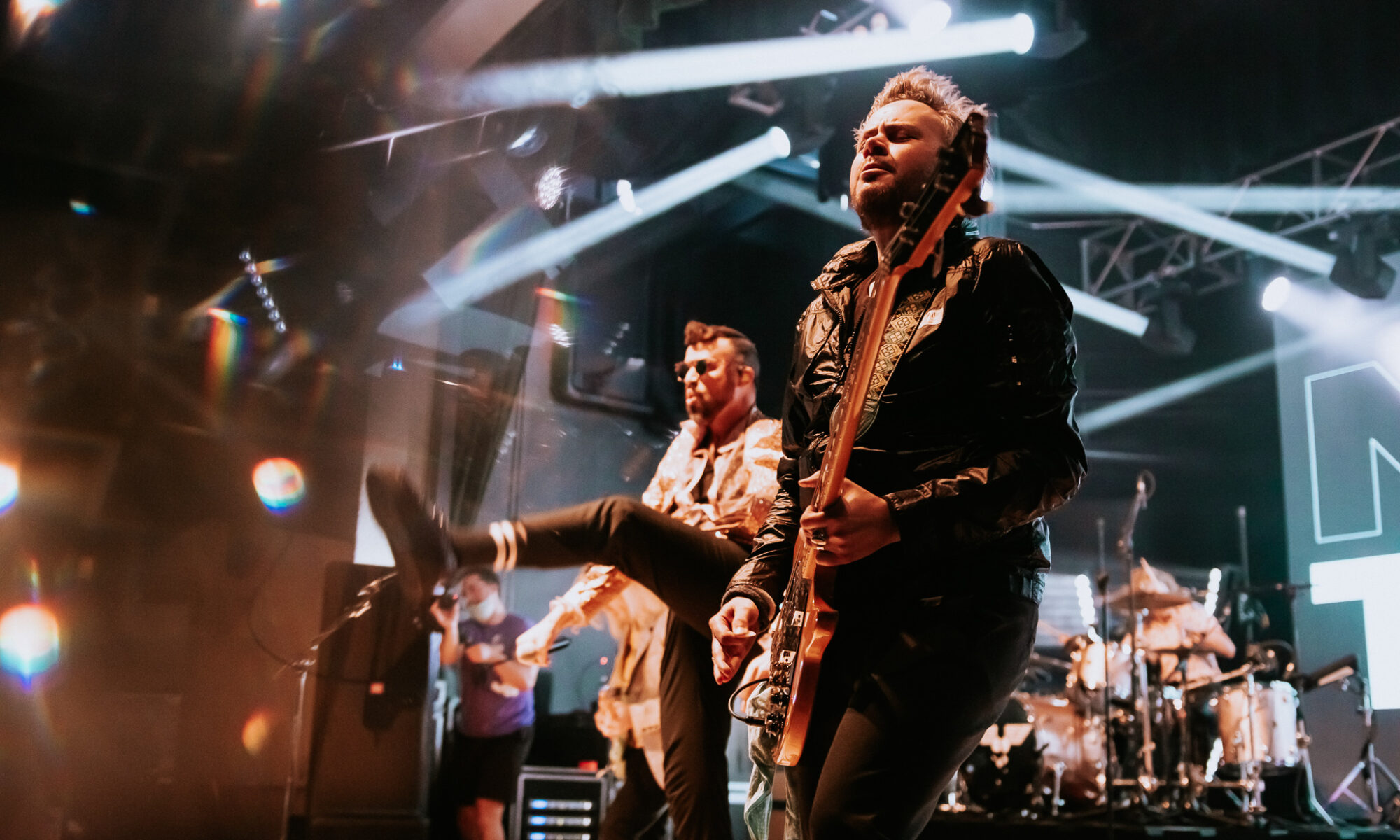 Doors are supposed to open at 6 PM, but because of the crazy weather that evening, everything got pushed back like an hour. It was raining in downtown Salt Lake City. There was a giant double rainbow over the buildings. Color and thunder and sunshine all happening at the same time! It was really pretty. When I got there at 6:30 PM the doors had opened and the line was still wrapped around the corner. But despite the weather and delays, people were still really excited to get in it to enjoy the food trucks, games, and Twilight vibes.

Neon Trees had two opening acts, The Rubies and Peach Tree Rascals. From outside of the venue while I was still waiting in line, I could hear music playing. The Rubies were on stage and their setlist got cut super short because of the delay. However, as I got through the gates and ran towards the stage, I caught the last of their performance, and even with the sudden change,  the girls killed it.  They had an awesome amount of support from the people already in the crowd! Even afterward, tons of Rubies fans took to Instagram to tell them how much they loved them and how awesome they did and how they wish they could’ve heard more. I was bummed I wasn’t able to photograph them, but it’s okay!

Next up was Peach Tree Rascals. What an interesting name! I had never ever heard of them before and had no idea what to expect. So it came to my surprise when I saw tons of guys on stage who were all in the band. The second they started their set I was OBSESSED!  Their whole vibe was super fun and energetic, they were charismatic and charming and the crowd absolutely loved them!

With the number of people singing along, I was questioning how I  had not heard of them yet. You could tell they were just having so much fun on stage and even let Salt Lake know that this was their 4th show ever!! You wouldn’t have believed it because of how awesome and natural they were up there! I extremely enjoyed them and their music.  I now consider myself a fan! Their song “Mariposa” just went Gold and I’m so proud! I can’t wait until they come back!

Finally, it was time for the headliner of the night! When Tyler Glenn, frontman of Neon Trees walked out on stage in his sparkly, gold jacket and cool sunglasses, the crowd went wild! You  could hear people screaming “Tyler I love you!” From various areas of the crowd. He soaked it all in and kicked off the night with “Moving in the Dark”. They followed that with their all-time hit “Animal”.

Everyone in the audience sang back every word and it was such a roar to hear! I love when that magical dynamic between bands on stage and fans in crowds happens. You just know the music means a lot to both! All of Neon Trees get super into it on stage, dancing around to their own beat and straight up just having a blast! But especially Tyler! He was kicking his legs so high and skipping along the edge of the stage, holding the mic stand. It’s super entertaining!

I asked concert attendee Max Taylor, 23, what he thought of the night! He said, “Although the  Rubies set was cut short, those girls are making a huge stamp on the Utah music scene.  Tonight was unreal. Neon Trees is a Utah legend and it was good to see the whole band perform together. Tyler Glenn is absolutely iconic.”

I can’t disagree with that! Utah loves Neon Trees, Peach Tree Rascals, and The Rubies.  I’m sure they will all find themselves performing here again in the future.  And I’m sure the crowd will go wild for them!