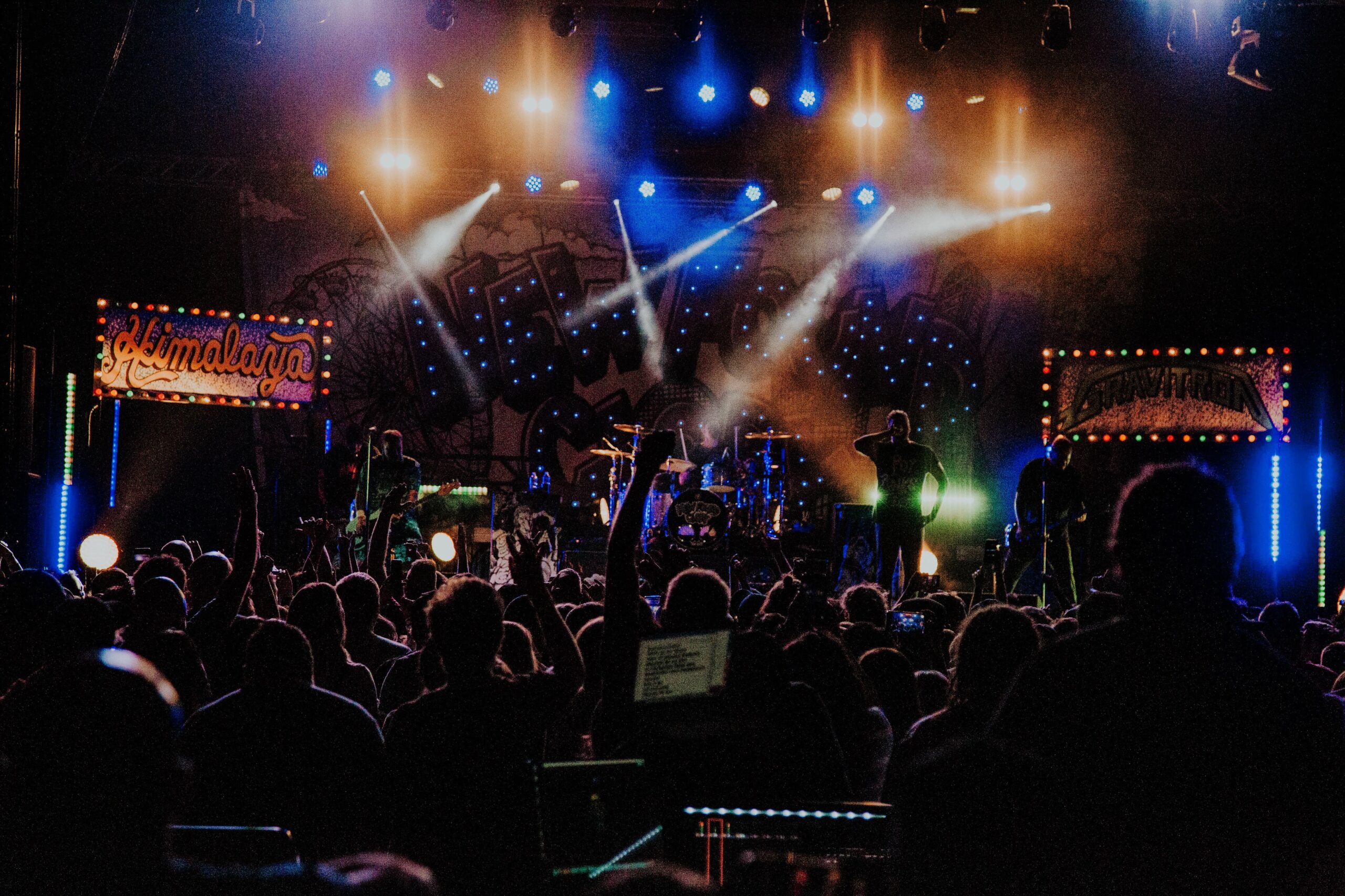 Early that morning Less Than Jake announced that a touring crew member had tested positive for COVID-19. Due to keeping fans and the rest of the bands safe they were unfortunately not playing that night. As disappointing as it was to hear, people were still very much excited to see New Found Glory. With Less Than Jake off the lineup, the show started a little later.

LOLO kicked off the show. They had a ton of amazing fans in the crowd which she was not expecting in the slightest! She put on an amazing performance with her band. After the first song, I was convinced she was the pop-punk version of Olivia Rodrigo and deserves just as much support and recognition. It was their first time ever performing in Salt Lake City and we immediately stole their hearts. LOLO was a ball of energy from the start. She was constantly darting back and forth along the stage. I was sure that if it wasn’t such a far reach from the stage to the crowd she would’ve been right up against the rail with her fans.

Between every song, you could just see from her facial expression and the amount of shock and gratitude that was running through her head. She had decided that morning and spent the majority of her day with the band practicing an upbeat pop-punk version of her acoustic song, “Dear First Love”. It was her first time ever performing it and I can for sure say I’m a fan! She closed off the set with a cover of the classic song, “Teenage Dirtbag”. This got everyone warmed up for the rest of the night. She was so thankful and blown away to hear such a large crowd singing back her lyrics. It’s safe to say to keep an eye out for her return to Utah!

Next up was Hot Mulligan. These guys have been a favorite of mine for years. I firsts saw them at Kilby Court. I remember thinking that one day these guys are going to play the bigger venues in Salt Lake City. And it will be a site to see. This night was that night! It was a memorable night for the band because it was the biggest crowd they’ve ever played for. Even if the majority of the crowd didn’t know who they were. Just knowing that they got to play their music for them and gain a couple of new fans was enough for them.

Hot Mulligan’s music resonates much with the classic style of pop-punk. They got a sense of energy to them that’s worth seeing. They announced that they’ll be returning to Salt Lake in the fall for their headlining tour. After their set, a few fans had rushed to their merch table to tell them how excited they were to catch them again!

Now, the craziness of New Found Glory. During the intermission, typically the crowd disperses from the room to check out merch or catch a quick smoke break. Tonight, was the complete opposite. Once Hot Mulligan had stepped off the stage the crowd stepped closer and began chanting, “New Found Glory!” as equipment was being rotated out on stage. Pop-punk definitely brings out a rowdy sense in people and Salt Lake was ready to get rowdy.

The band kicked off their set with a classic, “Understatement”. This got the crowd up off their feet and singing right along. While the set was well underway, the show was stopped by some technical issues during the first verse of their third song. The band had admitted they hadn’t noticed because of how loud the crowd was singing along.

The front half of the crowd had assumed the song was stopped because a younger fan was pulled over the railing by security and was in tears. Security was quick to react and made their best efforts to calm the kid. Once guitarist, Chad Gilbert had caught sight of this interaction, he and vocalist Jordan Pundik handed her a couple of guitar pics and a drumstick to help calm the upset nerves. It was such an amazing and intimate moment that we all got to witness to remind us just how amazing and sincere these guys are!

As security took the child and her mom off to the side away from the photo pit, the band was told they could continue playing. Unfortunately, they would have to play without the lighting set up due to the malfunction. The band was quick to agree they didn’t need crazy lights. As long as everyone’s mic and monitors were working, they were good to go!

With a subtle backlighting, the band kicked back up the third song from the beginning. This one small complication went unnoticed. Just as we all were getting comfortable and we thought this just might be how the rest of the show is going to look, luck struck at the best moment. Right as the second verse ended and they moved to the chorus! The band’s set up that had small hints of circus and carnival attractions lit up and flashed like crazy. This quickly got the band and the rest of the crowd even more excited.

We weren’t completely in the clear, however. The monitors had gone off again before they started playing their fifth song, “All Downhill from Here”. The band was then asked to wait two minutes while the issue was dealt with. They were patient enough to agree and stated, “It’s been two years. We want to put on a good show rather than rushed one!” As we waited for crew members rush to problem solve, the band took the time to express how thankful they were for everyone showing up that night. They were grateful for everyone being understanding with the COVID policy that they had set up to keep everyone safe which was for an entry.

Guests were to provide proof of vaccination. They had apologized sincerely for Less Than Jake missing out on the show last minute. And for Simple Plan dropping out of the tour. But were happy to have people still come out and catch them on tour. It’s their absolute favorite part of the entire job.

Once they had gotten the green light the issues were quickly forgotten as the band blew through the setlist playing a wide range of newer and older songs and even a couple of covers such as “This Is Me” from The Greatest Showman and “Let It Go” from Frozen. During “Let It Go”, Jordan had quickly slipped on an Elsa costume to really set the tone. We also got to welcome and thank Terror’s guitarist, Martin Stewart for supporting the band and bringing a little bit of a heavier sound to the songs. The band even brought back on LOLO for support during “Vicious Love” to cover what is originally Hayley William’s vocals and it was a remix everyone was loving!

As crazy and hectic as the night was, with all the issues that had come across this didn’t put a sour taste in anyone’s mouth. New Found Glory made it known how much they love Utah and especially The Complex because it’s always been such an amazing experience. As the night came to an end the band had officially deemed that Salt Lake City, a crowd of two-thousand pop punk lovers were the loudest crowd of the tour! It was definitely a night for the books!