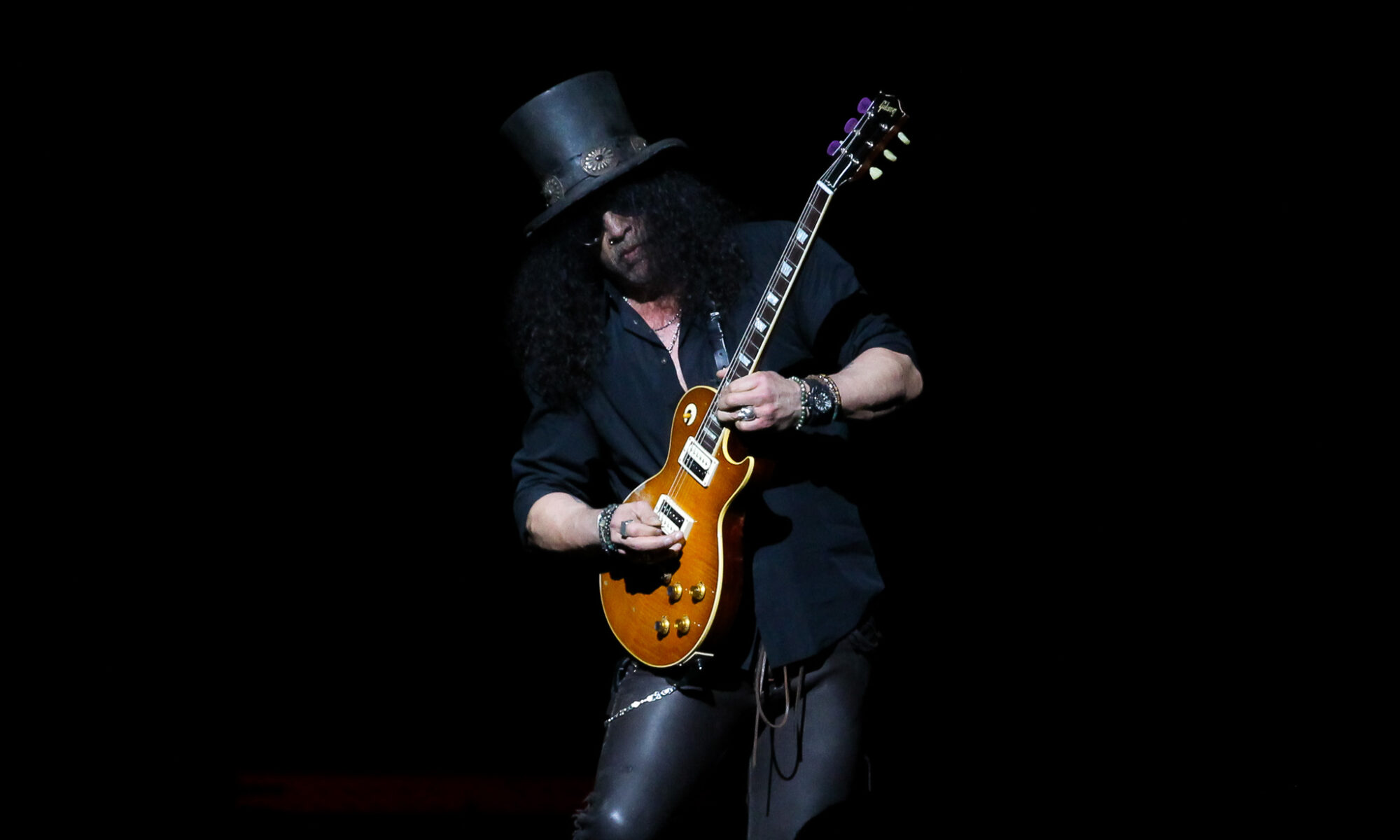 It was so interesting walking into the Delta Performance Hall of Eccles because I’m used to seeing musicals or singer-songwriters or comedians in there.  Not legendary rock gods.  But this theater can handle anything.  The sound was incredible as always, and there wasn’t a bad view of the stage.

Dead Sara (Not Pictured) was playing as I got to my seat.  The first thing I noticed was how much I liked Emily Armstrong’s voice.  They had a great hard rock sound and the people around me were feeling it. Armstrong joked about being sleep-deprived and not being stoked about driving to Denver in the snowstorm that was brewing outside.

The thing I love most when I see a support band is finding their fans in the crowd.  And Dead Sara definitely had fans in attendance.  I could see people singing along, some knew every word.  Those who might not have been as familiar still seemed to enjoy the music.  People were bobbing their heads in their seats and the ovations were generous.

Slash with Myles Kennedy & The Conspirators

The moment arrived.  The lights went out, the band took the stage, and when the spotlight hit the stage, there he was.  Slash in person!  It was so surreal.  I just kept thinking, “It’s him.  It’s really him. He’s right there.”.  Have you ever had that experience?  It’s nuts.  They opened with “Driving Rain” from the Slash with Myles Kennedy & the Conspirators’ 2018 release Living the Dream.  The entire audience was on their feet and everyone seemed in mid-show form already! Slash donned his iconic top hat strapped with a Gibson Les Paul guitar.  The person next to me said, “The guy doesn’t age!”.  He was right.  Other than a little salt in his salt and pepper facial scruff, Slash pretty much looked the same as he always has.

There was so much to take in.  The music, the lights, the energy of the crowd, Slash’s playing.  I found myself so often just totally in awe with Slash’s playing.  Whether I knew the song or not, I didn’t care because it was so cool to see him working that ax.  It’s a sight to behold and I recommend everyone see Slash play live.

Myles Kennedy was in peak form.  His unique voice rang throughout Eccles Theater.  He sings with so much passion, but his stage presence seems so laid back.  It’s amazing he can hit those huge notes while looking so easy going.  Slash doesn’t talk to the audience much, and notoriously doesn’t even look at the crowd much.  So Kennedy handled most of the crowd work.  He told the rabid Eccles audience “You guys are a rowdy bunch!  It’s a beautiful thing.”.

I enjoyed hearing songs from the newest album 4. An album they guys made during the pandemic.  Unfortunately, they ended up getting COVID in the process.  Thankfully everyone is ok and released a solid album.  “The River is Rising” and “Whatever Gets You By” were well received by the crowd.  Kennedy joked about playing the triangle briefly in the intro of “Whatever…”.

I can’t claim to have a vast knowledge of Slash’s solo career.  I know Guns N Roses and Velvet Revolver quite well.  And I was hopeful that we might get a song or two from those catalogs.  I understand that this is an entirely different entity so I don’t blame them from wanting to focus on their songs.  If anything, it gave me an opportunity to appreciate these songs that I didn’t know as well.

I must say that I was most certainly in the minority when it came to extensive knowledge of these songs.  I looked around the theater and saw so many people singing word for word.  These people were Slash fans.  Like Slash solo work fans.  I loved seeing it.  The audience was a good mix of young and seasoned rock fans.  Some side by side singing the lyrics to each other.  My favorite group of fans was the people in Box A.  From the minute the show started until the very end they were going.  Dancing, singing, high fiving.  They were going so hard that several times band members made their way over to the direction of their box to acknowledge them and show their appreciation for their rocking ways.

The Conspirators were such a fun band to watch.  You can tell these guys enjoy playing together.  Todd Kerns stepped to the front a couple of times taking the lead vocals on “Speed Parade” from Slash’s Snakepit and “Doctor Alibi”.  He is so high-energy.  It was a fun juxtaposition to Myles’ more laid-back approach.  Brent Fitz seemed to always be smiling there in the back on that drum riser.  He sounded incredible on the drums and added to the good times with his infectious playing.

Frank Sidoris seemed to take a backseat approach.  I mean, he’s the other guitar player to Slash.  That’s a long shadow.  But for every lead guitarist, there needs to be an amazing rhythm guitarist, and Sidoris was very much that.  He didn’t seem to seek the spotlight much.  In fact, there were many times I was trying to get a photo of him and he was literally in dark.  These guys are amazing players and I can see why Slash wants them in this band.

One of the highlights of the night and for many in attendance, a huge surprise, was the cover of Elton John’s mega-hit, “Rocketman”.  I never saw it coming.  When it started I thought the song sounded familiar but couldn’t place it until Myles Kennedy started singing.  Turns out the guys performed it recently on Howard Stern.  Be sure to watch it.  It was one of my favorite moments of the night.

The band played for two hours!  The audience never wavered or seemed to tire out. We even sang the band’s #1 fan, a woman who follows them on tour, “Happy Birthday”.  She turned 70 at this show!  Slash finally spoke when he introduced Myles Kennedy.  He also told us we were beautiful.  They finished out the main set with “World on Fire” the only song they performed from the album of the same name.  The crowd roared and begged for another song.

Of course, the band returned.  First Slash alone then everyone reclaimed their positions on stage. They broke into “Anastasia”.  The crowd erupted again. The song goes on for almost nine minutes.  It’s an awesome closer.  Slash gets tons of solo playing and the song totally rocks!  Now I can’t remember if this happened during “Anastasia” or “World on Fire”, (Someone remind me!)  but if you thought this show lacked for excitement, you’re wrong.  A fan rushed the stage.  He was successful in making it on the stage.  But the rest of the situation did not go well for the dude.  He was tackled and contained pretty good.  It was crazy to see him being taken off in the background as Slash stood there in the forefront just totally shredding.  It was an amazing show.  I’ve officially seen Slash live!  The guy has not slowed down.