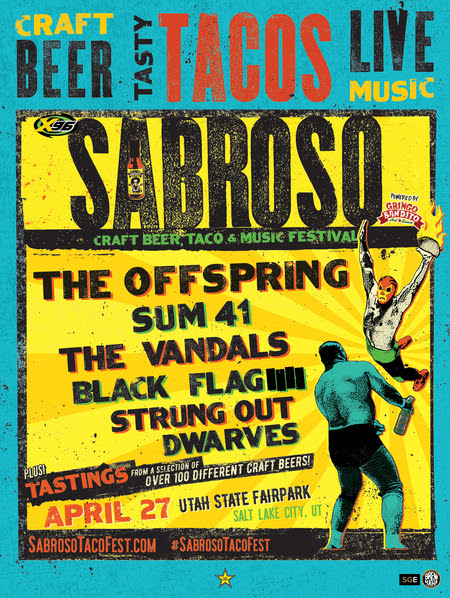 This was the first Sabroso Festival in Utah.  The show is usually based in California so I was excited to see that they were touring the Fest and bringing it to Utah.  I’d say it was a huge success. There were a lot of people at the fairgrounds. The food and drink lines were never short. I was hoping to get a taste of the tacos, but I really didn’t want to miss any of the bands or the lucha libre wrestling.  So I stayed away from the lines. The food must have been really good because one taco cart actually ran out of meat! The crowd seemed to really enjoy the festival. Here’s hoping that Sabroso Festival in Utah is a continuing tradition. Here are some photos of the bands and the festival with a brief rundown on everything that went on.

Dwarves started things off on Saturday afternoon.  They began playing as festival-goers started trickling in.  Because they were the first band on the bill, they didn’t have the largest crowd when they began playing.  But as they played, more and more fans gathered. There were definitely some die hard Dwarves fans who were there early to get a good spot up front.

Lead singer Blag Dahlia kept saying “You know how we do.” throughout the set.  I’ve never seen Dwarves before so I’m not sure if this happens at all their shows, but it certainly stood out at this show.

Dahlia claimed that Dwarves were the only punk band to have a song that was scout Salt Lake City.  The band then performed the song “Salt Lake CIty”. The funny thing about the song is it’s about being willing to do anything but come to Salt Lake City.

The crowd continued to grow as Strung Out took the stage.  The Simi Valley product got the crowd fired up and bassist Chris Aiken had a lot to do with it.  He was so high energy and was flying around the stage for the entire set.  The songs sounded great and the crowd showed their approval in forming a sizeable mosh pit during the set.  Strung Out really got brought this festival to another level.

Black Flag was a band I was really excited to be seeing.  It was a little sad to see that Greg Ginn was the only original member of the band still in Black Flag.  That being said it was pretty great and really fun to see Greg playing guitar in person. I felt like the crowd felt the same as I did.  Just seeing one original member of a legendary punk band was pretty exciting. The crowd roared their approval of every song. Black Flag flew through their songs with so much energy.

The Vandals were really fun.  They’re actually pretty funny on stage.  Guitarist, Warren Fitzgerald was running around everywhere.  He was so goofy on stage. It was interesting because the band would introduce a lot of their songs before they would play them. They played amazing and the crowd really seemed to enjoy their humor.

A wrestling ring had been set up so that in between the band’s sets there would be a lucha libre match going on while the crew changed out one band’s gear and brought in another’s. Lucha Libre is a term used in Mexican professional wrestling.   In most cases, the wrestlers will don a mask and the matches are quickly paced with high flying fast movement. I don’t think I ever thought a wrestling match would fit into a punk festival, but it really did. And it was nice to have something to watch while the next band was being set up.

By the time Sum 41 took the stage the crowd was huge.  If I had to choose, I’d say Sum 41 won the day. Their energy and performance really got the crowd going.  Lead singer Deryck Whibley is one of the best frontmen in punk. He moved all around the stage and seemed to give each section of the crowd.  Bassist, Jason McCaslin matched Whibley in energy, moving all over the place and firing up the crowd. After their first song, they chose some fans from the crowd and invited them to watch the rest of the set from the stage.  That must have been so awesome for those fans. Sum 41 played all their classic songs, and as I mentioned, they were probably the best band at the Festival.

I can’t think of a better band to headline the Sabroso Festival.  The Offspring epitomize Southern California punk. So with this being a taco and beer fest featuring Mexican style wrestling and skate punk, with The Offspring playing, The Utah State Fairgrounds turned into the Huntington Beach Pier.  The Offspring seemed to be really enjoying themselves which lead to the crowd being really into them. The crowd was huge and really involved. The Offspring played a really cool version of “Gone Away”. The song started with just piano and then the entire band joined in during the middle of the song.  The Offspring didn’t fly around the stage like some of the other bands, but they closed the show with some of the best songs of the entire festival.