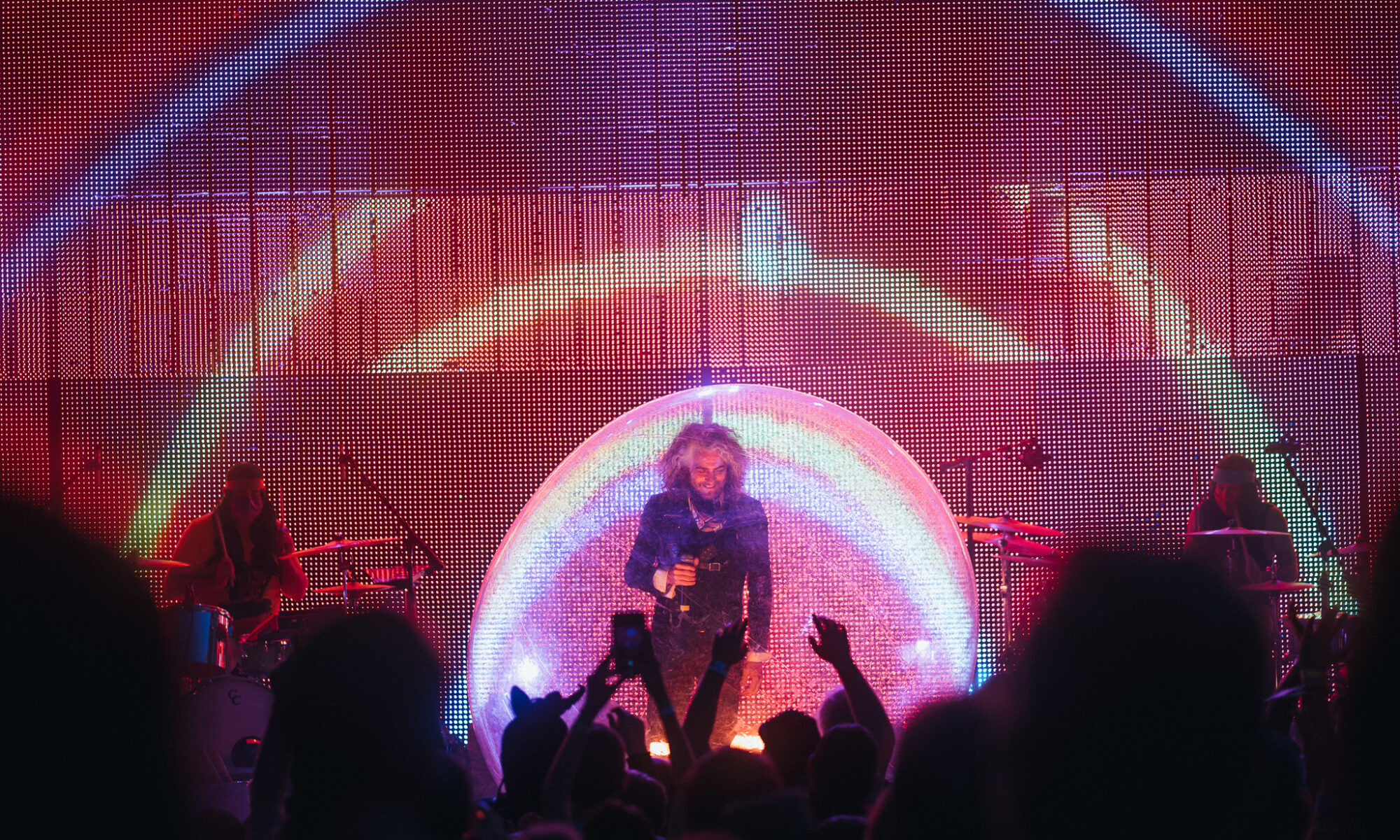 On August 20th, Ogden had a very unique performance by artists Wayne Coyne and The Flaming Lips who were accompanied by Angel Magic and the incredible Dan Deacon. Marking their 3rd time in a row playing the Ogden Twilight series, fans packed the amphitheater with excitement to see the group in full force since their last show in 2019. Doors were open at 5 pm but fans were lining up around the block long before the show started.

The Ogden Amphitheatre was the perfect place for the bands to play. For those who wanted to have a more subtle experience, there were bleachers available towards the top of the amphitheater that was accessible to everyone who wanted to sit back and enjoy the show. For the fans who wanted a more up close and personal experience, there was a VIP area with separate seating closer to the stage. Surrounding the Amphitheater were various drink stations, vendors, and food trucks.

Starting off the night we had synth-pop band Angel Magic, which consists of artists Lauren Smith and Andrew Aguilera. Angel Magic is a local band from SLC and their music reminded me a lot of the soundtrack from the popular TV show Adventure Time. It was super relaxing and they had the crowd grooving and moving the entire set.

Next up we had artist Dan Deacon, who at first seemed pretty shy and a little nervous to play the show. However, within no time Dan had set up and was locked in, ready to put on an amazing set. I personally haven’t listened to this type of music before, so when he started playing the electronic-type music I got very excited. It was super impressive to see how he could compose the different sounds all from one spot, even layering his own vocals to create an electric sounding melody.

Not only was Dan an incredible musician he was also a really great entertainer. “You know having a computer be your only bandmate isn’t always the easiest thing to work with,” he said after having a mishap with his equipment during his second song. Even with the mishap, Dan was quick to resolve the issue and get straight back into the fun. Dan had the entire crowd from the front to the back on their feet and dancing! It was incredible to see due to the fact that there were people ranging from 13-60 years old just absolutely having a blast. He put on such a great show and had the crowd chanting “DEACON DEACON DEACON!” that made for an amazing finale to his set.

There’s nothing like the feeling of excitement while waiting for the final band to play. Fans pushed their way to the front of the barrier to get the best view possible. At this point the entire amphitheater was packed and everyone was on their feet. People were standing shoulder to shoulder eager to see The Flaming Lips take the stage. While everybody waited there were mini beach balls being tossed amongst the crowd. I got smacked in the head a couple times but it was all in good fun. It gave everyone around a good laugh.

As excitement rose within the crowd and the sun was starting to set, the guy next to me told me that this was going to be the best show I’ve ever been to. “These guys have never put on a bad show. Once they take the stage there’s never a dull moment.” I was beyond excited to see what they had to offer.

Finally, the band got on stage and lead singer Wayne exclaimed that the show had yet to start and proceeded to get into a hamster ball. The crowd started laughing and cheering, and although I was a little confused, I thought it was really cool because it was something super different. At first I thought he was going to surf the crowd in the ball, it ended up just being “extra covid precautions” after explaining that he played a show in Oklahoma where every single person was in one.

The band started the show with “At the Movies on Quaaludes” and “Waitin’ for a Superman”. As Wayne described, the first two songs were just warm-ups and the show wouldn’t start until after the two first songs. “This is just a warm up to what the start of a Flaming Lips show looks like.” The crowd was already going crazy the second he took the stage. The band kept saying “You can’t lose your minds just yet. The show has yet to start. Please remain as calm as possible. Thank you for having restraint in these hard times.”  Despite that remark fans were screaming their heads off with excitement. Given its been about 2 years since The Flaming Lips have been to Utah the response was valid.

When I tell you I’ve never seen confetti cannons as big as they had when they played their “first” song “Race for the Prize” I really mean it. Two massive confetti explosions took place on both sides of the stage covering the crowd in confetti. Everybody actually started to lose their minds when they played this track. The energy was unmatched compared to any other concert I’ve been to. The crowd’s reaction was so remarkable. Every fan from the front to the back was singing along, every lyric word by word.

After the song finished all the lights shut off. Then this massive shadow emerged, an instrumental started playing and as the lights started to come back on the band started to play their hit song “ Yoshimi Battles the Pink Robots, Pt. 1”. The lights revealed a massive pink robot blow up that Wayne performed the song around. The crowd’s reaction was super exciting to see. Everyone started pushing against the barrier even more. Once again screaming every lyric to the best of their ability.

The night went on and Wayne went on to say “there is no better place to be than Ogden.” He was proud to say that they’ve been at the past 3 Ogden Twilights and that he’s hoping they can be a part of Ogden Twilight for the next 20 years. Jokingly he exclaimed, “Santa Claus comes every year, so I believe we could come here every year as well.” The band seemed so full of joy to be back in action and put on the most amazing show. They sent the night off with their final song “Sleeping on the Roof” and with that perfect finale Wayne swung a light around while the fans finally got to lose their minds.

All in all this was one of the most fun and unique shows I’ve been to. It was such a great experience to be in a crowd that large again enjoying great music in such an amazing atmosphere.

At the Movies on Quaaludes

Waitin’ for a Superman

Race for the Prize

She Don’t Use Jelly

Will You Return/When You Come Down

Sleeping on the Roof

Click here to listen to The Flaming Lips on Spotify