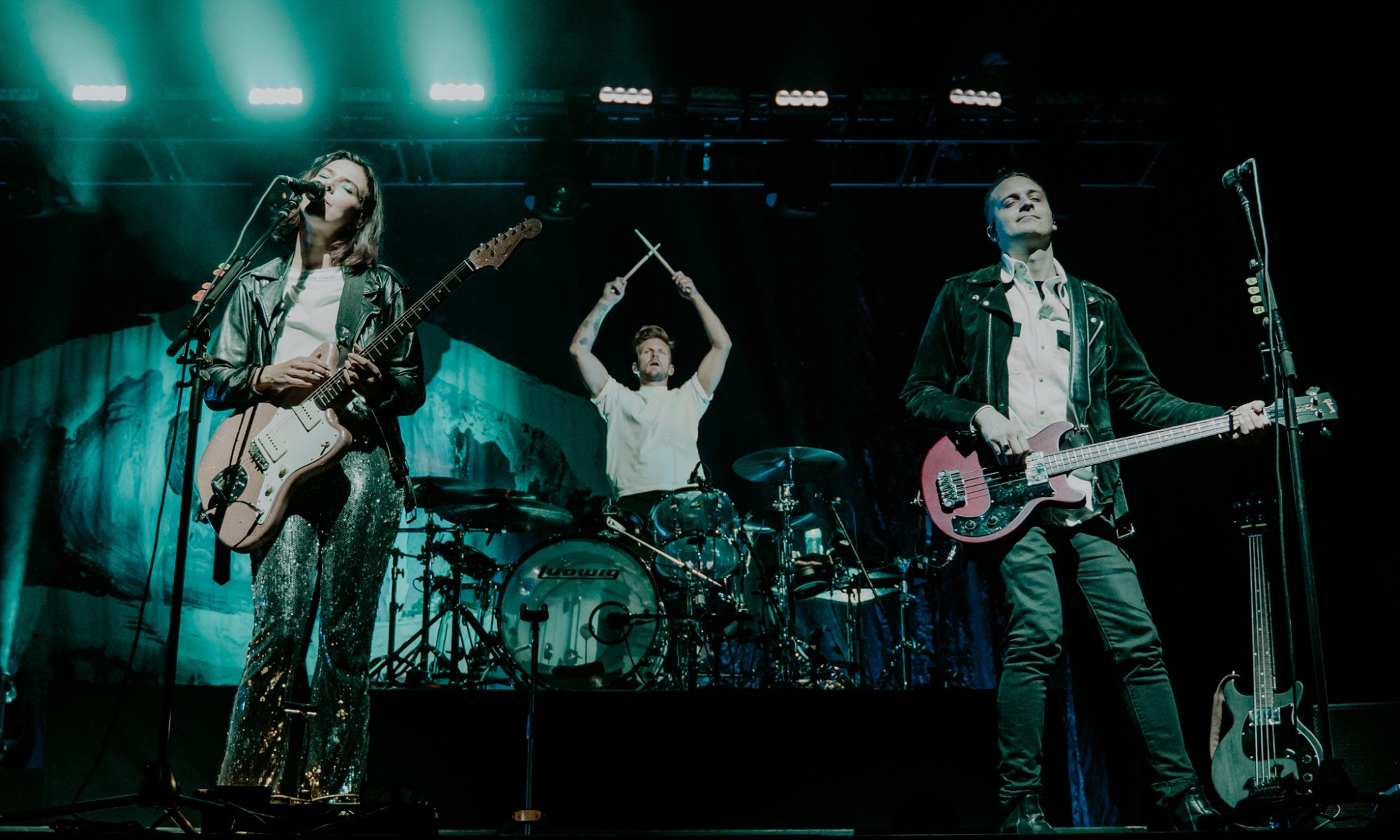 Tuesday night, September 17 was one for the books. The second to last show of the Ogden Twilight Concert Series showcased Of Monsters and Men, with special guests Lower Dens and local spotlight Marny Proudfit. The air was cool and crisp. The season in Utah is slowly turning and fall is on the horizon. People were bundled up in flannels, ready for the outdoor concert. The crowd slowly trickled in throughout the early evening and Marny kicked off the show with a short folk/acoustic set. I was really impressed by her voice and loved that she started the night with just a guitar. Lower Dens took the stage next.

Lower Dens, an American indie pop band from Baltimore, Maryland, is made up of singer Jana Hunter and drummer Nate Nelson.  Formed in 2010, their music has always been deeply personal. With a strong and empowering narrative, Lower Dens’ lyrics will hit home for anyone who feels alienated, out of place or stuck. Their latest album, “The Competition” emphasizes Hunter’s experience with personal identity and the influence of the current political climate in America. Their music blends synth-pop sounds with dark lyrics, talking about the dangers of competition in modern-day society.

On stage, Lower Dens made for an enjoyable, yet mellow act to watch. They played some of their older tunes like “To Die in L.A.” and “Suckers Shangri-La” as well as music off their latest album. “Simple Life” had a sort of ‘pop blended with 70s/80s disco” feel to it. Hunter’s powerful vocal ability in combination with fun dance moves had the crowd swaying. Their guitarist was mesmerizing to watch, playing the majority of the set with his eyes closed. As people gazed towards the stage at the end of their set, the crowd rocked back and forth holding camera flashlights high in the air.

The sun went down, the crowd filled in, and Of Monsters and Men took to the stage amongst screams of “I love you guys!” from the front row. It’s not often that you see such a passionate crowd like the one that was there Tuesday night. One of my favorite things about the Twilight Concert Series, both in Salt Lake City and Ogden, is that it’s very accessible to a wide audience, with affordable tickets and great music. Because of this, the crowd is often filled with a combination of people who love live music and people who truly love the artist playing. It was obvious from the very first beat that the majority of the crowd was there to support Of Monsters and Men, not just a fun night out. They kicked off the night with “Alligator” from their newest album “Fever Dreams” and had the crowd jumping and clapping right out of the gate.

The Icelandic folk/pop band broke into the American music scene in 2012 when “Little Talks” off of their debut album reached international success. Since then, they’ve consistently produced hits with beautiful soundscapes and inspiring, relatable lyrics. Tuesday night they played the perfect blend of old and new music that had fans raving about the concert long after it had ended. One of the most notable parts of the evening was both Nanna Bryndís Hilmarsdóttir and Ragnar Þórhallsson’s incredible voices. The blend of their vocals, especially in songs like “Ahay” and “Sleepwalker”, was captivating and melodically beautiful.

The rest of the set was packed with fan favorites. “Crystals”, an immediately recognizable tune, had the crowd screaming with excitement. The lights dimmed, the crowd hushed, and they played “Lakehouse” off of their first album. “Come on in, come on in where it all begins” hummed throughout the audience. The beat picked up and the lights lit the amphitheater. Arnar Rósenkranz Hilmarsson stood with his drumsticks over his head getting the crowd to clap along. Nanna ran back and forth at the front of the stage as the lyrics resonated throughout the audience.

Up next was the infamous “Little Talks”. As the chorus came around, the crowd shouted in unison “hey” with their fists high in the air. It seemed like every single person in the amphitheater knew the words. I’m not sure I’ve ever been to a concert with so many people singing along in harmony to a single song. It was something really special. They rounded out the set with “Six Weeks” that had the crowd stomping their feet to the beat.

The audience cheered loudly for an encore and the band came back out. In my opinion, this is where Nanna really stole the show. Sitting cross-legged at the front of the stage, her voice resonated out into the audience as she sang the beginning of “Waiting for the Snow”. As she sang “I used to make mountains but then they grew bigger than me… if I said too much, did I love too hard?” the crowd pulled out their flashlights and swayed back and forth. Sonically, this was my favorite part of the show.

They picked the beat back up with their hit, “Dirty Paws” and I’m convinced every person in the audience knew the words. They finished the set with “Yellow Light” off of their first album. As Nanna and Ragnar sang “I dare you to close your eyes and see all the colors in disguise, running into the night, the earth is shaking and I see a light” the crowd cheered loudly. They each ran back and forth at the front of the stage, reaching out to the audience in the front row as the lights went out and the concert ended. The next time Of Monsters and Men are in town I’m sure the show will sell out even faster than it did this time around. I know I’ll be buying a ticket.