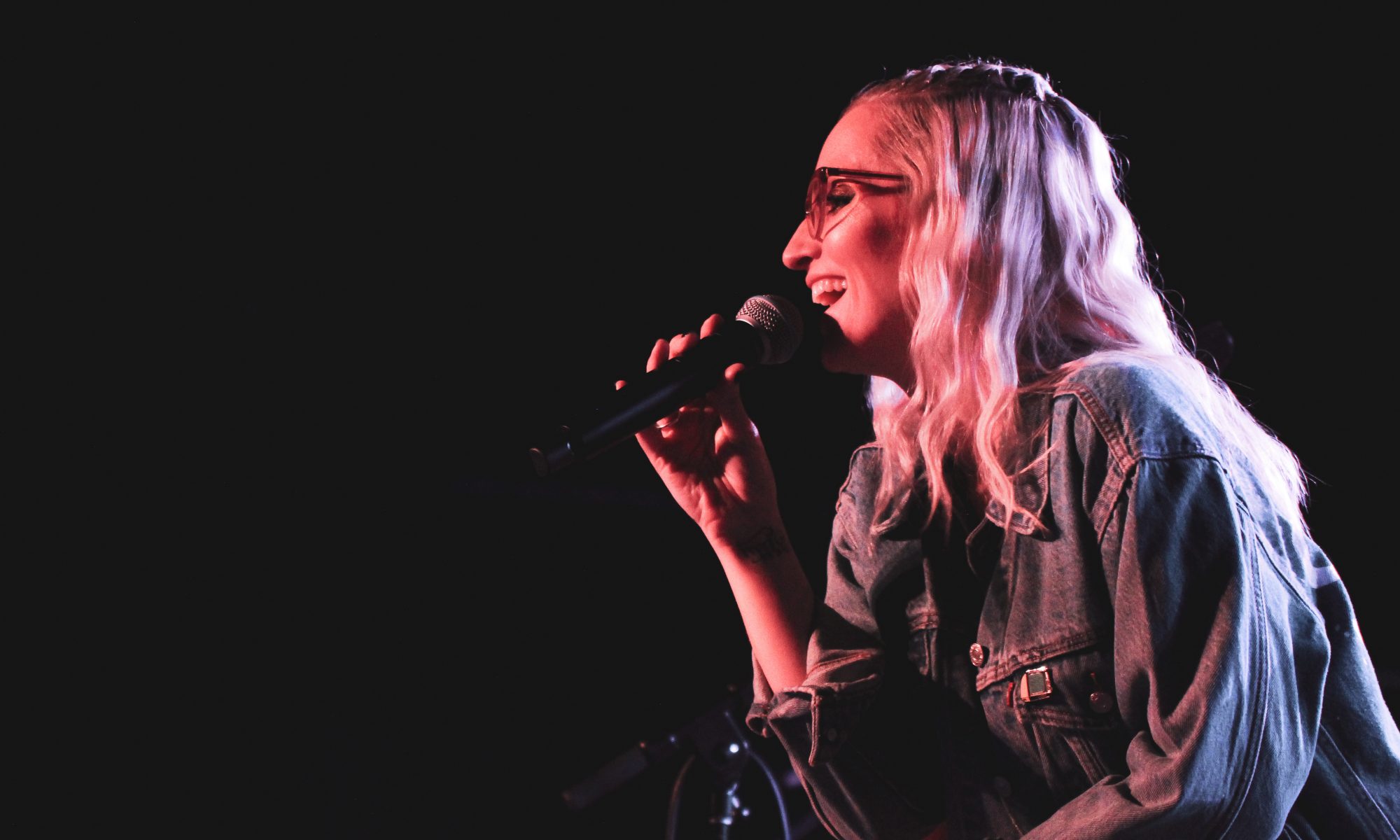 I didn’t have to wait long.  The lights went out and a huge Ingrid Michaelson sign in the font of the Netflix series, Stranger Things appeared.  Shortly after, the band and Michaelson took the stage and opened the show with the first song off of Stranger Songs, “Welcome to the Freak Show”.  She followed with, “Jealous” and “Missing You” also from her latest album. The audience went wild with these new songs.  As hard as it is to believe, I think there were a lot of fans at this concert who knew Michaelson solely from this album.  They were clearly die-hard fans of the series Stranger Things. Ingrid seemed to enjoy seeing the audience embrace these songs that were inspired by her own love of the Science Fiction series.

Ingrid told the audience that she was excited to be playing songs from the Stranger Songs album but also wanted to play some songs that are featured in the show.  The crowd loved hearing that. She then went on to tell the audience that she was going to be playing many of her songs in a more 80s style that fit the latest album and the show it was inspired from.  The audience loved hearing that even more.

Following her first run of Stranger Songs, Ingrid picked up her Ukelele and immediately her long-time fans cheered.  They somehow knew she was about to break into fan favorite “Be OK”. At this point, I had finished taking photos up in the pit and had walked down this long pathway that had been created to separate the 21+ section from the All-Ages section.  As I made my way down the path I could see people on both sides smiling and really getting into the show. These were different smiles though. They were more like smiles that you get when you’re hanging out with one of your closest friends. Michaelson has a way of making you feel like you know her.  It feels like you’re hanging out with her. She’s so charming and totally hilarious. Michaelson noticed the devotion of the crowd and told us how much she likes the Utah crowd. She joked that this audience is not like a New York crowd who just kind of hangs out seemingly uninterested.

After the short visit to her past catalog, she returned to Stranger Songs with “Best Friend” and “Christmas Lights”.  How often are you excited to hear songs off of someone’s ninth album? Not often.  But this album is so good she could have played every song from it. In total, she played seven of the eleven songs on the album.  She stuck with the theme as she played her first 80s cover, Cindy Lauper’s “Time After Time”. I had no idea what she was going to cover, but if you told me Ingrid Michaelson would be covering Cindy Lauper my first thought would be “Perfect”.  And it was perfect. Ingrid told the audience that she guessed that most of the crowd was too young to know who Lauper is, but they should listen to her and know how amazing she is.

Following “Time After Time”, Ingrid Michaelson played a set filled with some of the most successful and loved songs in her career.  The first of which was “The Way I Am”. She explained that the line she wanted to clarify in that song was “I’ll Buy You Rogaine”. She wanted to make sure people knew she didn’t care if she was with someone who was bald.  She was just saying if they were self-conscious, she would go out and buy Rogaine for them. Of course, she told this story in the funniest way possible. Ingrid is as talented a storyteller as she is a singer. And if you’ve ever heard her voice, you know just how impressive it is.

Ingrid shared with us that whenever she puts her setlist together she always thinks about leaving this next song out but never seems to be able to.  Somehow, I knew exactly which song she was talking about and was immediately excited that she had left it in the show. If you’ve never heard Ingrid Michaelson’s cover of “Can’t Help Falling In Love” made famous by Elvis, stop reading this review and go listen to it immediately.  Just promise you’ll come back and finish reading when you’re done. We’ll wait… ok, amazing, right? I know it’s blasphemy but I think I like it better than the original! Forgive me, King! It’s like the song was written for her.

Ingrid also shared with us a song from the upcoming musical adaptation of the movie The Notebook which she is writing the music for.  If the rest of the songs are as good as “Words” then I think Broadway has a hit on its hands. This part of the show ended with Ingrid bringing back the Ukelele and singing her consummate sing-along  “You and I”. Her band stood behind her as she sang with opener Maddie Pope. The audience sang at full voice and stomp, stomp clapped when the moment called for it!

The show reached its peak when Ingrid performed “Young And In Love”, a surprise cover of “Never Ending Story” and the anthemic  “Girls Chase Boys” to end her main set. People were dancing, singing and clapping along to these high energy songs. I loved watching Ingrid and her band interact.  They all looked like they were having a really good time on stage.  The energy inside The Union Events Center could not have been higher at this point.

Michaelson returned to the stage after thunderous applause beckoned her back.  After singing a couple of her earliest hits, “The Chain”, a mashup of “Maybe” & “ Everybody”, Ingrid again surprised the audience by closing he show with a brilliant cover of Madonna’s “Material Girl”.  She could have kept playing but I think the audience was more than satisfied with her show and this really fun closer.

Ingrid Michaelson’s Dramatic Tour has only 16 dates.  Usually, when a tour is that short, Utah is left off the list.  It was clear that this audience was so happy Utah made the cut. Ingrid is one of the most underrated musicians around today. It was nice to be gathered with other people who understood just how fortunate we were to be seeing this amazing talent in concert.