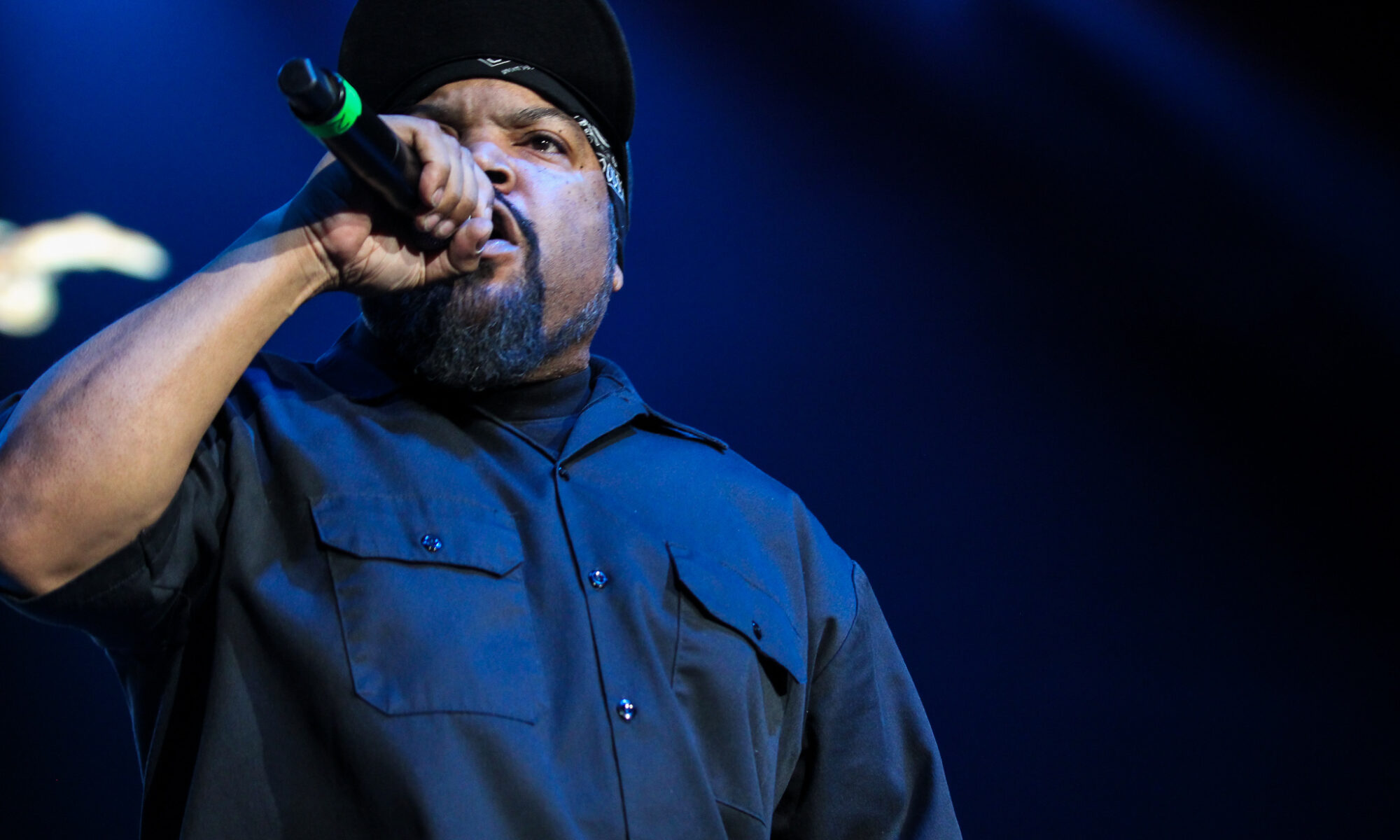 Reviewed and photographed by Kevin Rolfe

When I saw that Ice Cube was headlining the U92 Valentine’s Jam I knew I had to be there. I’ve wanted to see Ice Cube for some time now. He doesn’t come to Utah often, but whenever he has stopped by, I’ve missed him. I remember way back in high school jumping into my friend’s Toyota Celica and listening to NWA full blast. We would only listen to them in the car because then we couldn’t be caught by our parents listening to music with explicit lyrics. Since that time it’s been easy to follow Cube’s career. From his solo albums to his extensive movie career and his venture into the sports world with his Big 3 3 on 3 basketball league, Ice Cube is everywhere! Finally, I was getting the opportunity to see him perform. Anticipation was high.

The night started off with J.J. Fad. They got things started off right. J.J. Fad got the crowd into it and their high energy was infectious. They gave a shout out to one of Ice Cube’s contemporaries, fellow NWA member, Eazy-E. Eazy played a hand in getting J. J. Fad onto a major label which of course sparked their success. Before J. J. Fad departed, they asked the crowd what song they came to hear. The audience shouted and they told the crowd if they wanted to hear the song they came for, everyone had to stand up. Everyone jumped to their feet and the ladies broke into their huge hit, “Supersonic”. What a way to start things off!

Next up were Chicano rappers, N2Deep. Like Ice Cube, like J.J. Fad I remember hearing N2Deep in high school. They were one of those hip hop artists that you knew if you were really ingrained in the genre. I remember feeling cool when one of my classmates asked me if I had heard of N2Deep and I was able to rattle off some song titles. That was important back in the day.

Hearing the beats took me back to the early 90s. But the guys in N2Deep haven’t slowed down. They were moving all over the stage and getting the crowd fired up. I sometimes worry about bands or artists that go on early in a concert with an extensive lineup. Will anyone be there? Will people be engaged? Well, there was nothing to worry about with N2Deep’s set. They knew they were there to get things going and they did their job.

As excited as I was to see Ice Cube, Sugar Hill Gang was a very close second. Sugar Hill Gang is responsible for having the very first rap single break the Top 40. “Rapper’s Delight” debuted in 1980. So this is taking me back to my childhood. I keep thinking, ‘I can’t believe I’m seeing these guys!”. The guys took to the stage to a huge reception from the crowd.

Sugar Hill Gang shared that they were the first hip hop act to break the Top 40 and appear on American Band Stand, they acknowledged the true originals in hip hop. They shared that if Grand Master Flash & The Furious Five didn’t come along, hip hop might still only be in the Bronx. They then announced Melle Mel and Scorpio.

The two members of The Furious Five took the stage and brought the energy of the show to a whole new level. Hearing these guys perform “White Lines” was worth the price of admission! I only wish they would have done the long version. I listened to that song to death when I was a teenager. Which considering the subject matter is hilarious. I knew all the words and did not hold back in rapping terribly along with these legends.

Sugar Hill Gang return and brought their set home with “Apache”. To be honest, I had no idea this was the name of this song. Look up “Apache” on your streaming service and you’ll immediately know this song. The audience was dancing to the hit and did not stop when Sugar Hill Gang concluded their set with none other than, “Rappers Delight”. They performed the shorter version of the song since the original is over fourteen minutes long. I felt like these guys appeared a little too early in the show order. But it was a blast getting to see them. They’ve still got it.

I was probably the least familiar with The Dogg Pound. I was clearly in the minority with this. Daz Dillinger and Kurupt took the stage to a roaring crowd. Before they started performing they gave shout out to their friend, Nate Dogg who passed away in 2011. The West Coast vibe was strong during The Dogg Pound’s set. From the beats to the smooth nature of the performance you could feel the Death Row Records influence in their music. Speaking of, they acknowledged Snoop Dogg’s recent purchase of Death Row.

While I probably knew their music the least, they did not disappoint. I thought it was interesting they were on the same bill as Bone Thugs N Harmony. Back in the day, they had a feud going. They even went back and forth with a dis track or two. I wonder if they’ve called a truce. Or if things were dicey backstage? Maybe they just avoided each other. From what I could tell, there was no mention of the feud by either group.

Other than Sugar Hill Gang, the show felt extremely West Coast. Even with Bone Thugs N Harmony. Who, while originating from Cleveland, have a lot of West Coast ties. Having also worked with Eazy-E, DJ Yella also from NWA, and Tupac, they seemed right at home with these West Coast artists.

The audience rose to a new level when they performed “The Crossroads”. Everyone was up on their feet and feeling it. As I looked around I could see people rapping every word. It was one of the highlights of the night.

The words Ice Cube appeared on the digital screen upstage. The audience cheered excitedly knowing the moment was near. Then just like that, he walked on stage. It was surreal to see him. He was decked out in all black. Would we expect anything else? Ice Cube rocked a black L.A. Dodgers hat with a black bandana underneath. From the get go he was full throttle.

Ice Cube told us “Every time I come to Salt Lake City, y’all show me some love.” Much to the crowd’s delight, Ice stated that he considered Utah smack dab in the middle of the West Coast. Ice Cube then welcomed members of the Utah Jazz to the stage. The Jazz hung out on the side of the stage for the rest of the show. It was pretty cool to see them get into it.

Ice Cube asked the audience how many people were seeing him for the first time. To my surprise a large portion of the crowd, it was their first time seeing him. He told us we were probably thinking this ticket was expensive, I hope he can still do it. Cube then said, “If this is your first time seeing me and you don’t think I can still rock the mic, I got one thing to say to you. You better check yo’ self before you wreck yo’ self!” The crowd went wild as he performed “Check Yo Self”. He can definitely still rock the mic.

The Saturday night crowd was confused when Ice Cube told us, “Nothing like rocking Salt Lake City on a Friday night”. Cube followed with, “Let me tell you something. Whenever you see Ice Cube in person it’s a Mother F^&*ing Friday.” Again, the crowd loved it as he performed “Friday” from his iconic movie of the same name. Ice Cube has such a fun way of getting into songs. He played so many of his hits during his hour and fifteen-minute set. Songs like “It Was a Good Day” and “No Vasaline” were big favorites with the crowd.

Of course, the night wouldn’t have been complete without Ice Cube performing some N.W.A. jams. Ice shared with the crowd that he met Dr. Dre when he was 14 and joined N.W.A. when he was 16. He told the audience if they had a weak heart now was the time to hit the exits because it was about to get hardcore. Just like it was when I saw him take the stage, it was surreal to hear “Straight Outta Compton” live. Even if it was just from one member of N.W.A. It was awesome.

The highlight of the set was when Ice Cube shared that Utah Jazz Sixth Man of the Year, Jordan Clarkson requested the song, “Go to Church”. A song Cube recorded with Snoop Dogg and Lil Jon. As Ice Cube performed the song, Clarkson and the rest of the Jazz moved from the side of the stage to fill out the whole stage. Of course, the crowd, filled with Utah Jazz fans, loved it. Jordan Clarkson continued to make his way downstage dancing in front of the excited crowd.

U92 did a great job putting this show together. It was a jam-packed lineup of some of the best old-school hip hop stars. Despite his movies, commercials, and business ventures, Ice Cube hasn’t lost a step when it comes to rhyming and rocking the mic.