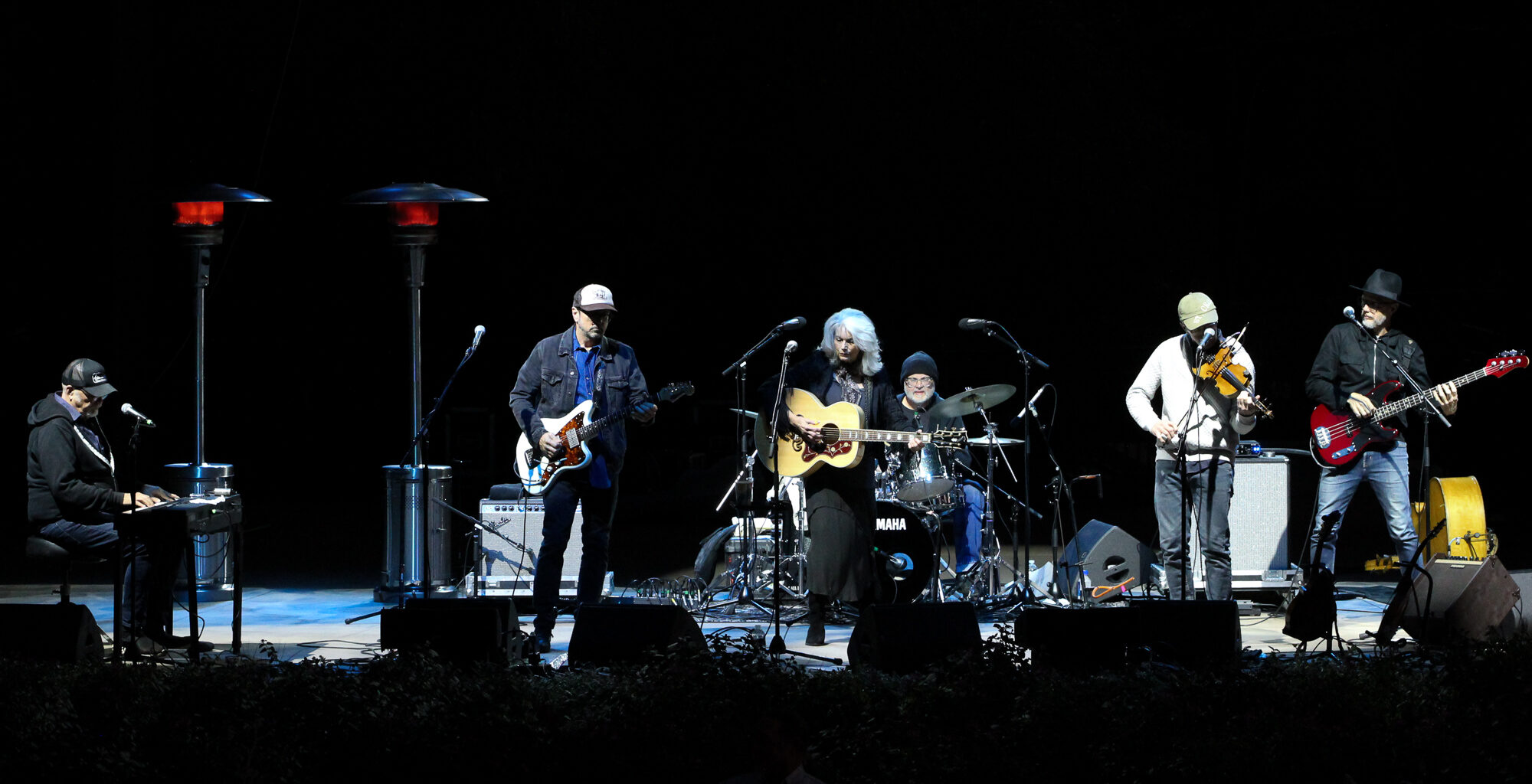 Similar to the JJ Grey & Mofro concert a couple of nights earlier, the forecast was calling for chilly temperatures.  So much so that the start time was moved up to ensure the audience and performers would be out of the frost air before it became too cold.  When I walked into the amphitheater I did notice all blankets, coats, and steam from coffee cups, but I also noticed the same smiles, the same high spirits as patrons conversed one with another.  They all looked the same as they did when the nights were warm. That told me they were not going to let the dropping temperature affect their night.

Harris took the stage to a loud ovation.  The seated audience waited on bated breath for her to begin.  When the music started and Emmylou began singing there was another cheer from the audience.  It’s not easy to sing on a cold night, but with a hot cup of tea beside her, Emmylou Harris sounded great.  Harris moved through favorite songs such as “Orphan Girl” and “Love and Happiness”. We were immediately reminded of what a talent she is.  She brought an exceptional band with her, and they would bring the show to a higher level the entire evening.

Before performing, “Get Up John” Harris shared that it was originally an instrumental piece written by Bluegrass pioneer, Bill Monroe.  Marty Stuart and Jerry Sullivan later added words.  Emmylou and the boys then performed this song. Harmonizing beautifully and beginning to hit their stride in the show, the audience began to warm up more and more, both figuratively and literally!  I love Bluegrass, so I was excited to hear this song.  It was a huge highlight for me.  It was for Harris as well.  When the song was over she said, “I sure do love playing that song!”.

In between songs, when Emmylou Harris was switching out guitars and getting ready to introduce the next song, a fan yelled out, “Welcome Back to Utah!”  The crowd shared that sentiment with a warm applause.  Harris responded with, “I’m proud to be here. As Minnie Pearl would say.”. Harris then shared with us that she has enjoyed every stop she’s made in Utah over the years.

Harris went on to play the beautifully performed “ Michelangelo” and “Calling My Children Home”.  The latter she performed acapella with her and the band surrounding one mic. It was amazing how a venue the size of Red Butte Garden, with well over three thousand people, who generally chat, A LOT during concerts, can be totally stopped in their tracks the way they were for “Calling My Children Home”. It was so silent in that amphitheater.  I looked out across the valley and imagined that I could hear the traffic from the freeway, which is miles away.  It was not only a huge indicator of how captivating this moment in the concert was but also a huge sign of respect to be hearing a music legend like Emmylou Harris performing in the simplest form.  Great moment.

It was clear that Emmylou was getting a little cold.  Sher tea was now lukewarm and the night chill was ever-present.  Members of the audience pointed out that there were a few space heaters lining the stage. She wasn’t near any of them. So she had no idea they were there. Harris didn’t seem deterred by the cold. And she didn’t seem to rush the show because of it.

She told her stories with the same pace and detail people have always loved her for.  She shared that she was a huge Meryl Haggard fan and that it was a big loss to Country Music when he died. Emmylou said that she wanted to sing her favorite song of his.  It’s her favorite because it’s one of the saddest.  If you weren’t aware, Emmylou Harris is a big fan of the sad song.  So many of the songs she’d introduce she’d include the reason she loved it was because it was so sad.  She proceeded to perform “Kern River”.

Emmylou’s lukewarm tea was replaced. And just like that piping hot new cup, the entire show heated up. A stretch of upbeat Bluegrass and Country songs got the audience to rise to their feet.  During one song, Emmylou began singing and I quickly noticed her looking at the band and seeming a bit confused. About 20 seconds into the song she stopped and said, “Do you know what I just did?  I’m singing the wrong song.”.  She mentioned that the song she was singing had the same tempo as the song she was supposed to be singing.  The song she was meant to sing was Graham Parson’s,  “Ooh Las Vegas”.  The audience just laughed and embraced the flub and the concert continued as if nothing had happened.

Harris performed Billy Joe Shaver’s, “Old Five and Dimers Like Me”.  She told us that she felt like she had to wait until she was at least 60 to perform this song.  She didn’t think she had the cred.  Well, she certainly pulled the song off.  I loved her version so much.  The crowd shared my sentiment.  She received generous applause.  Following another crowd favorite, “Save The Last Dance For Me”  Harris departed backstage.  On her way offstage, Emmylou raised her hands near the space heaters.

I got the sense that the audience knew this was their final time cheering someone back to the stage for an encore. It felt especially loud.  But it is very possible that it was all for Emmylou.  She definitely deserved that kind of ovation.  When she returned she told us that we were a great crowd.  “We love to play and sing, but without people coming to see us, well, it’s just soundcheck!”  She then played one of my favorite songs of hers, “Born to Run”.  It’s amazing that two great songs can have the same song title.  Anyway, the audience once again stood and danced and embraced the moment.

The night ended with the touching, “Together Again”.  This song struck a chord with so many in attendance because so many of the fans who had spent many amazing nights at Red Butte Garden together would be saying goodbye until next season.  In a way, it felt like the end of a school year.  People were hugging, swaying, and singing along during this song.

As this song played out over the farewells and recollections of great summer memories, I couldn’t help but think of what a small miracle it was that we all made it to the final night of the series.  Red Butte Garden only had to cancel one show.  That’s a huge feat when you think that they packed 22 shows into just two months! So much respect for all those who did their best to keep us safe and keep live music alive during these crazy times.

Following, “Together Again”, Emmylou said her final goodbyes.  “Stay safe everyone.  We’ll see you back again, here!”  Emmylou Harris was the perfect artist to close out this remarkable series.  She’s a legend and someone that I’m so happy to have finally seen live.  And to all those Red Butte regulars, until we’re “Together Again”, stay safe and have a wonderful winter!