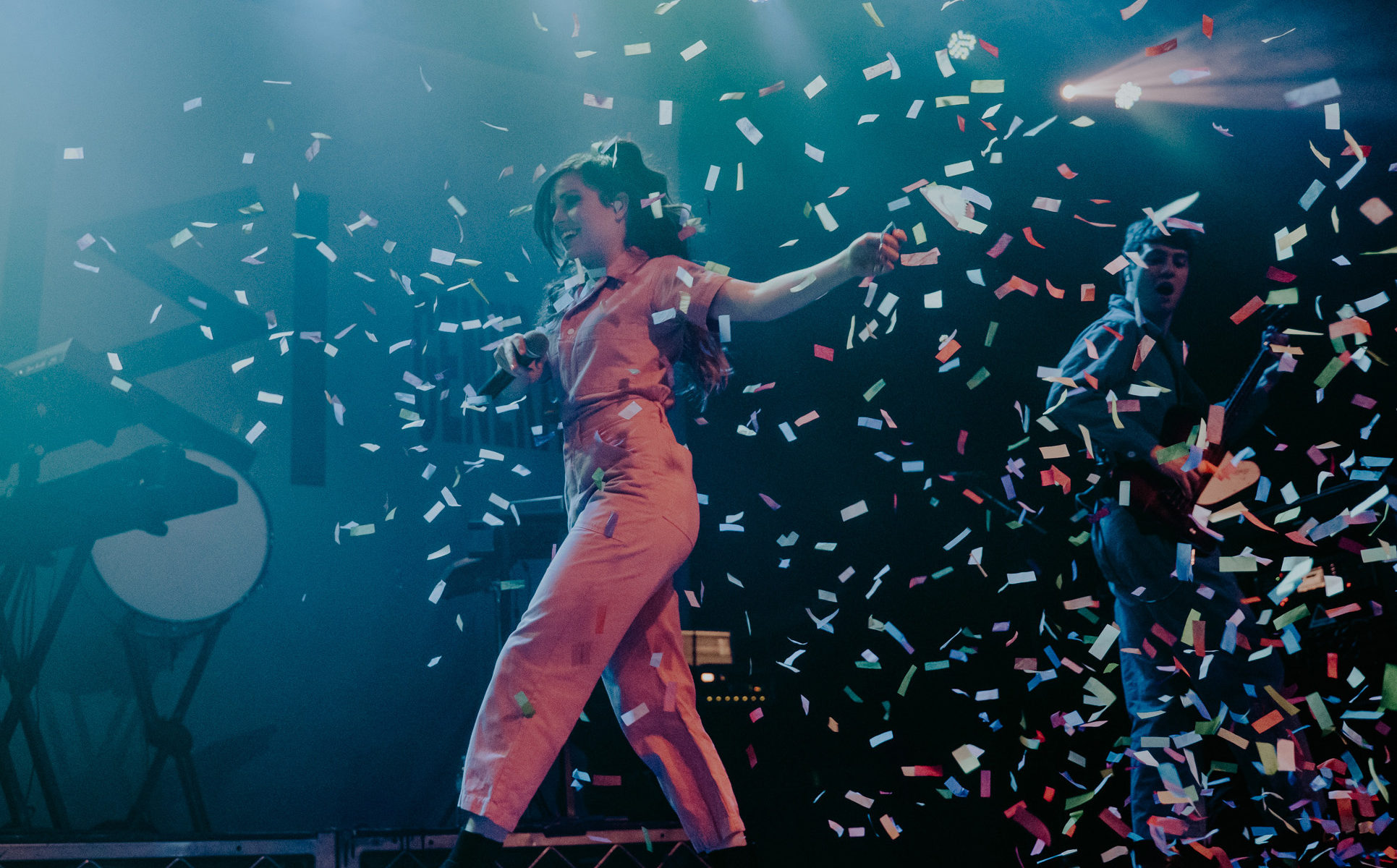 Echosmith, the sibling trio known for radio hits “Cool Kids” and “Bright” brought Weathers and Jayden Bartels to the Complex on Thursday night. A combination of rock and pop filled the venue and brought a contrast of moody and bright performances made for an interesting and entertaining night.

Jayden Bartels opened the show with a short acoustic set. Her music mentor played guitar and she strummed the ukulele as she sang a few of her hits. Bartels is a 15-year-old actress, dancer, and singer from Los Angeles, California. Her pop hits, like “Gameboy” and “Galaxy” were catchy and she had the crowd on her side. She came across as relatable and her excitement about being part of this tour had the crowd excited too. They cheered and clapped along as she covered Lizzo’s “Truth Hurts” and she wrapped up her set by thanking the crowd for their energy.

Next, Weathers took the stage and it was clear that this performance would not be like the previous. Moody and dark, the boys were silhouetted in red light as Cole Carson started to play the drums. The crowded roared as Cameron Boyer, the frontman and lead singer, walked to the middle of the stage and suddenly a high energy performance had the crowd buzzing. I could tell we were in for a treat. Boyer’s demeanor was captivating and I found myself in awe of his stage presence. He danced electrically across the stage and his vocals were strong and powerful. He belted “Always Tired” as Cameron Olsen shredded the guitar and the crowd danced along.

Boyer paused in between songs to pump up the audience. “Want to sing along with us?” he asked the crowd as they screamed. Weathers’ fans knew exactly what was coming. “Here we go, Salt Lake!” The audience screamed loud and proud – “I take my pills and I’m happy all the time, I’m happy all the time, happy all the time” as the drums came in to “Happy Pills” and the boys went crazy on stage. This song has become an anthem in the Weathers community and for good reason. It’s catchy and relatable to their young audience. They went on to play a few more of their most popular songs including “Dirty Money”. “We love you Weathers!” yelled someone from the crowd.

As the band started to play “Lonely Vampire” Boyers said, “if you know Weathers, you know we like to party… Let’s get down low, when the chorus comes around we’re gonna jump up and lose our minds”. The crowd got real low and the anticipation was high. As the chorus came back around the crowd jumped, hands high in the air, and went crazy. And Boyer was right. The night felt like a giant party and the band had the ability to keep the crowd engaged and happy. They ended their night with “I’m Not Okay” and the crowd sang every word.

The alternative rock band blends retro and indie sounds while still feeling mainstream. Their debut album “Kids in the Night” was released back in 2018 to high praise from those who heard it. High energy performances like this are often some of my favorite. But, what made Weathers special was that their captivating performance was combined with catchy lyrics and melodies and impressive musical ability. Although still small, this band is one to watch.

Echosmith had a hard act to follow, but they kicked off the night with a high energy performance of their own. As the band took the stage they sent giant balloons into the audience filled with confetti. Sydney Sierota, the lead singer, danced around on stage and popped the balloons sending confetti all over the front of the crowd. It was a fun way to kick off the performance and had the audience excited from the start.

They started the set with a few fan favorites including “Lost Somebody” and “Bright”. The crowd sang along and waved flashlights in the air. Sydney paused often throughout the night to address the audience and express her thanks to the fans. Four songs in, she paused to say that the energy from the crowd was the best yet on tour. She went on to talk about the importance of vulnerability on the new album, mentioning the large number of stories she’s heard from fans about how these songs have made them feel a little less alone. With a smile, she said, “thank you for sharing your stories and thank you for being here with us”.

The American indie pop band originally formed as a quartet of siblings back in 2009. Today, the band consists of Sydney (vocals), Noah (bass), and Graham Sierota (drums), after their eldest brother left the group to be with his family. With their father as the band manager, the importance of family was clear. They went on to play “Everyone cries” with their father on stage playing the keyboard.
They played both “Follow you”, a tribute to Sydney’s husband, and “Last Forever”. The crowd seemed to lose a bit of energy throughout the night but they were able to gain momentum back when they played “Talking Dreams” and their version of Dua Lipa’s “Don’t Stop Now”. The crowd cheered loudly for an encore and Echosmith wrapped the night up with “Lonely Generation” and, of course, “Cool Kids”.

The night was filled with good music, high energy performances, and a small but passionate crowd. As I drove home I didn’t find myself turning on Echosmith like I thought I might, but rather playing “Happy Pills” from the Weathers, wishing for more.