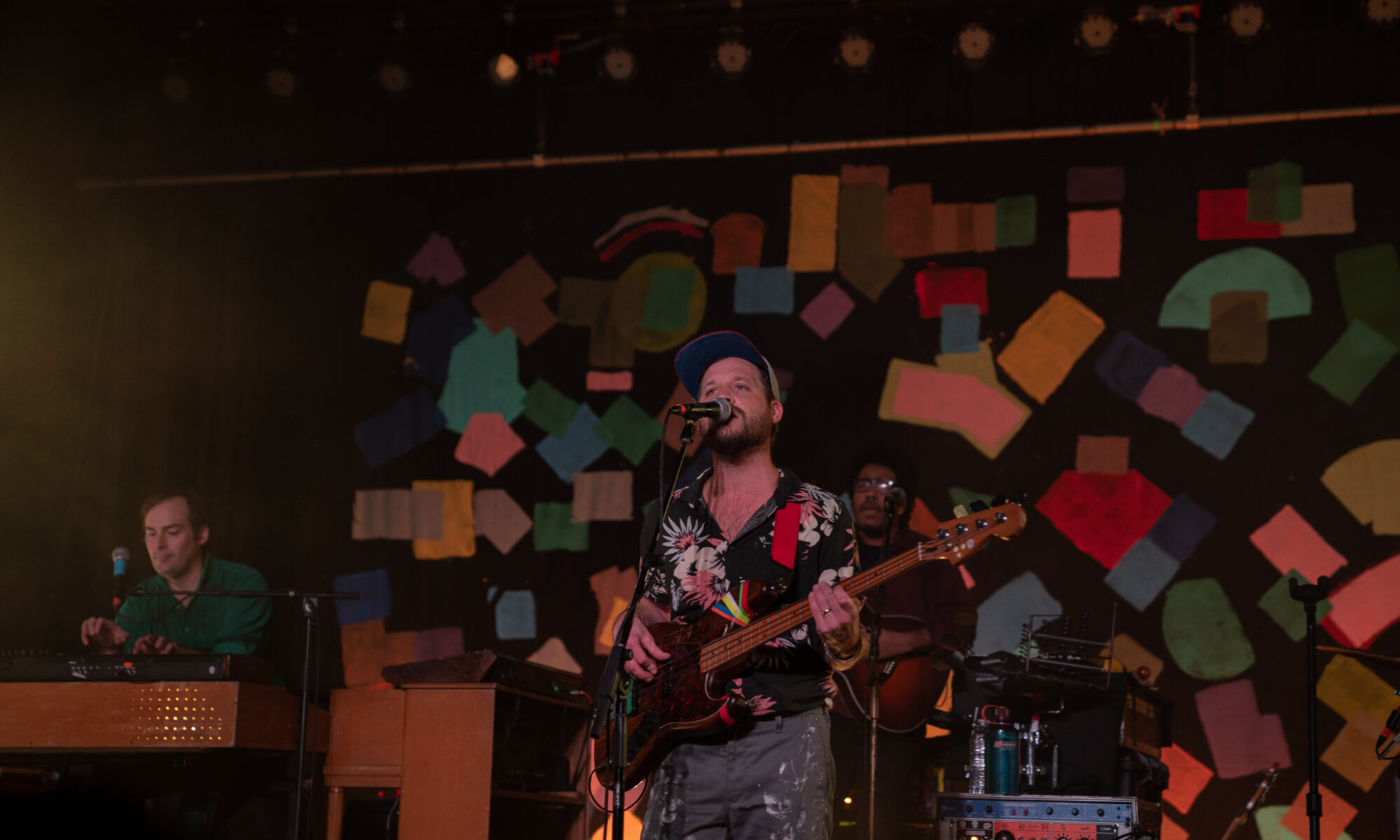 Tōth (led by vocalist and multi-instrumentalist Alex Toth of Rubblebucket fame) set a perfectly indie mood for the sold-out Dr. Dog show on a cool fall evening at The Union. Alongside Alex, drummer Jeremy Gustin and bassist Ryan Dugre sported brightly colored coveralls that matched the headliner’s Mondrian-like backdrop, a colorful dissonance that complimented the swirling vocals of the band. As the venue slowly reached capacity, stragglers were welcomed by Alex’s trumpet solos and the resulting enthusiastic cheers of the crowd.

Thanking the crowd throughout the set, the threepiece forced everyone to bob up and down in synchronicity with the fast-paced beat of songs like “I Might Be” and sway with the dialed-down rhythm of “Copilot.” Since releasing his first single in 2018, Toth has been building up a name for himself among the alternative scene, touring with the likes of Lady Lamb and Caroline Rose prior to supporting Dr. Dog. With whistles, thoughtful trumpet, moody lyrics, and a quirky finale topped off by the group donning fairy wings and encouraging the crowd to sing harmony, Alex and co. certainly earned some new followers among the audience.

That Salt Lake City audience is likely the last of its kind for Dr. Dog. Salt Lake was the 30th city on their “Last Tour,” which the group announced in June would mark the end of their touring days. What originally started as a side project in the early 2000’s for founding members Toby Leaman and Scott McMicken turned into thirteen studio albums, two live albums, multiple compilations, and more than a few EPs; it would seem that the group has certainly earned a break from the road. There probably isn’t much that hasn’t already been said about Dr. Dog, which makes seeing them live and in person during their last cross-country tour that much more special.

Though The Union was a new setting for the band, the dedicated fans who watched them rise through the ranks of smaller SLC venues showed up in full force, packing every square inch of the building’s two stories. The room swelled with excitement as drummer Eric Slick worked in a beat and the stage fell dark. An ominous organ courtesy Zach Miller broke through the screams of excitement to introduce bassist Leaman’s infamously gritty vocals and their spooky opening song, “The Beach.”

The lyrics of “The Beach” served as a warning, but the room lightened with the first notes of “Where’d All the Time Go?” An obvious crowd favorite, the lyrics were thrown right back at Leaman and McMicken, whose guitar smoothly sang alongside the bittersweet theme. Providing the quintessential bridge guitar riff was Frank McElroy, who donned his trademark sunglasses the entire set.

Michael Libramento defended his reputation as the Swiss Army Knife of musicians, stealing the show by backing up the band on nearly every instrument known to man with an absolutely infectious performance. He picked up an acoustic guitar for “Survive,” which had everyone singing and prompted the first crowd surfer of the night. In keeping with the dark-yet-catchy motif, Libramento grabbed some maracas for “Heavy Light.” Miller took the liberty of dramatically accenting the track, which became a much longer version as McElroy took a stab at a response and built up the suspense.

A lone cigarette lighter appeared in the crowd during “Buzzing in the Light,” which featured a VHS-like intro for synth and a lap steel for Libramento. Everyone sang along to the “mmm-bop-bop-bops” of “The Breeze” and with hands in the air kept in time with the dramatically shifting lights for “Black-Red,” a duo in the setlist that demonstrated the band’s ability to seamlessly genre-bend.

Fittingly, Leaman dedicated “Jackie Wants a Black Eye” to the crowd after thanking them for coming out. “WE’RE ALL IN IT TOGETHER NOW” and “ARE WE MADLY INSANE” shouted the crowd alongside the group, energetically clapping with the song’s ultra-relatable lyrics: When yesterday’s love defines you / And today that love is gone / Tomorrow keeps you guessing / The roller coaster is rolling on. The show kept rolling on, with “Could’ve Happened to Me” and “The Rabbit, the Bat & The Reindeer,” the concertgoers nearest the stage jumping and clapping long and loud enough to cause a ripple of dancing that made its way throughout the crowd.

Miller came to the front of the stage and McMicken handed his guitar to the keyboardist, causing the room to go absolutely wild. By this point in the set, a section of the audience wielding glowsticks had emerged and were distributing them to their fellow fans—one younger attendee wore a glowing crown as she hopped on her dad’s shoulders during the first half of “Lonesome.” Libramento had picked up a triangle and was dancing alongside McMicken, who was jumping around the stage with a tambourine. Everyone, young and old, glowstick-adorned and not, leaned back and shouted at the top of their lungs during the song’s “heys!” while light lit the venue to brightly punctuate the moment.

“Listening In” earned the band a stage crasher, who fought back but eventually gave in to the security guard’s hands-on suggestion to vacate the stage. “You guys are partying hard and I love it! Just be careful,” Leaman urged the crowd after the song’s conclusion. The energy of the audience stayed relatively calm other than the few who decided to try their luck at moshing briefly during “Army of the Ancients” and “That Old Black Hole.”

The show reached its first climax with “Nellie,” the words immediately echoing throughout the air at almost the same decibel level of the band itself. Live, Miller’s keys beautifully decorated the anthem, which left the crowd in a cliffhanger as the song ended and the group exited. The entire venue was already shouting for one more song as soon as the lights went down. Howls and whistled coaxed the headliners back on stage and into “Coming out of the Darkness.”

Alex Toth also appeared, providing the trumpet accompaniment for the first song of the encore before the group’s next five songs of the night. Included in these were “Under the Wheels” and “Go Out Fighting.” Miller and McElroy provided their own spin on portions of each track, eliciting shouts of approval from the attendees. The audience soaked up every moment of what some might say was an entire second set by matching the energy of the artists—never taking a break from the dancing, shouting in between songs, and clapping along—mingling with McMicken and Leaman’s vocals on “These Days” and “Shadow People.”

For a climatic finale, the band flubbed on the beginning counts of “Heart It Races,” which made the first few lyrics of the song that much more satisfying for the crowd. After some brief cheers and a comment from Leaman acknowledging the mistake, everyone present was clapping along with McElroy’s guitar and Slick’s drums. The 14-year-old song obviously hadn’t aged a bit, and the deafening applause from the crowd that followed at the end of the band’s set confirmed that their music will continue to play on repeat for generations of listeners to come. Whether live and in person or channeled through the ether, Dr. Dog isn’t going away anytime soon.

The Beach
Where’d All the Time Go?
Survive
Heavy Light
Buzzing in the Light
The Breeze
Black-Red
The Pretender
Jackie Wants a Black Eye
Could’ve Happened to Me
The Rabbit, the Bat & The Reindeer
Lonesome
Listening In
Army of Ancients
That Old Black Hole
Nellie
Coming out of the Darkness
Under the Wheels
Go Out Fighting
These Days
Shadow People
Heart It Races