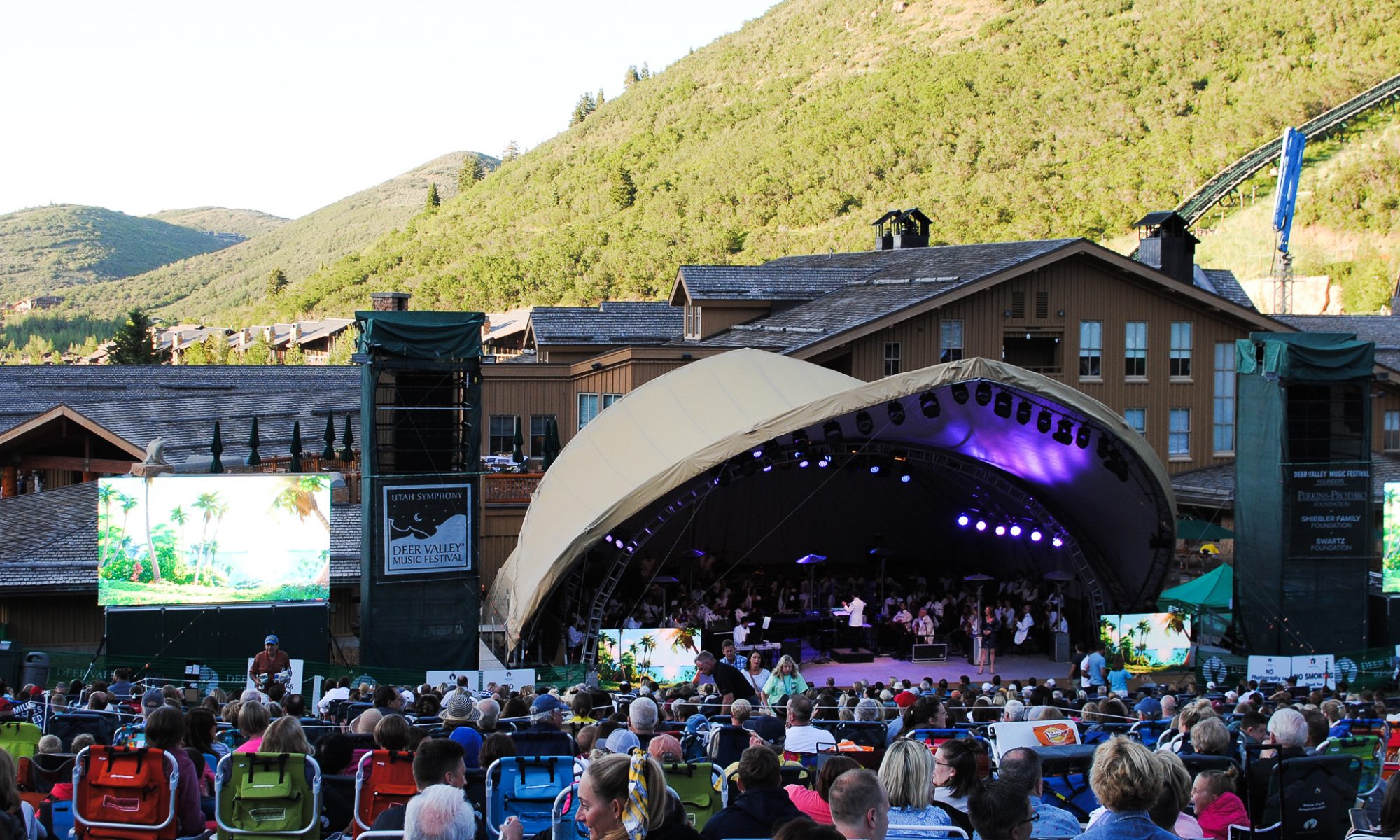 By: Kevin Rolfe with contributions by Kerriann Haycock

It was the perfect evening for an outdoor concert!  Escaping the heat, heading up to Deer Valley, throwing down a couple of chairs and a blanket, eating and drinking with friends, what could be more perfect?  How about a concert full of the greatest music from the Disney songbook? Sounds like the perfect evening! As part of their Deer Valley Music Festival series, the Utah Symphony presented Disney in Concert: A Magical Celebration at the Snow Park Outdoor Amphitheater.

The concert featured for amazing vocalists, Andrea Ross, Whitney Clair Kaufman, Aaron Phillips, and Andrew Johnson. While I was only familiar with one of the artists they all brought an immense level of talent to the concert.  The vocalist I was familiar with, Andrea Ross, came to my attention many years ago when she played the role of Swallow in the Andrew Lloyd Webber production of Whistle Down the Wind.  I was really excited to get to see her perform live for the first time, and she, just like the other vocalists, did not disappoint.  Disney songs are great, but when sung well they can take us to another place. Dare I say, “A wondrous place, for you and me”? I’m sorry.  I have to apologize for that. But I really couldn’t help myself.

There was a family-friendly atmosphere throughout the amphitheater.  Children were dressed up in as their favorite Disney characters and I even saw some parents decked out in their own Disney costumes.  Children young and old seemed to really love the concert. I could see kids from all over singing along and dancing to the music. It was really cute.

For the younger children, songs from Moana and Frozen were crowd favorites.  However, I loved seeing the faces of the adults, or kids at heart, when pieces from Disney classics were performed.  Songs from the greats like Cinderella and Lady and the Tramp brought huge smiles to people in the audience. I thought there was a great mixture between the classic and current songs from Disney’s catalog.  It can’t be easy to choose a setlist for a show like this. Disney has so many great songs. I also thought it was a really smart idea to have clips of the movie from which a particular song was performed being played on the digital screens.  Especially if you were too far to see the faces of the vocalists.

The Utah Symphony was stunning as always.  It was hard to believe that this show wasn’t prerecorded.  I’ve seen them play at several venues, but Deer Valley is probably my favorite place to see them.  The sound is surprisingly excellent there. Maybe the layout of the surrounding mountain peaks is what provides the lovely acoustics.  They sounded perfect up close (While taking photos) and way up the mountainside (Where we watched the performance). It’s such a great venue, and the Utah Symphony sounded amazing at this concert.

The show concluded with the 2018 Acadamey Award-winning song, “Remember Me” from Coco which was followed by “The Lion King Suite”.  The Utah Symphony could perform another Disney In Concert next week and choose all different songs and I bet it would be as well attended as this concert was.  Disney and the Utah Symphony are a winning combination. People seemed to leave the show in a great mood. A lovely evening was had by all. Including me!