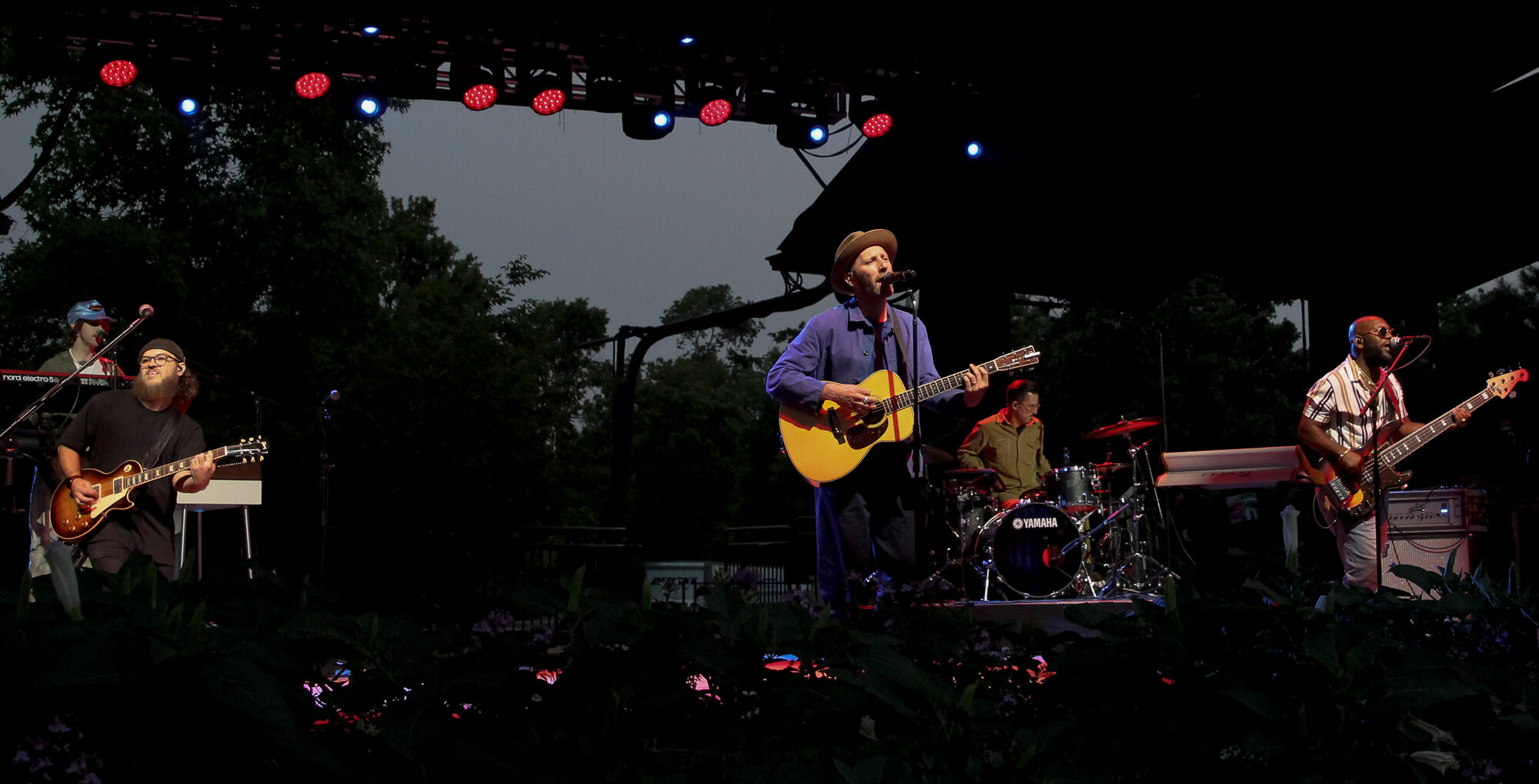 Keane was incredible.  My friend even agrees.  I text him before this concert I’m now reviewing and he stated that Keane was, “Unreal” that night.  It’s true and as huge as that memory is for me with that band, I left that historic venue never forgetting the name, Mat Kearney.

So here I was twelve years later at another fantastic venue, Red Butte Garden, seeing that very Mat Kearney headline a sold-out show of his own.  And the night was as memorable as it gets!  For one reason or another, I hadn’t seen Kearney since that incredible evening in Hollywood.  It seems like I would have seen this guy multiple times by now.  Well whatever the reasons were, I was happy to finally get to see him once again.

It was a beautiful night at Red Butte Garden Amphitheater.  That’s the great thing about Red Butte.  It was a really hot day, pretty much all day.  But you get up to Red Butte Garden and it seems like by the time the headliner takes the stage the weather is perfect.  And it was absolutely perfect.

Once his bandmates were in position, Matt Kearney took the stage and started the show with “Powerless”, the opening track of his 2021 release January Flower.  It’s a great song to open an album, just like it was to open the show.  It starts with Kearney and his guitar and then his band joins in.  Once everyone on the stage was involved, the audience was already in motion.  Fans were dancing, clapping, and singing along.  We were in for a good night.

Kearney had such a clear voice.  And his annunciation was excellent.  Not something I usually look for.  But it stood out so much.  I understood every word, even in songs I hadn’t heard before.  I think it’s a real gift to be able to sing your lyrics and get the message of these songs across so clearly.  Kearney is a talented singer and his voice has only improved over the years.

I found Mat Kearney to be engaging, heartfelt, and really funny.  He shared that he was really excited when he had heard that this concert sold out in just a few minutes.  He said, “Let’s just do this again.  Wanna do this tomorrow?  I could do this for a month!  I love this place.”  If the Utah audience wasn’t already won over by the performance, those comments did the trick.

He mentioned that he had missed Utah when he was on his acoustic tour which led to some sarcastic boos from the audience.  He retorted with “But I’m here now so don’t boo me!”.  The audience laughed and cheered his return to Utah.

He also shared a story about a line in his song “One Black Sheep”. The line mentions that he was “Conference player of the week” in reference to his soccer playing days at Chico State University.  He told a hilarious story that he wanted to clarify that line because he felt it made him seem arrogant.  He shared that he was in fact the player of the week, but told us that it was in the first week of his freshman year.  His self-deprecating humor made for a great story and fun insight on a fan favorite song.

As the night rolled along I couldn’t help but notice how happy the fans were.  I’ve noticed that quite a bit in the shows I’ve attended thus far in 2021.  Concert fans are so glad to be back that it totally shows on their face.

Throughout the night Mat Kearney would take the microphone off the stand and move past the lights to the far reaches of the stage.  The highlight of the evening took place when the stage could no longer contain him and he ran into the audience.  He danced and sang through the entire crowd.  He started on one end went all the way around the other then moved his way along the front of the crowd but up the same steps he originally flew down. The energy was high the entire night, but at that moment we hit the show’s climax. It was an incredibly fun moment.

Kearney returned to the stage after an encore break and closed the night with the huge favorite “Nothing Left to Lose”.  A song he also brilliantly and memorably performed way back in 2009 at the Hollywood Palladium.  Arms were swaying as people sang along.  I was standing on the side patio where I had a great view of the stage and the audience.  Eavesdropping, I overheard the guy next to me saying, “There’s no way this can get old for him.”.  I have to agree.  Mat Kearney looked like he was having so much fun.  And I imagine it never gets old for him.  It seemed pretty clear to me that he’ll never get old to his fans.