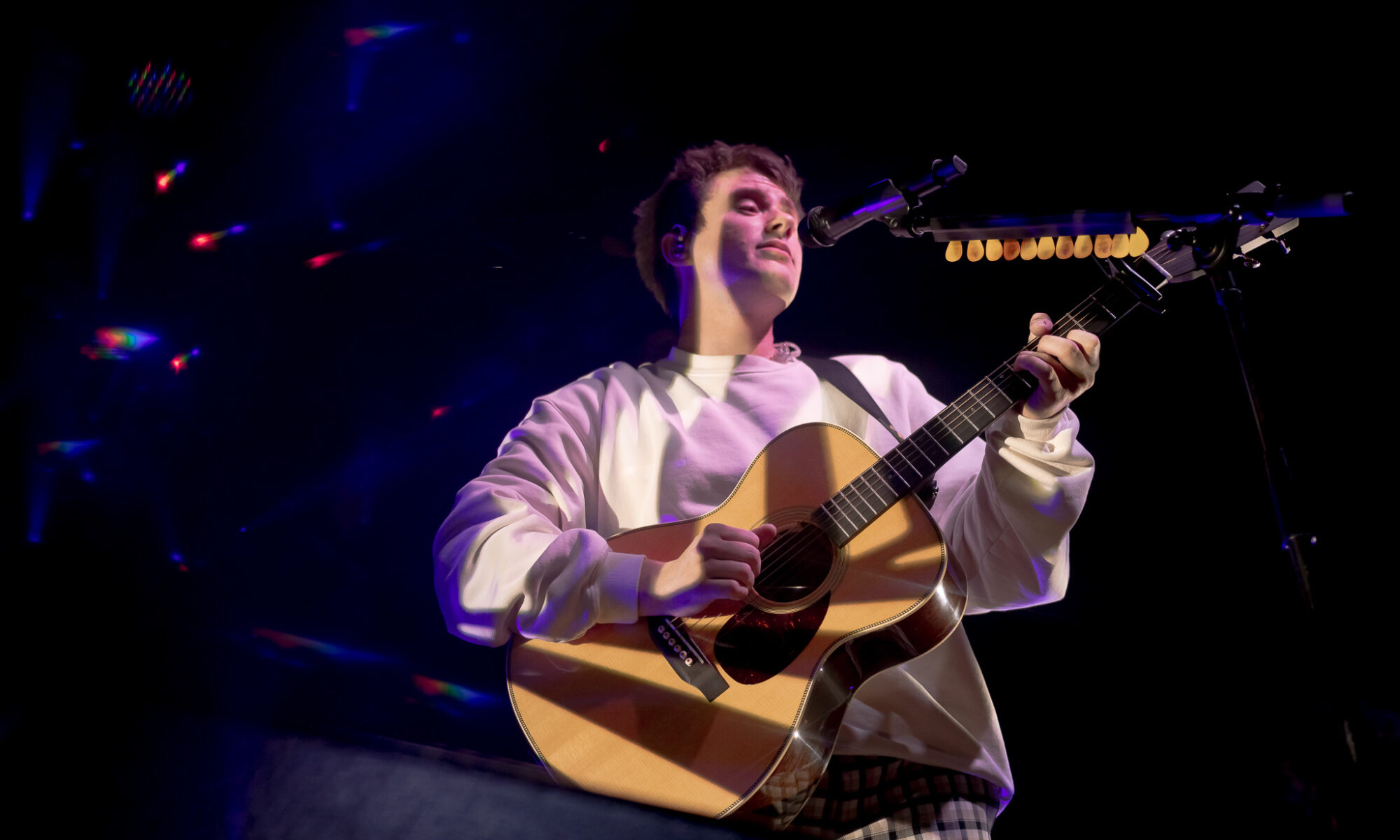 If you haven’t ever heard of Alec Benjamin or Anson Seabra, just know they’re two singer-songwriters that put so much emotion in each of their songs! Some of their songs are definitely my go-to when I want to feel something deeper and cry in the rain. But also when I’m in a good mood and just want to drive and vibe.

Anson came out on stage and when I tell you the crowd screamed, I mean they really screamed! He took a seat at his keyboard and smiled cheekily towards the crowd. One of my favorite things about Anson is that he genuinely seems so nice and is more like a friend on stage. He exclaimed how he was excited to be here in Salt Lake City, even though our lake was… a little underwhelming. But we all already knew that!

Anson explained how he’s been trying to come up with a joke or puns for every stop of the tour and said something along the lines of, “I’ve been trying to think of one for Utah, but I don’t know, you guys might get a little salty…” followed by laughter and “ohhh’s” from the crowd. It truly was cheesy and corny but that’s what he was going for. His dad jokes made me chuckle.

As he played he would occasionally do this little wave to the crowd. I thought it was adorable. Like I said, it was like a friend on stage with how much he was talking and joking with the crowd. He explained that sometimes people ask him, “Anson who hurt you” because a lot of his songs are sad or surround themes like love and loss. He responded with, “It’s really not that deep! Not always. Sometimes I just see something and think that’ll be a good song”. He used his song  “Robinhood” as an example. I really appreciated that, sometimes I think we try to overanalyze a musician’s work and wonder where it comes from.  In reality, sometimes things are just created and they’re good just because.

At one point in his set, Anson introduced his guitar player, Dan Richards. He explained that he was One Direction’s guitar player back in the day.  The crowd cheered, and I had a huge smile on my face learning this. I was the biggest “Directioner” in my time and I wondered if I had any photographs of Dan Richard from the time I  snuck my camera into the One Direction concert 10 years ago! Turns out I did have one photo of him I captured and now 10 years later I was photographing him from the pit. It was a little full-circle moment that made younger me happy. Ansons entire set was beautiful and uplifting.

The only startling thing that happened was at some point in the middle of the set a girl from the crowd shouted at me, trying to get my attention to let me know someone had passed out. To which I then ran to the side of the pit and informed medical personnel. They came and got her out. All while he was playing! That part was crazy for sure! Throughout the night a few people had to be taken out because of almost passing out. When you go to concerts please be careful, stay hydrated, and know your limits on personal space! We want everyone to enjoy it and be safe the whole time.

Right before Alec came out on stage all the lights were off and the crowd started chanting  “Alec! Alec!” Soon after his guitar players and the rest of the band came on stage as it illuminated red. Eager and excited you could see the crowd being pushed forward and people clutching the barricade. Alec ran on stage dressed in this white long sleeve and these fashionable plaided pants. He smiled at the crowd and greeted SLC charismatically. He started the night off with his new single “Older”. Fans sang every word.

Actually, throughout the night I’m pretty sure the entire crowd sang every word to every song. I love when that happens at concerts. It makes you feel more united in the moment. United with all these people that you know you share something in common with. Alec talked about the meanings to some of his songs and how there are a few songs that he doesn’t really relate to anymore. That he’s a different person now but still loves to play them anyway. He also talked about his mom a lot this night  and laughed saying, “I don’t know why I’m talking about my mom so much tonight!” It gave the crowd a laugh

Alex’s stage presence is wonderful and he genuinely just seems so happy to be up there playing his music. The Rockwell (big room) at The Complex is one of my favorites when it comes to attending shows. And I think it was the perfect venue choice. Just like Anson, Alec had a  great way of connecting with the crowd and having a conversation that seemed natural. He shared that this was his 5th time playing at the Complex.  Back then, when he played in the small room (The Grand), he told himself one day he’d play his own show in the big room at the complex.  And that’s exactly what happened and it overall was a great time!