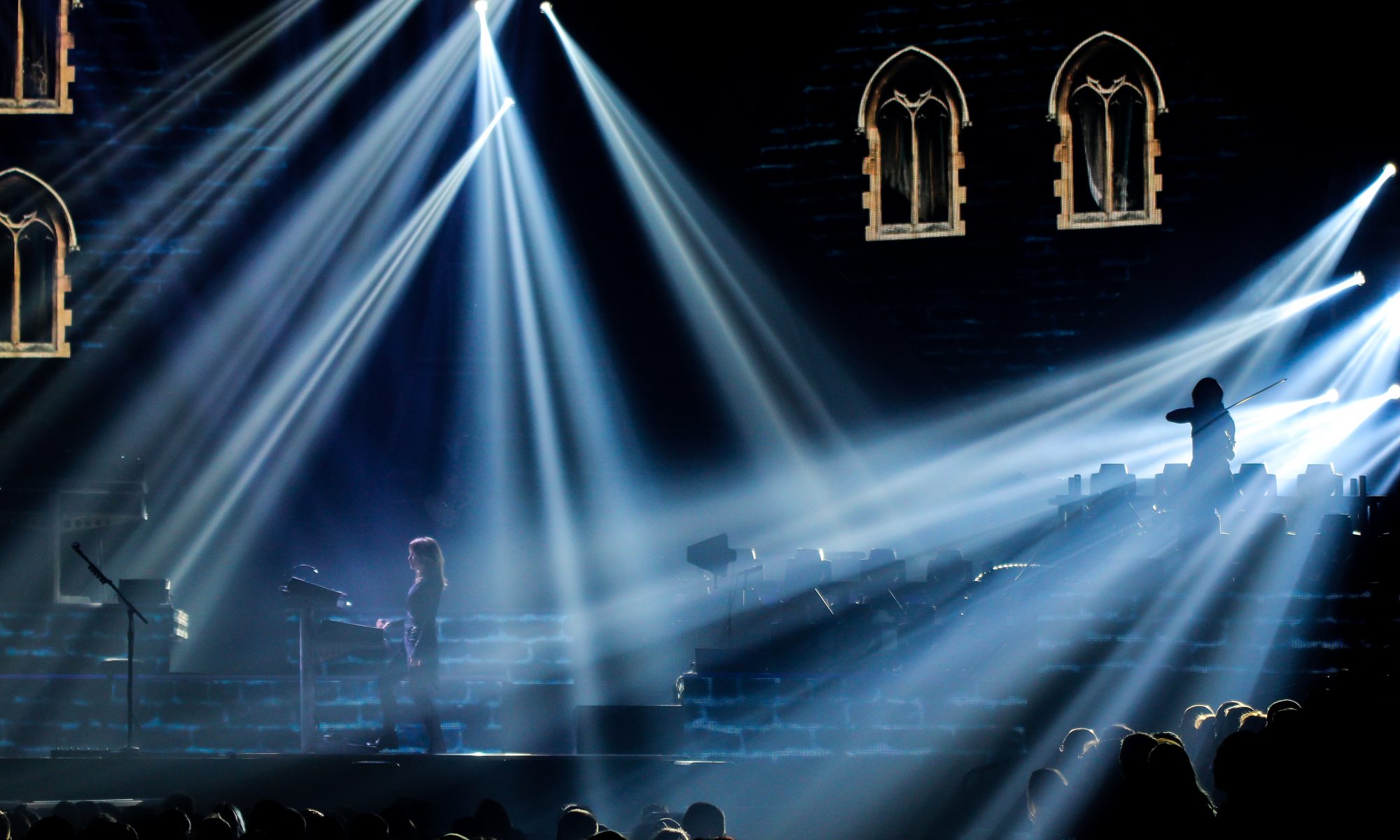 The Holiday Concert Season has officially begun here in Utah. And it seems appropriate that Trans- Siberian Orchestra starts things off here in Utah. It’s the power chord heard around the Beehive State signaling that it’s finally time to start hanging lights, buying gifts and listening to Christmas music. Exactly one year to the date, Trans- Siberian Orchestra returned to Vivint Smart Home Arena to perform their triple-platinum selling album, “Christmas Eve and Other Stories” featuring new staging and effects. Salt Lake City loves TSO. So much so that they were the first city to demand a second show. So I was there for the first of two shows in one day. The arena filled out nicely. Especially for a 3:30 show on a Wednesday.

As I looked around the crowd their faces lit up not only because of the bright lights and pyrotechnics, but it was clear that they were so happy to be seeing one be hearing some of their favorite holiday music. I could see how excited they were to see their favorite storyteller, Phillip Brandon walk on stage. His rich baritone speaking voice drew the audience in as if an entire arena filled with people were gathered around a campfire for storytime.

It’s also exciting to see guitarist and Musical Director of TSO, Al Pitrelli. He’s been with the group from the beginning. Watching him on stage it appears that he still loves doing these shows. He honors the Trans-Siberian Orchestra founder, the late Paul O’Neil by staying true to the dynamics of this show and the music. He shared with us that Utah was the first city to request a second show, resulting in TSO doing a matinee show each time they stop through town.

As much as I’m blown away by the staging and all of the effects, the thing that has truly impressed me over the last couple of years is just how strong the TSO vocal ensemble is. The ensemble is ten members strong, five women and five men. Each of them has an opportunity in the show to be featured with a solo. That’s when the real mind blowing begins. It’s impossible to decide which is better. I’ll think, “Ok, this is for sure my favorite soloist.” Then the next singer performs and I question everything. From top to bottom and from first to last, each member in this ensemble is extremely talented and could headline the entire show with their voice.

Just like seeing Petrelli or Brandon, a staple in this show is featured violinist, Asha Mevlana. I don’t know how she plays so perfectly while navigating her way across an exploding stage. There was a moment in the show where she walked down the aisle of the floor playing and smiling at the nearby fans. She would stop occasionally in front of a fascinated child and play a few measures in front of them. When she would move on I would continue to watch the child as they turned to their parents excited that Asha stopped in front of them. She’s an extremely talented musician and an intrigal part of TSO and their concerts.

It’s hard to put into words just how elaborate these concerts are. But they spare no expense in entertaining the crowd. In their performance of their signature track originated by Savatage, “Christmas Eve/Sarajevo 12/24” they have every laser imaginable fire spinning all over and their digital screen displaying more than my eyes could take in. They bring it all back when they reprise the song at the end of the show. They do this type of thing almost every song too! I don’t know how they do this every night. And twice here in Utah! The crowd loved it. They would erupt (no pun intended) with applause after every song.

Just when I thought I had seen it all I began hearing a buzzing behind me. I noticed the audience began looking to the back of Vivint Arena. When I turned my head I saw an enormous Tesla Coil towering over the arena floor behind the soundboard. With each power chord, the electricity would sizzle. Then the band began playing the melody line from “In the Hall of the Mountain King” composed by Edvard Grieg. As they played the Tesla Coil began playing the melody as well. The audience roared. It was impressive to see the electricity flow into the large ball between the coils.

It’s hard to believe that Trans- Siberian Orchestra has been doing this for over twenty years. In some ways, it seems like they’ve been around forever and in others, it seems like they’re one of the newer sounds in holiday music. Either way, it seems they’re just getting started. Judging by the success of these shows along with the millions of albums they’ve sold they seem like a band and concert that will remain a part of many family’s Christmas tradition.

Towards the end of the show, Al Piterelli asked the audience who was seeing TSO for the first time. I was amazed at the amount volume of first time attendees. He then asked who had seen TSO before and the majority of the audience roared. It’s clear to me that if Trans Siberian Orchestra keeps coming to Utah, Utah will keep coming to see TSO.